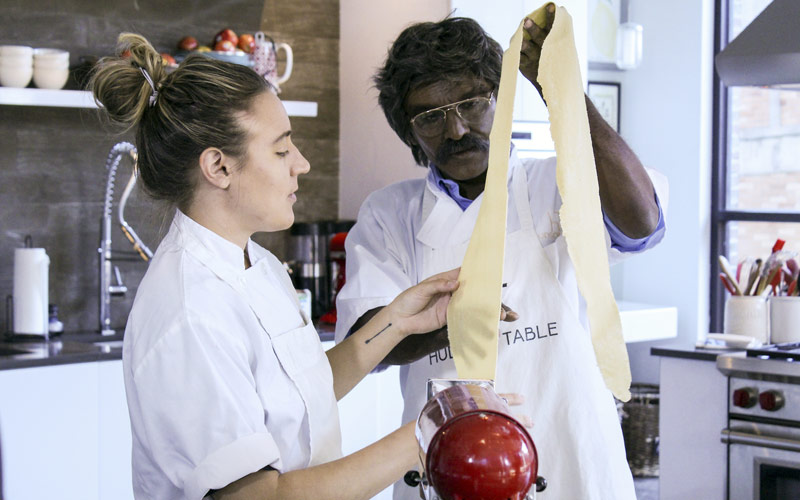 Undercover Boss, the CBS reality show that once broke reality TV viewing records, is abandoning its formula and switching to a celebrity format for its next two episodes, which air this Friday and next Friday (CBS, 8 p.m.) and carry the new title Celebrity Undercover Boss.

The big surprise is that this change seems to work very well—it’s better than the original.

Instead of bosses going undercover and then rewarding under-appreciated and under-compensated workers who producers have selected for their stories, the two celebrity episodes will have chef Marcus Samuelsson and former Blowfish and now country singer Darius Rucker “search for undiscovered talent in their own fields,” according to CBS.

The network says “state-of-the-art prosthetic makeup was used to disguise Rucker and Samuelsson so they would not be recognized, despite their fame.” Judge for yourself: Maybe it’s the photo, but Marcus especially seems to wearing makeup that would get a Face Off contestant sent home without any deliberation.

Assuming they are not recognized, despite the camera crews and the mask-y makeup, what will Rucker do when he finds “standout street performers”? What will Samuelsson do when he “discovers some gifted aspiring chefs”?

I watched Darius Rucker’s episode, and—mild spoiler alert—he meets people, hears their stories, and then reveals his identity, giving out things like guitars, education, introductions to record executives, and cash. Lots and lots of cash.

So basically, producers find some great people with interesting stories, and the show, via the celebrity host, rewards them in ways that will help them follow their dreams. Previously, producers would find great (and sometimes terrible) employees with interesting stories, and then the boss would give them some kind of reward for, well, doing their job and being under-compensated for their work.

I was always left feeling unsettled at how the show—and the bosses—showered gifts upon workers lucky enough to have been selected, and basically told the company’s other workers go screw themselves.

That’s gone in the celebrity edition. In its place is a show that profiles people who are doing interesting things, surprises them, and then helps them out. The possible consequences of the subterfuge—That’s your boss! Be careful!—are all gone.

“Darius Rucker just changed our lives forever,” one person on Darius Rucker’s episode says. Another says, “This is stuff you see on TV that you wish would happen to you.”

If Undercover Boss continues, I hope this celebrity edition will continue to happen to more people, too.