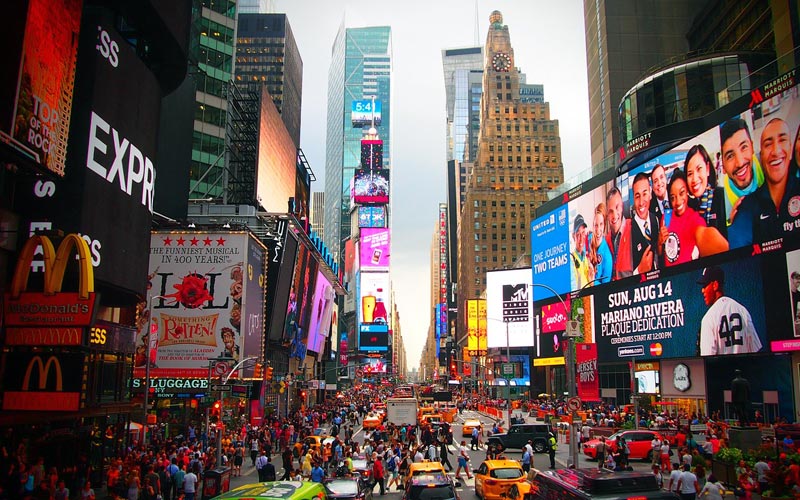 The advertisements in Times Square, which are less intrusive and noticeable than some online ads.

If you browse the internet, you may have noticed that reading content has become a rather miserable experience. Videos pop up and start playing. Ads expand and cover the content. New browser windows are created. More ads pop up. Scrolling is impossible because the page is lurching around as more ads load. You have to click “read more” as if you were on an article page to do anything other than read the article.

It’s miserable. But there’s a reason: online ad revenue is down. Way down.

So, I’ve been working with a new company for the past month, one that’s hands-on and trying to improve revenue. That’s why those of you who are regular readers may have noticed a few different kinds of ads recently. While we’ve actually eliminated some ads, there are new ones—most notably the one floating at the bottom of the page that, eek, covers some of the content.

The reason for that: advertisers want their ads to be visible. Ads that are actually seen generate more revenue; the others do not.

That’s why the new sticky ad is there. However, as I’ve always done, I made clear that I prioritize user experience over all else. I will sacrifice revenue because I don’t want readers to be turned away from a bad experience, such as video ads that play and blast sound automatically, nor will I allow low-quality ads.

I’ve only ever permitted ad products that I don’t mind using on other sites, which includes the surveys and the floating ad at the bottom—sure, they add a layer of intrusion, but overall it’s a good experience, especially compared to other options.

And I’m also clear that you, dear reader, must be in control, which is why you can easily close the ad bar at the bottom of the screen with that little X.

Ads are automatic and crazy

Here’s a fun fact: I don’t know what ads or surveys you’re seeing. Ever. (And I definitely don’t know how you’re answering surveys—those are anonymous and aggregated together by Google, and then the results are provided to whoever bought the survey.)

That’s because I don’t sell the advertising you see; I simply make the space available for ad companies, and they deliver inventory. That often happens based on a super-fast automated auction that takes place as you load a page. Those automated ads are sometimes delivered based on things such as your geographic location or your browsing history, which is why you sometimes see ads on other sites for products you were searching for.

But again, I have no idea what those are. (By the way, you can opt out of personalized ads through those third-party providers.)

This automatic, computer-driven system is why bad ads sometimes sneak through. I recently experienced one ad on reality blurred that was literally pulling focus to itself, preventing me (and others) from reading the article.

The similar, more common offender is the mobile redirect: I’m sure you’ve experienced visiting an article on a web site on your phone, and being immediately redirected to an app download or some other page, making the article impossible to read.

This is insane, but it’s very difficult, if not impossible, to track down those bad ads—and worse, neither I nor the ad company makes money off of those. (Pajiba published an excellent piece explaining that phenomenon.)

All in all, it’s a crazy system, but right now it’s the best system we have for monetizing content—for making content free to users. But publishers do need to get paid, and that includes me. So let’s talk about that.

In 2008, when I went on location with Survivor for the first of three set visits, CBS provided a tent and the press ate with the crew. But I paid for that trip. The flight to Gabon cost $3,067.10, and that was economy class. (True story: Probst was on my plane, one cabin ahead of me, on the final leg of my trip, from Paris to Gabon. I was just grateful to know one other person!)

That was also the year I joined the Television Critics Association, and started attending twice-annual press tours in Los Angeles, where I’m able to be in the room and ask questions during press conferences where networks make announcements or present new shows. I’m also able to sit down one-on-one to interview fascinating people in reality TV.

While networks often provide meals (i.e. hotel food), I pay for everything else: flights, hotel, and all expenses, such as transportation to and from airports. I mention this because even my friends think these trips are free, that these are junkets and I’m awash in cash and perks. There is sometimes swag, but other than that, nope.

Those expenses are worth it to me because they lead to pieces I’m proud to write and publish, like my behind-the-scenes coverage of Survivor. Of course, it also costs money to run a web site, with hosting being the biggest regular expense.

There’s another big expense we rarely talk about: time. Yes, my time.

There’s the time it takes to watch a show and write about it, or the time it takes to research and write a post (these weekly stories take about an hour). Interviewing someone and transcribing that interview can take hours. Even the quickest posts take a good chunk of time to produce, as does the invisible work behind the scenes to maintain a website—that’s at least a full day’s worth of work every week.

If I were to add up the hours I’ve spent over 17 years, I’ve not even come close to earning a livable salary in ad revenue. And while advertising does help, I subsidize that by teaching—work that I absolutely love, but that also provides health insurance and a regular paycheck, which I also love. (Oh yeah: I don’t get paid for ads when they run, but maybe a month or two later. It’s not clear or easy to predict.)

A lot of writers and artists have (or have to have) day jobs because our work just simply isn’t valued by our culture in the same way that other work is. That makes it embarrassing to even write things like this, because it sounds like I’m whining I need money to pay for very important things like my cats’ natural food and home storage containers at Target.

I’m actually very appreciative that I’ve been able to spend 17 years writing about a subject I love, and interacting with you, a person who shares that love. That interaction has made me a better person and critic, especially when I’m challenged to think about TV in different ways.

Where do we go from here?

I do have other options:

The only one I’m actively considering is #3, but I’m hesitant because I know that’s a big ask, even if it’s asking the equivalent of half a Starbucks beverage every week.

For now, advertising is working, bringing in enough money to pay for expenses and mostly for my time. But that, like all things, is an ongoing experiment, and I wanted to keep you updated about the changes you’re seeing. I’ll keep doing that, and of course, welcome your feedback, in the comments or privately.

Thanks for reading this and for supporting an independent writer—and for reading reality blurred. You are awesome.