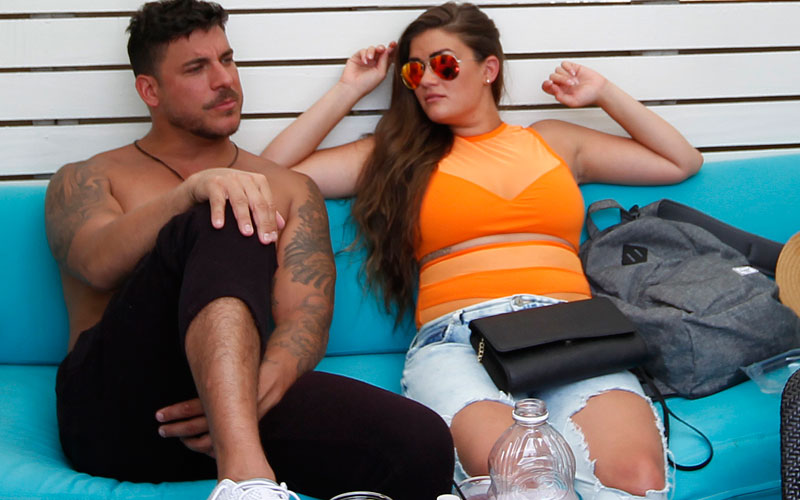 Vanderpump Rules stars Jax Taylor and Brittany Cartwright, who are getting their own Bravo reality show. (Photo by Tyler Kaufman/Bravo)

Cast members on two soapy cable reality shows are getting their own spin-off shows this summer: Vanderpump Rules stars Jax and Brittany will vacation in Kentucky in a show with a run-on title, while Keeping up with the Kardashians star Kylie Jenner will follow her in her life as an entrepreneur and person.

Both shows will have half-hour episodes, and both premiere this summer.

“…follows bad-boy bartender Jax Taylor and his southern belle girlfriend Brittany Cartwright as they head on vacation, leaving the comfortable confines of Los Angeles to visit her family on their Kentucky farm.  Ditching his signature chunky sweater for overalls, city-boy Jax is the ultimate fish out of water as he tries to embrace the southern lifestyle and make a lasting impression on her family and friends.”

The “this season on” preview makes it seem like season one of A Simple Life, when Paris and Nicole worked on a farm, with plenty of gawking at southern stereotypes thrown in for extra drama.

Life of Kylie will be produced by Bunim/Murray Productions and Ryan Seacrest Productions, and E! says it will:

“…follow Jenner as she navigates her unique life as an entrepreneur, fashion designer, author, television star, style icon and CEO/Founder of Kylie Cosmetics. Life of Kylie will document not only how she spends her professional time but also her personal time,  including hanging out with close friend Jordyn Woods. After spending over half her life on TV on E!’s hit series Keeping Up with the Kardashians, and with over a hundred million followers across Instagram, Twitter and Snapchat, people feel they already know Kylie, but this series will allow her fans and the public to see behind the scenes of her ever-expanding world.”

In a press release, Kylie called it “a peek inside all of the exciting things I am working on as well as some personal time with friends,” which I guess sounds better than a heavily orchestrated half-hour advertisement for my products and personal brand.