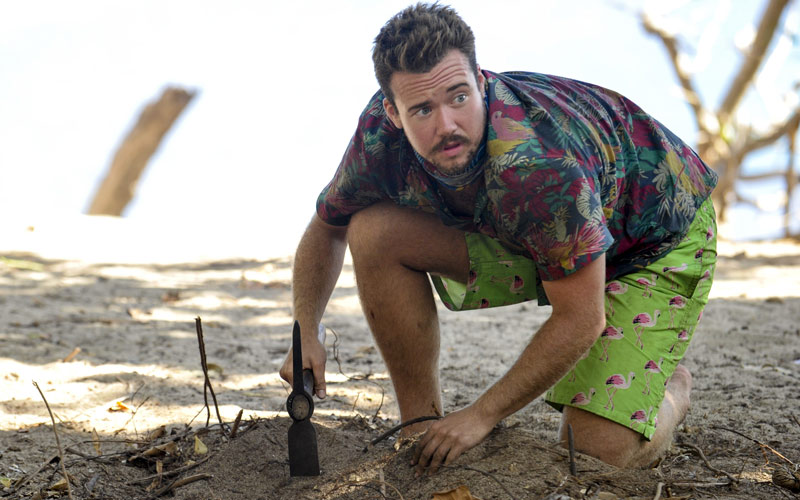 Zeke Smith during episode 7 of Survivor Game Changers, during which Jeff Varner outed him. (Photo by Jeffrey Neira/CBS Entertainment)

After Zeke Smith was outed by Jeff Varner on Survivor Game Changers, there was a lot of conversation on social media, and a lot of reaction to the episode, including my own.

But there were also several pieces that were published immediately or shortly after the episode aired that provided context and voices that we need to hear from—especially, of course, Zeke himself.

It’s worth noting how atypical it is for Survivor to allow a non-eliminated contestant to talk about the show while it’s in progress, and it’s good that CBS relaxed its rules in this case. And it’s also obvious that there was a media strategy here, to have pieces and responses planned in advance. I think that was a smart decision, because we absolutely need more informed conversation.

‘Survivor’ Contestant Opens Up About Being Outed as Transgender

The most important reaction to last night’s episode is, of course, Zeke’s. And in this absolutely beautifully written, thought-provoking essay for The Hollywood Reporter, he discusses not just to the episode, but about so much more, from his identity to his current relationship with Varner to the role Survivor plays in his life.

An excerpt from his piece, which is an absolute must-read:

“After graduating and moving to New York, no one knew me or saw me as anything other than Zeke, which was tremendously liberating — my whole life, I desired my manhood to be known without question or qualification.

Many gay people consider coming out a moment of liberation, because sharing their sexual orientation with the world causes them to be seen more authentically. Often, the opposite is true for trans people. When we share our gender history, many see us less authentically — doubting, probing or denying our identities.

As someone who is not readily perceived to be trans, I possess a great deal of privilege, both because I can control — well, used to control — who knows my gender history, and also because I don’t experience the same type of discrimination, or even violence, that more visible trans people face — especially trans women of color.”

Outed as Transgender on ‘Survivor’ — and in Real Life

Another reality TV star also weighed in—though while you may recognize Jennifer Finney Boylan from her appearances on Caitlyn Jenner’s E! series I Am Cait, she’s also a professor and has been widely published.

She wrote in the New York Times about the episode and about being trans:

“But a trans identity isn’t a secret. It’s private. There’s a difference. Not revealing one’s private medical history doesn’t mean that someone isn’t who you think they are. Zeke Smith wasn’t hiding his identity. He just didn’t think it was anybody’s business. There are many people like Mr. Smith, who live in what used to be called “stealth.” But since that word implies, à la Mr. Varner, that transgender people are deceptive, it’s not as common today. In writing my most recent novel, about a woman whose family doesn’t know her history, I talked to a woman whose husband did not know his wife was born a different gender. She resented other people moralizing about her choice. “It’s not about who I was, it’s about who I am,” she said.

And yet, the ethicist in me believes that there comes a moment when self-disclosure is indeed necessary. For some, this moment comes before sexual intimacy. For others, sexual intimacy is less the point than the emotional kind; I know a woman who has no qualms about sleeping with men who don’t know her history, but the moment she finds herself falling in love, she feels morally obliged to share it.”

In his weekly EW Q&A with Dalton Ross, Probst doesn’t quite give behind-the-scenes details about the show’s approach to this, but he does write about what he was thinking in the moment.

“Witnessing that moment was so powerful because from my seat at Tribal, I could see it all. Varner was in the middle being attacked by angry tribemates while Zeke sat in the corner, outside of the action in what appeared to be a mild state of shock. It was one of the most surreal moments I’ve ever encountered on the show. From the outside, it looked and sounded like a regular Tribal Council but in reality, it was one of the most raw and painful studies of human behavior that has ever happened on Survivor.”

GLAAD, which works to “shape the narrative and provoke dialogue that leads to cultural change,” says it played a role in Zeke’s response. The organization specifically mentions The Hollywood Reporter story above, an interview in People magazine, and an appearance on The Talk:

“GLAAD’s Transgender Media Program worked with Zeke Smith and CBS for several months to ensure that when the episode aired Zeke would have the opportunity to speak for himself about his experience.”

GLAAD also called the episode “a gut-wrenching look at the consequences of outing a transgender person against his will.”