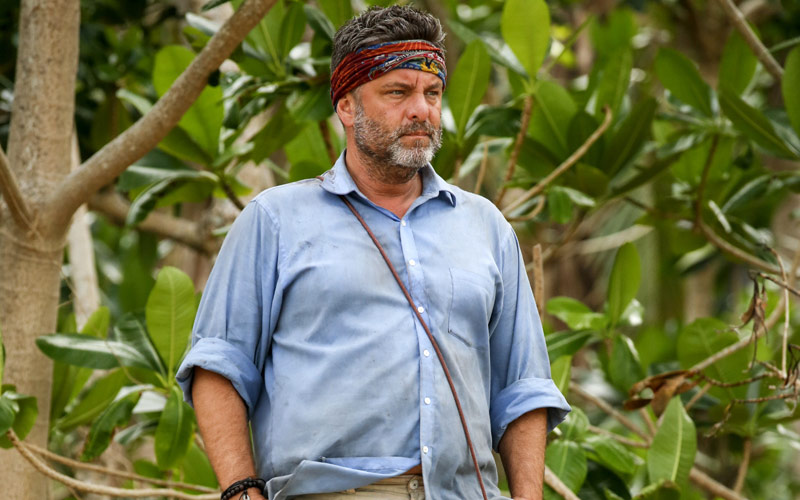 “Nobody on this planet should do what I did tonight, ever, ” Jeff Varner said after he was sent home by Probstian decree on Survivor Game Changers.

It’s worth considering whether Survivor should have aired what he did to the planet. But it’s clear that, even in the moment, host and showrunner Jeff Probst found value in the moment, calling the episode “a complicated, beautiful night that will never be forgotten.”

I wouldn’t use the word “beautiful.” I’d use words like ugly, horrifying, regrettable, and terrible.

The terrible, horrifying, and regrettable moment was foreshadowed several times, but most specifically in an interview, when Jeff Varner said, “I know something about Zeke that nobody else has picked up on. It’s insignificant to this game; it means nothing. But this is not the guy you think he is. There’s something else here.”

Even in those three sentences he introduced a contradiction that’d continue throughout Tribal Council: it doesn’t matter but it matters so much I’m going to use it.

At the end of Tribal Council, Zeke magnanimously said, “Maybe this will lead to a greater good.” Let’s hope—perhaps it will reach some of Survivor’s bigoted fans.

But it still should never have happened.

Midway through Tribal Council, Jeff Varner tried to save himself by claiming that there was “deception” on Zeke’s behalf. He turned to Zeke and said, “There’s more: Why haven’t you told anyone you’re transgender?”

Andrea started crying. Probst was silent, for once. Everyone looked stunned.

There was a lot of conversation that followed. I was somewhat thrown off by Probst’s approach, and annoyed. On television, in the edited version of these events, Probst didn’t address Zeke directly first.

Instead, Probst actually talked about him in the third person, about the way Zeke was staring into space. That’s when I thought: Maybe then don’t turn this into a talk show moment and instead make a decision as a human being to shut it down?

While Zeke did talk about wanting to be identified for his game play and actions on Survivor, not for his transition or for making Survivor history, the attention was mostly on Varner and his terrible choice.

The show did spend a disproportionate amount of time on Sarah—with sad music playing in the background—talking about “the metamorphosis that I’ve made” about her perception of gay and transgender people. While her heart was in the right place, she also said this unfortunate sentence: “I’m sorry that it came out that way but I’m glad it did, and I’m so glad that I got to know you for Zeke and not what you were afraid of us knowing you as, and I’ll never look at you that way.”

Who says he was afraid of it? And look at him what way? And why would she not want to know him as trans? Again, I think she was being supportive, and I know I’m being picky, but words matter in these situations—especially when those words are broadcast to millions. And I worry that some people will take those words literally.

There did seem to be universal support for Zeke and disgust toward Varner’s actions:

During most of Tribal, Varner said continued to dig his massive hole while trying to climb out of it, saying things such as “it has nothing to with the game” after making it part of the game and “I would never say or do anything to hurt anyone here,” which he said after hurting someone.

Some of his other contradictory statements:

It was this attempt to defend oneself instead of just admitting fault is, yes, understandable and human—we’ve all probably done that at one point—but it also made Varner seem not all that sorry. It also just pointed out again and again how awful and stupid and thoughtless that decision was.

In his exiting hug with Zeke, and in his closing words, Varner finally apologized through tears: “I’m so sorry to anyone I offended—especially Zeke and his family and his friends. I can’t even talk. I’m sorry.”

Before I react more, I think it’s important to acknowledge that, as of the broadcast of the episode and the writing of this recap, we’ve only seen the edited version of Tribal Council. (Tribals typically last 45 to 90 minutes, and even with an extended Tribal Council such as tonight’s, there’s a lot that’s edited out.)

If he did, that would change my current thinking. But as of right now, I’m not convinced this should have aired.

Of course, not having a vote boxed them into a corner: they couldn’t just skip to a normal vote and show that, because there wasn’t one. For this reason and many others, I think Probst discarding the rules and basically announcing that Varner was leaving, and then half-heartedly getting confirmation from the tribe, was both a bad move and bad precedent.

If Varner was going home anyway, which seemed like the obvious outcome, Survivor could have just shown a normal vote, skipped the Zeke conversation, and still had a coherent story that was accurate.

I’m usually for telling the truth and being as honest with viewers as possible. And I recognize that this may reverberate throughout the game, so perhaps it was unavoidable. But I most firmly believe that the decision to talk about identity, and sexuality, and everything else should be up to each person alone.

And Survivor cuts things out all the time. The story producers and editors selectively choose moments and scenes to craft the narrative they want, even if it doesn’t agree with the reality of what occurred on the beach.

The way Varner left did create a difficult situation for the show. But I’m still not willing to let Probst and CBS completely off the hook. We cannot pretend that contestants control what is seen on television.

Was this Jeff Varner’s favorite moment?

Before the season began airing, Varner posted a video about his favorite Survivor moment. Here’s what he said, in part:

“The 500th episode—CBS wants us to talk about our favorite moments in celebration of it. […] But my favorite moment in Survivor history has yet to be aired. How ’bout that? This has been a traumatic situation for a lot of people involved; this show is very difficult for us. And it might be difficult for you at a couple of points. So I just want to say that it’s an ugly game, and we can all do good with that if we try. So yeah, that’s coming. We’re here. It can’t end until it begins.”

Was he talking about what just happened tonight? “An ugly game”? “A traumatic situation”? Those sound like what we just saw.

I really hope that outing someone as a desperate move in a game isn’t Varner’s actual “favorite moment in Survivor history,” because it’s actually one of its lowest moments.