“It’s been 16 great days, Jeff, but I think this is it for me,” two-time Survivor winner Sandra Diaz-Twine told Jeff Probst at the start of Tribal Council.

And then—and then she turned the tribe agains Tai with a single question, and he was voted out, holding not one but two immunity idols.

Okay, that’s not what happened. That’s what I wanted to happen—and what I truly thought would happen. Because at the end of another insane Tribal Council, I followed everything that happened during it, but I have no idea how the tribe decided to stick with their original vote: finally getting rid of the queen.

I wasn’t even worried when the edit included a lot of Sandra saying things like, “I ain’t even scared” (to Varner) and “Once I get my feet wet, give me a day or two, and I’ll be running the show over here too. The queen stays” (in an interview).

She’s said that before and she’s overcome threats before. And as I mentioned, she seemed like she was doing that again.

In a spectacular moment, she went from joking with a paranoid Tai (“I’ll vote with you Tai”) to convincing him to whisper a plan into her ear, though she continued to make a joke out of it (“Just don’t whisper my name”). Keep in mind that Tai was holding two idols—found by splashing boards with water, after which he said the innocent but wonderfully dirty “The last board I wet, there it comes”—which made him more paranoid.

Tai told her to vote for Ozzy, and Sandra immediately mouthed “Ozzy” and then pointed at him, all while Tai was whispering Ozzy’s name to Varner.

“There’s only three of us. You need one more,” Sandra told him. Tai’s apparent betrayal had the others in a momentary tizzy: “Should we change?” Zeke asked Ozzy.

But they did not.

“Sandra, for the first time in 94 days, the tribe has spoken,” Jeff Probst said—and the tribe that just succeeded in voting out the queen applauded her.

“I think I did good for 16 days considering I’m a two-time winner,” Sandra said in her touching and straightforward exit confessional. “I know why I live the life that I live, and it’s because of Survivor. There will never be another two-time winner except the queen.”

The queen does stay queen 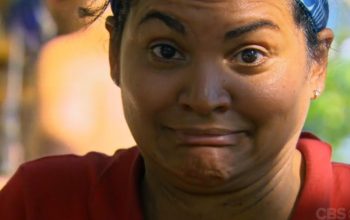 Sandra’s look to camera was one of the highlights of Survivor Game Changers episode four, “Dirty Deed.”

Sandra’s 16-day run on Survivor Game Changers, never mind her previous two victories, was wonderful to watch as she dispatched threat after threat, and also gave us moments like the one above.

She’s played for 94 days and prior to tonight, she’d received a single vote against her, and received only two others (which were nullified)—and all of those were during two late episodes of Survivor Heroes vs. Villains.

“Without a doubt, Sandra is the best player here,” Aubry said at the start of the episode. “She is the queen of this game and I need to learn a thing or two from her.”

Even though she was voted out, I’d argue Sandra proved that one last time by figuring out exactly what was going on in her new, post-merge tribe, realizing that it made no sense for them to target Tai instead of her.

Her effort to convince them that Tai + Aubry + Debbie were a threat was, however, not exactly the most convincing argument she’s ever made. Still, combined with Tai’s loose lips, Sandra almost saved herself. Almost.

And don’t even get me started about how Jeff Probst and his Bag of Game-Changing Twists was ultimately responsible for her exit. This tribe change-up gave us:

How’s that for a shitty twist?

Exile, now with luxury and presents

“You cannot bond with anybody,” Probst told Debbie after she drew the nonexistent buff and learned she’d be sent to Exile. It was a sentence that didn’t need the context of Exile to make sense.

As Debbie quickly discovered, though, being sent to Exile was actually a reward: It was not an empty island, but a boat full of comfort that a strange list:

Meat and salads? That made me laugh, because non-parallel lists are hilarious! One is so vague and one is so specific!

Thankfully, Debbie chewing and talking with her mouth full (“yum yum yum”) was interrupted by a boat with a visitor: John Cochran, Survivor Caramoan winner.

Cue an entire act—commercial to commercial—of awkward conversation about strategy between a master strategist, the best player to ever play Survivor, and also Cochran. Clearly, this boat was on loan from the river Styx.

It was an eye-rolling waste of time, with Cochran making wild assumptions about other players based on Debbie’s limited information. She definitely did not take advantage of being able to talk to someone outside the game about the game.

Besides meat, salads, and a vest-less visitor, Debbie also received an advantage. But it wasn’t one advantage. Oh no, not this season. Instead, it was a choice between three: a fake immuinty kit, an extra vote, and an advantage for a tribe in a challenge.

Debbie chose the extra vote, which is the smartest game move I’ve seen her make in two seasons.

Then they gave her a taser and a permanent immunity idol necklace, and a bat to break any contestant’s knee she wants.

So, individually, I like these options: a comfortable night on a boat. A choice between three advantages. (Not the visit from Cochran. I love Cochran but no. Nope nope nope.)

Maybe I should be more specific: I love Survivor for trying something new each season, not every other act break.