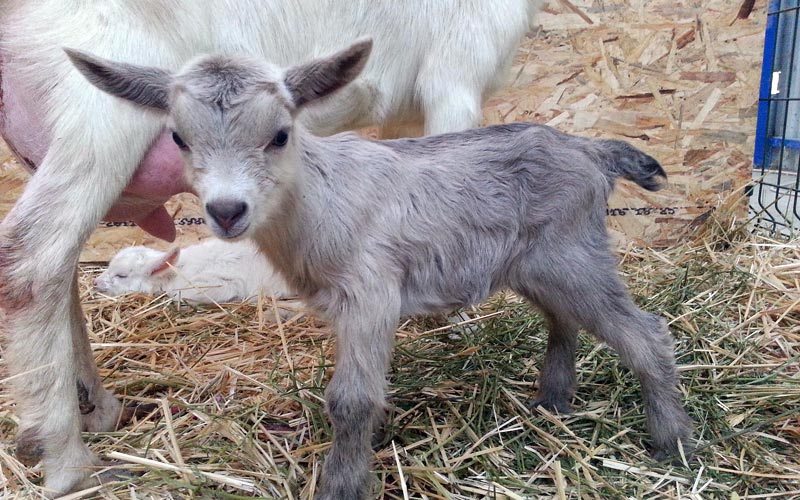 A stock photo of a baby goat, probably not related to the baby goat that was eaten on Survivor.

In one of her exit interviews today, Survivor Game Changers cast member Sandra Diaz-Twine reveals that the baby goat and its mother did not run off into the sunset to live out their lives at the Nuku tribe’s camp. Instead, after keeping the goats in captivity overnight, the tribe ate them—starting with the baby.

“And then we catch the goats. Well, they caught the goats. And we actually kept the goats for overnight and they were like ‘Baaaaaa…’ all night long. And so the mom, she wasn’t eating the food we were giving her. She wasn’t drinking the water. She wasn’t letting the baby nurse. And the baby was tied up too right next to her. J.T. made a rope. And then they were getting tangled around each other or the tree. So then the next day is when we decided, ‘Okay, let’s get rid of them.’ Mind you, I’m not a farmer. I’m not the guy who said, ‘Well, guys, we have to eat the baby first because it’s not nourishing and it will die, and the meat is tender.’ You know, like, ‘The meat is more tender on the baby than the mama so the baby has to go first.’ I’m just repeating everything I’m hearing, and then they just catch me off guard, you know?

But, I would have to say that the next episode when you got to see us eating these big pieces of meat? That is not fish and that is not chicken. And that’s the last I’m going to say about that.”

To recap: they caught the goats, the goats didn’t eat, the tribe at the goats, starting with the tender, juicy baby.

Even though I’m a vegetarian, I don’t see anything inherently wrong with that—in fact, killing and eating an animal is vastly more humane and healthy than meat that comes from our industrial system.

Yes, it’s sad that a baby goat died, but if you’re not a vegan and you’re sad about baby animals dying, maybe don’t ever eat eggs, because egg production leads to this horrific practice.

The real problem for me is that the edit used this to turn viewers against Sandra, making her seem like the villain who wanted to kill a goat.

We do know that she did want to eat them. She said, on camera, “That’s what they’re here for: human consumption.”

The tribe seemed to rule against her and let the goats go. But Sandra’s version is that this was entirely a J.T. effort:

“…when we go to this new Nuku tribe, J.T. takes us to this area where there’s a trap already set up to catch the goats before we even stepped foot on that island. And the goats are actually on the other aide of this big rock by where the water well is. So anyway, he starts talking about the goats and saying they can get really close up on these goats. I never said, ‘Go get me a goat or else!’ Because I really took a hit for that one.”

Of course, this is Sandra’s version of events, and she’s telling the story now, after the edit has affected how people perceive her. But the editing definitely made her seem like the outlier; Malcolm told the camera, “We won’t kill ’em, because we have a conscience.”

The fact that the editing completely misled us about the goats’ fate—never mind 17 years of other examples—makes it clear that factual reality isn’t getting in the way of the story Survivor producers want to tell.