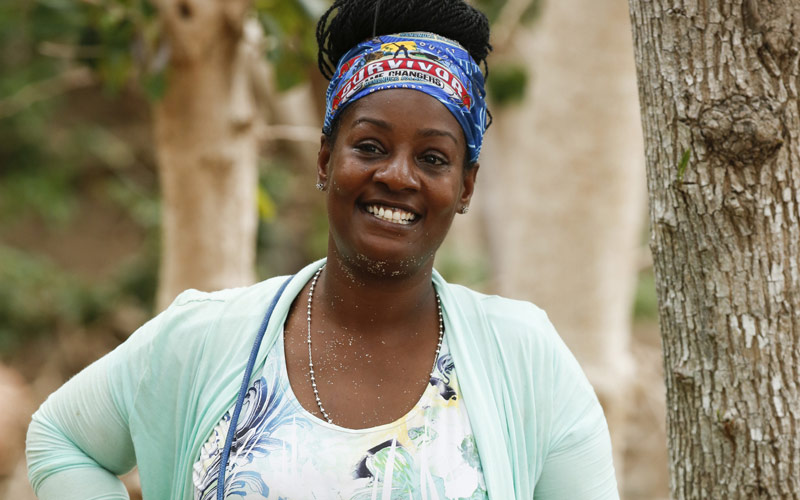 Cirie Fields in the first episode of Survivor Game Changers, before she made Survivor history. (Photo by Robert Voets/CBS Entertainment)

After the reward challenge concluded on Survivor Game Changers, Cirie Fields was still at the start of a balance beam—one that was floating on water, proving to be such a challenge for many of the contestants that some people ended up crawling across it. Cirie tried repeatedly but couldn’t make it.

“This challenge is over but we will stay here with you if you want to try to conquer this,” Jeff Probst called out, a reversal of his usual you failed, go away response. Several people swam out to support Cirie emotionally, and she tried again and made it across.

“That is what happens when you believe in yourself. Anything is possible!” Jeff Probst crowed. “One of the most powerful moments on Survivor.”

Clearly, Cirie was emotional about her eventual success, and I appreciated what she had to say about trying even if you fail.

But Probst and Survivor both missed an even bigger success, which happened last week but happened invisibly to viewers.

Cirie and Michaela made Survivor history

What wasn’t acknowledged was this: Cirie and Michaela making the merge was the first time in Survivor history that two black women made it to that point in the game.

Last week’s episode gave us time with them bonding, yes, but until I saw Michaela mention this on Twitter, I didn’t even recognize that this kind of scene would just not have been possible in the preceding 33 seasons.

Why did it take 34 seasons for that to happen? Why didn’t I even notice last week?

There are many factors, starting with casting (there are far fewer black women than white women, and many seasons haven’t even had more than one black female player) and including the role of implicit racial bias (last season, for example, every single pre-merge vote was a woman of color except for one white man).

When Michaela pointed out this milestone, some fans reacted with hostility (“fuck me for seeing people as people and not as some racial category”) and others in ways that illustrated their privilege (“There are black people on Survivor? I see past skin color and never noticed.”).

Those reactions illustrate why it’s important to at least acknowledge it on television. Survivor may work hard to avoid issues of race in its edit, but it absolutely not a game or a show that is devoid of race.

Just as Zeke and Survivor used his outing to help educate viewers, so, too, can acknowledging what happens, whether that’s women of color being systematically voted out last season, or Michaela and Cirie’s success in the game.

An alliance topples and coleslaw returns

The actual best reward challenge-related moment for me was what happened at the reward, which was Aubry referencing her “coleslaw” GIF moment from her previous season:

She turned, with coleslaw dripping out of her mouth, and said “coleslaw.” The edit cut away fast, and that’s too bad, because it looked like she was about to laugh.

Aubry also had my second-favorite line of the episode, which was a key moment in the game: “Go fuck yourselves.” That’s what Aubry told Michaela after Debbie condescended to her about the six-person alliance, leading eventually to another great prop comedy moment for Michaela as Debbie was voted out.

Of Debbie’s many jobs that help her play Survivor, being a dictator is not one of them. She said at Tribal Council that the alliance works “through dialogue, respect” and “everybody takes a turn, everybody speaks.”

But Debbie not even talking to Sarah contributed to the alliance’s downfall; Sarah realized she was at the bottom, and banded together with those who were on the way out—and were even targeting one another, in the case of Andrea and Zeke. That all those players managed to put aside their immediate beefs and join together in getting rid of Debbie was pretty wonderful.

Sarah is emerging as a savvy player, discovering and covertly acquiring a secret advantage after the reward challenge.

Michaela’s annoyance and frustration at not being picked to participate in the reward challenge (“they some bitches”) seemed to contribute to her completely missing that this was actually an advantage—there was literally a giant parchment with “SECRET ADVANTAGE” written on it that was inches from her the entire challenge.

The advantage: another extra vote, this time with the ability to take away another player’s vote. While not a single extra vote has ever made a difference on Survivor, Sarah promised that “I will be the first one to play this vote correctly.” And the fact that her extra vote takes a vote away from another person means she has more of an opportunity to actually affect the game.

As the preview for next week suggests, this week’s coalition is short-lived. I’m appreciative of these players’ willingness to take a risk—and for Survivor’s evolution as a game.

It wasn’t that long ago when someone in a majority alliance would just stay safe and let their group pick off the others, eventually making it impossible for those in the alliance’s outer circles to ever make a move against their own alliance. It’s so much more interesting to watch a game that’s much more in play. Coalitions for the win!