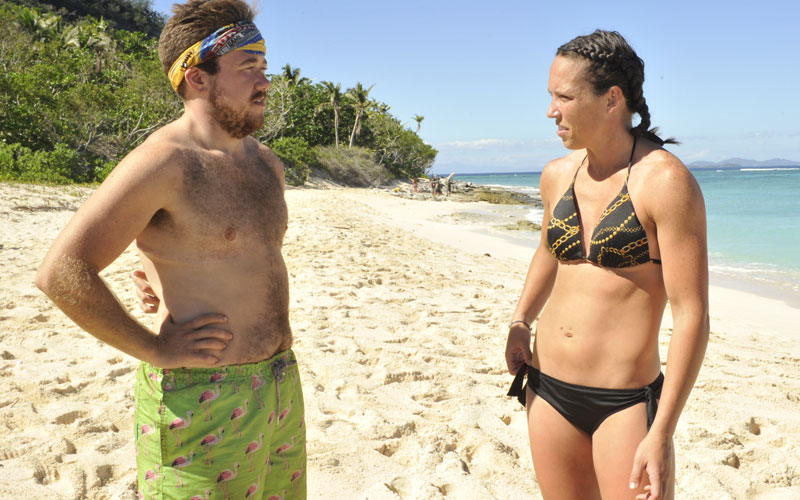 “Really wonder how Zeke’s story would have played on Survivor 15, 10, even 5 years ago.”

“I can’t prove it, but I suspect the ‘he was deceptive’ argument wd have found purchase in, like, 2002”

That’s a sobering thought. While Zeke himself has been greeted with largely open arms, from his fellow Survivor Game Changers cast members and from viewers, his outing came at a time when there is at least more awareness about transgender people. We’re a long way from full acceptance, as the North Carolina legislature keeps proving, but we have come far.

I had some evidence that Poniewozik’s thesis was correct, and that was in my own writing, a long-forgotten story. Hours before Poniewozik’s tweet, someone on Twitter pointed out to me another tweet that I never saw: it linked to a story I’d written in 2002 and challenged me about it.

In my reply to Poniewozik, I explained, over two tweets:

“I absolutely agree. Ironically, someone surfaced a 2002 post I’d forgotten about in which I highlighted a message board speculating about someone’s gender identity and basically argued that was fair game. I had no idea what I was talking about—nor any reference for it.”

The post I’m referencing is one I don’t remember writing, one of the 14,000+ stories that are in the archives here but that my brain hasn’t kept track of.

(I’m not going to link to that story, though it’s still available if you have a strong need to find it. I considered deleting it, but I also strongly believe in not unpublishing content, in part because I want to be held accountable for my words—though I’d likely make an exception in this case if the person it referenced asked me to remove it.)

What I’d done, though, was surface message board speculation about a Survivor contestant’s sex and gender identity. This was the early years of reality blurred, when I mostly linked to things I discovered online and wrote brief, often snarky summaries.

I mocked what I’d found, putting “evidence” in scare quotes. But the headline I wrote did turn that person’s sex into a question (e.g. Is Andy Dehnart actually a woman?). And the part that was most difficult to read was the last line:

“If anything, this is further proof that if you apply for a reality TV show, you have to be ready for everything and anything to be said about you.”

There’s a degree to which this is a version of the argument Jeff Probst made in interviews last week: Zeke and Survivor’s producers knew this could come up, they just never expected it to come up like this. And I still see a valid point in the fact that going on television changes someone from a private figure to a public figure—a celebrity.

But Zeke’s experience on Survivor has made it even more clear to me that there are lines that shouldn’t be crossed, even with people who’ve consented to being on TV and having their lives broadcast.

When I wrote that post, I was writing with no knowledge. I knew one who’d transitioned, and had very little knowledge about the complexities of gender identity. Out transgender people, or people who identify as transgender, have been represented on reality TV more frequently over the past few years, but the first out transgender person I’m aware of to appear on U.S. reality TV was at least four years in the future when I wrote that post.

The archives here stand not just as documents of reality TV’s evolution, but of my own thinking about it, including uncomfortable, even offensive opinions I’ve held or thoughts I’ve had. They remind me that I still have growth to do. I still struggle, for example, to lead my reactions to things with empathy rather than judgment.

Last week, I reacted too strongly to Sarah’s Tribal Council comments, and thinking about all this, one key reason may just be that I recognized some of my former self in her, even though on the surface I’m pretty much the opposite of a straight female midwestern cop. But in different ways, we’ve both learned from our reality TV experiences.