Skip to Content
(Pretend) money burns on episode eight of MTV's Stranded with a Million Dollars.

Stranded with a Million Dollars contestant Alex Apple is writing about each episode of the MTV reality competition for reality blurred. If you have any questions for him, comment below or send them via this form.

Now things are getting exciting. Ten days from the end, tensions could not be higher on the island in episode eight “No Money, Mo Problems” of MTV’s Stranded with a Million Dollars.

The final four, divided into alliances of two versus two, are filled with mistrust for one another, skepticism over the other side’s next move and bewilderment at their opponents lack of intelligence. Intelligence, in this case, is in the eye of the beholder.

No pot, no problem

The previous episode left viewers with a bit of a cliffhanger as the pot was stolen by our opponents hoping to starve out Gina and me or force us into dehydration.

Cody is laughably obsessed with what he perceives as our dehydration. Unfortunately for him, each camp has dozens, if not hundreds, of water sources, if you just know where to look. As the tide recedes in Fiji, fresh water springs up through the sand in small running ripples.

In order to obtain water, all one has to do is test the small streams coming up through the sand. At least half are fresh water, good to drink, purified by the sand.

Upon arrival at camp eight, the short-sighted play to dehydrate Gina and me hit another roadblock. There is a giant freshwater stream extending from a waterfall deeper into the jungle. The water moves at a fast pace and is fit for drinking without having to boil it.

In reality, camp eight might have been one of the times we were most hydrated. I recalled an old Survivor contestant saying that if you drank enough water, you could almost trick yourself into feeling full.

I get a number of messages about what we were eating on each day at camp.

By day three of camp eight, Gina and I had gone several days without a substantial meal, but we were not without sustenance. We were eating leaves from cassava plants that were spread across the camp, and I also found some cassava root (which tastes like a bland potato) that Gina and I roasted and shared.

We used one of the spikes that was supposed to hold the tent into the ground. We could put the circular cassava on the spike and use a stick to position it over the fire. When I signed up for a survival show, I assumed I might have to eat something far more nasty than cassava, so we were fortunate the land provided us such a tasty resource.

I would also go to the water source in the morning and look for shrimp. They are quick as can be and stay hidden under rocks much of the time, but if you are quick and estimate the light refraction in the water correctly, you can catch them with your hands. I spent a good deal of time catching shrimp for Gina and me—although Gina was nice and normally let me eat them.

Due to the relative brevity of each episode (four days boiled into 44 minutes of entertainment), cut for time was my attempting to catch fish with a rudimentary trap akin to what the locals would use (like this guy is making here). The reason I did not duplicate this effort more frequently is it’s hard to assess the best place to build it, and it requires a lot of energy to get the rocks moved and set up.

Come group buy time, I had crafted a proposition to give our opponents: Buy us some peanut butter, carrots and a tiny pot for around $20,000, or we would rip up a sum much higher.

As Cody likes to say, “what Alex doesn’t realize is that’s his money too.”

Oh, I realize that. I wanted to see how far they would go to try to starve Gina and me out of the game. Be thankful they are not your accountants because what they failed to realize is that it was their choice: spend a small sum or lose out on a big sum. We had them cornered. And hey, a hearse doesn’t come with a luggage rack.

One does not have to like or support the strategy to see the conundrum it presents to our opponents. Even as my alliance tried to make life tough on other players early in the game, we always bought them food—we never took it to the level of trying to starve them out.

Alas, it was a shame that our opponents made Gina and me follow through on our threat. As I lamented while ripping up the money, it was a great shame. (Keep in mind, we’re not ripping real currency. Might as well have been chocolate coins. It merely represented our prize at the end).

However, you have to stick to your principles and stand up for yourself. In a cutthroat game, you better be ready to up the stakes, or you will get swallowed.

Clearly, everyone could use some “serenity now” courtesy of Frank Constanza at this point in the game.

One of the most difficult parts of competing in any high-stress, high-intensity reality show is dealing with the downtime. While something happens every day in camp, it may only take an hour or two, and then you’re left to do as you please.

In a scenario like camp eight where each of us really only has one other person to talk to, you have to keep your mind occupied. I am active by nature, so I tried to move around, look for food, go get water, gather sticks for a fire, etc.

Each move at this point in the game is calculated to simply get myself one day farther in the game. By the end of camp eight, we are eight days from winning, but each day gets longer and longer.

You have to gut through it and tell yourself: if you are set to make between $100k and $200k at the end, you’re making several thousand dollars per day if you just sit out there and suck it up. Too bad, it’s not always that easy. 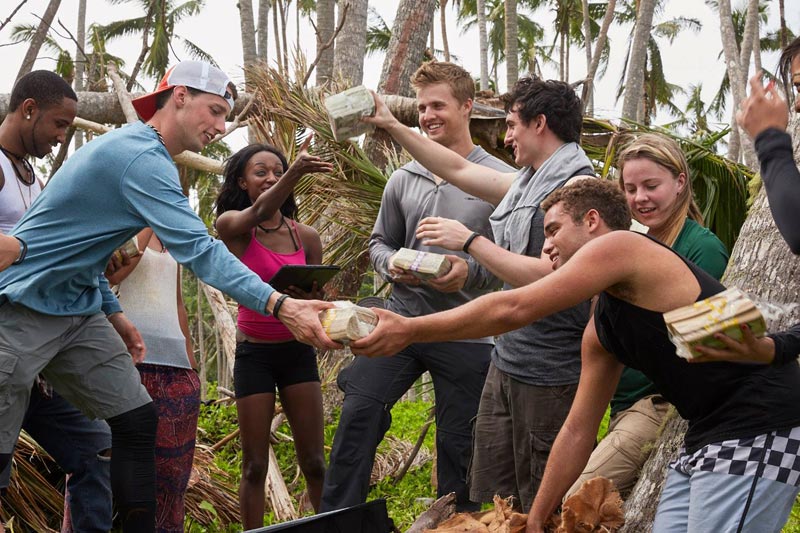 The cast of MTV’s Stranded with a Million Dollars in happier times. (Photo by MTV)

If you had surveyed the ten cast members that started at camp one, eight of them (including Gina and me) would have guessed she would be the first one to flare.

She was immensely tougher than any of us gave her credit for, and our opponents lack of respect for her in the game was one of their biggest miscalculations. Mr. Thrive (or “Trive” as he spelled it on his blue hat) tries to manipulate her into carrying the most cumbersome item as we prepare for a journey to camp eight.

One would think that after we followed through on our prize-money-sabotaging-escapade that they would understand we mean what we say. When they took the pot and we told them that they were then going to be responsible for carrying everything, we meant it. It seems as if Gina will have to take another stand to ensure they get that message.

Gina and I grabbed the machete after they stole the pot and because of their show of aggression, they were left carrying everything. I’d say we did not come out too poorly on that deal.

One aspect of surviving with Gina was she constantly talks about food. She loves a good meal whether it’s at a nice restaurant or fast food. I tried to not think about food when I was starving, but Gina had her first five to six meals already planned out once the game was over.

Shout out to In-N-Out; we’re big fans. And yes, you have to go animal style—but without the grilled onions.