Skip to Content
Cody, Alex and Makani, three of the final four on Stranded with a Million Dollars. (Photo by MTV)

Stranded with a Million Dollars contestant Alex Apple is writing about the show this season for reality blurred. If you have any questions for him, comment below or send them via this form.

In the first showdown of the final four on Stranded with a Million Dollars, the hour is filled with interesting storylines. Episode seven, “Lines in the Sand,” would have made a great two hour special given the several juicy elements.

The episode begins with another difficult journey toward camp seven. I cannot imagine everyone was not happy to get away from camp six where sickness, mud, and bugs were the only things around.

In the middle of the episode, Cody gets the best temptation, an overnight stay on a catamaran, and the tablet brings news of a challenge where we have a chance to win extra money ($45,000 is the end result).

Below I am going to focus more on the beginning of the episode—day one at the camp and group buy—as well as the end of the episode when my opponents finally make a bold move and try to starve Gina and me off the island.

And before any of you get in a fuss over the preview from episode eight, know that the money with us on the island was a prop. It is not real currency but merely represents our prize money at the end.

Before the first group buy, everyone is pondering the new dynamics: two versus two. Cody is thanking his lucky stars that Eilish and Alonzo got sick in the previous episode because otherwise he would never have had a chance to control anything in the game.

Cody and I chat by the water source shortly after arriving to camp seven. His proposal is push out Gina: make her carry everything, deprive her of food and get her to flare. My proposal is that I’ll consider that if you take me on your temptation. I was never going to turn my back on my last alliance in the game, but it was worth considering for a couple hours at least.

A question that I get frequently is why did I not change my alliance once I saw that other players were having fewer struggles. The answer is two-pronged.

On one hand, I will grant that Cody and I would have likely made a good team (we’ll never know for sure) and could have made it to the end with more money. Cody rubbed everyone but Chris the wrong way at camp one. 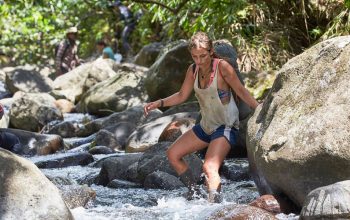 As Makani put it, he’s conceited and at times tough to be around. Look no further than his social media activity (according to an e-mail I got from someone in the know about the show, he loves to go live on Instagram live to make up fanciful Trump-style stories in his head).

Nevertheless, he was a strong player.

On the other hand, as the show got a couple weeks in, I thought it would have been in poor taste to totally turn my back on the people that had helped me get to that point. Like them or hate them, Eilish, Alonzo, and Gina are all good people in real life, and I had to ride with my core four once we got several camps in.

Was being in an alliance a perfect strategy? No. At times, we bought more food than I would have preferred. At times, we lacked a clear strategy moving forward, but the relationships I established with my alliance will endure long after the show is off the air.

Back to the group buy: Gina posits that she is not going to carry anything on the next journey unless she gets a jar of peanut butter. The idea never gains much traction, but she and I were not worried about food at that camp. The two of us found all of the cassava and taro root there was to be found.

Before the purchase opportunity, Gina and I chatted about her suggesting peanut butter to feel out how Cody and Makani would react even though we knew what their answer was going to be. They were just fired up to finally have some say in group buys, embodying what the golfer Jack Nicklaus once said, “I’d rather be lucky than good.”

The other question that comes up quite often from fans and people with a desire to be on any future seasons of the show is what my motivation was for going on Stranded.

I never looked at going on a reality show as an opportunity to strike it rich or become famous—or even be on television as that was something already a part of my day to day life.

I looked at going on Stranded as an opportunity for adventure and to learn things about myself. The most tangible benefit that I take away from the show is an appreciation for life’s blessings. It is cliche to hear parents or mentors remind you not to take something for granted. However, leaving behind your friends, family and civilization for 40 days teaches you that on a richer level.

The perspective I have on appreciating the good things in my life is something of which I hope I never lose sight.

The best gift you can give someone is your time.

The end of episode seven brings a chunk of excitement. Cody hatches a plan on the catamaran to take the pot and keep Gina and me from using it. His thought is that Gina and I will not be able to boil water and will have to flare or die of thirst.

As Makani says to Cody after he puts forth this strategy, we’re going to play hardball except “so much harder” than the alliance of four ever did when they had a majority alliance.

My alliance allowed them to purchase food at each group buy, and while we made their life difficult at times, we never followed through on our threats to try to starve them out. Cody and Makani are going to try to flip that and starve Gina and me out of the game.

The episode ends as this is going down, leaving a cliffhanger for episode eight, “No Money, Mo Problems.”

I slept better that night they stole the pot than just about any other night on the island because there was finally an in-your-face challenge to respond to. I’m naturally competitive, so their move—the boldest in the game, to date—fired me up and rejuvenated me mentally.

Taking a step back

What has made Stranded an interesting show is that it asked the ten of us to compete to survive 40 days without any voting off or similar mechanism to eliminate fellow contestants. From day one when Cody conceived his scorched-earth strategy, to the tent buy, all the way to day 40, the show has taken on a Hunger Games feel.

Most viewers took umbrage at the Eilish-Gina-Makani feud over carrying items on journeys. When I interceded and told Makani she should carry a backpack heavier than five pounds, viewers reacted with disbelief.

In my real life, would I force a woman to carry a heavy bag for me just because I did not want to? No, but this is a game. I knew Gina struggled on journeys, so I did not want her to get stuck carrying something that would lead to her flaring out.

Now, viewers will get to see Cody try to starve Gina and me out of the game or make us die of thirst. All of this make for a one-of-a-kind social experiment. Bring on the challenge!