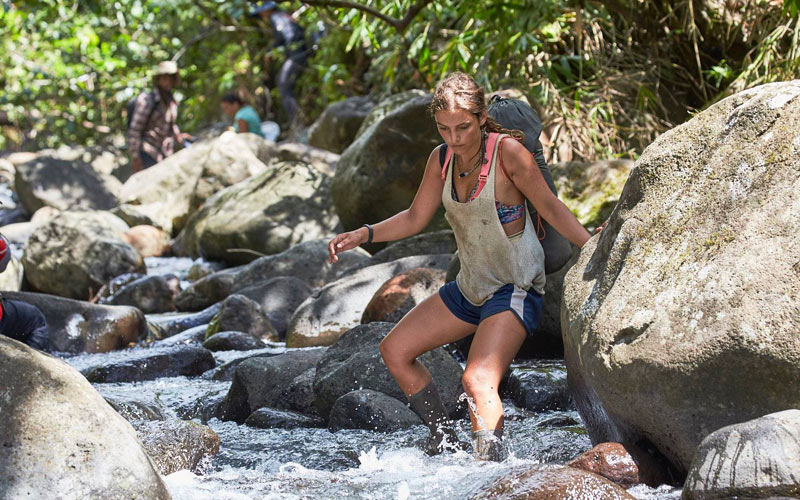 Makani Nalu on an early episode of Stranded with a Million Dollars. (Photo by MTV)

Makani Nalu is a cast member on MTV’s Stranded with a Million Dollars, and writes here about how she found her way to television, and how that experience affected her.

A year ago, I knew no one conceited enough to go by “Mr. Thrive.” I did not know the small-town Vermont reporter Alex Apple. Eilish was a working mom in the outskirts of New Mexico. I may have driven right by her on a cross-country roadtrip, but had no idea we’d be stuck on a deserted island together down the road.

Chris was doing construction in the state where I grew up, and going about general jock-activities. Ashley was cracking jokes, with a side of young and reckless in a small town in Kansas which I frequented on visits to my grandmother. Bria pursued modeling, Michael was blazing a trail of his own, and Alonzo was rapping about the hardships of life. Oh yeah, and Gina was partying.

Me? I was living in Venice, California. Making music, surfing, and working as a singer at nightclubs to pay the rent.

At one point in my life I left it all to live off the grid and learn from the land. I left a life in which every educational opportunity was handed to me for a life I could go out, earn, and make my own. I foregoed the easy path for a hard one. Some call it foolish, but I was just becoming Makani.

As I watch Stranded With a Million Dollars with the rest of the world, safely in the comforts of my small apartment I wired with cable just before the show debuted, I miss it.

I miss the island.

I’ve never had cable before. I’ve never had a TV! I was always too busy being outside and living life to worry about what was being broadcasted on the little cube in people’s homes. But all of a sudden, I’m the one on that cube. So I fidgeted with all the wires until an image of myself a year ago appeared—living life on a deserted island. And there I was, one year later, re-living a broadcasted past.

This whole reality TV thing is an oddity. I think back to my life before the show: wandering the world with plenty of heart and soul and lust for life, but sometimes doubting my direction.

When the show recruited me, and I said yes, it gave me a challenge, and a purpose. 40 days. Survive. With nothing, or the barest essentials. If you can, your life will be changed forever financially.

I’d been penny-pinching ever since I left school. However, I left school to learn exactly this primative skill set. And here was a shining opportunity to get paid for exactly what I had deemed more important than all the exams and textbooks. In my mind, I was being told: if you can prove that you dropped out for a reason, that you really learned something, and you can do this, you will be rewarded.

There was no option to fail. I’m strong-headed, and when I set my mind to something—goddammit, I do it. If I have to fast for 40 days, or not sleep for 40 nights. If I have to argue with $5,000 pizza-buying hooligans while I watch life-changing amounts of money go down the drain, I will do it.

I was once a girl backpacking with nothing but the next town on her mind. I was a girl enamored by the glow of Los Angeles, and the idea of impacting so many people and lives. I could never quite make those two people inside of me agree. There was one who wanted to get wrapped up and lost in the foreign cities of the world, and another who wanted to stand on the world stage and sing her song. Never mind a dusty street corner, there was a light to the city that drew me like a moth to the flame.

I battled these two sides of me for a long time, always seeming to conflict with each other.

When I got the call to do Stranded, for the first time, both sides of me quietly agreed. This was a rare opportunity to live closer to the land than I ever had, while simultaneously sharing myself and what I stand for with the world.

I left with the ultimate dose of gratitude.

But I met the Fijians who never would. Who will never fly out of those circumstances. The children who are malnourished. The villages that sway in every storm. The grown men that listened like small children as I told them about the city of Los Angeles and the skyscrapers.

One man begged me: Tell me more of the skyscrapers. I smiled, and looked at this man, his face deep with wrinkles from laughter and pain. This man had seen more than his fair share of hardship. But he knew a life that was simple and pure.

My face clouded somewhat as I took myself away from the jungled island we stood on, and re-imagined the buildings of LA. “You know, you’re not missing much,” I told him. “You’re not missing anything at all. This island-your home, this is beauty. This is the earth as earth intended to be. LA…let’s just say, it’s lost that. Paradise has been lost over there. But here, paradise is still found.”

Makani Nalu is a self-published author, musician, and backpacker who appears on MTV's latest reality survival show, Stranded with a Million Dollars. Her first novel, Drop-Out, can be found on Amazon.com under her pen name, Natalie Paul. A traveling piano entertainer, organic farmer, and life enthusiast, there are not many adventures or challenges Makani isn't willing to take on. Fans of Stranded are currently voting to see their favorite contestant appear on MTV's loved series, The Challenge. You can vote for Makani here, and follow her on Instagram or Twitter.