Skip to Content
Mike Myers being interviewed by on Late Night with Seth Meyers earlier this year. (Photo by Lloyd Bishop/NBC)

ABC announced today that its revival of The Gong Show has cast a host: Tommy Maitland. If the name doesn’t sound familiar, it’s because he’s not a real person, but instead is Mike Myers in appearance-altering makeup.

ABC announced this hilariously weird choice today, but the press release acts as if Maitland is real. Will Arnett, who’s producing the show, plays along, saying:

“I’ve been a huge fan of Tommy since I first saw his stand-up in the U.K. while traveling as a teenager. He was so funny and original. I had the good fortune to cross paths with Tommy a few years ago and ever since we’ve talked about working together.” 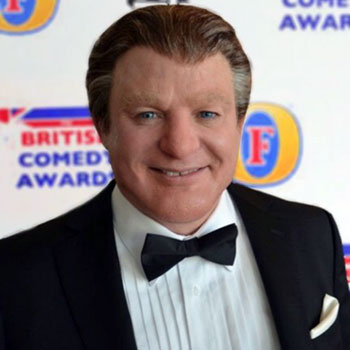 The network’s reality TV executive, Rob Mills, does the same:

“I have been a fan of Tommy Maitland for years, and I think he is one of the most iconic British comics out there, along the lines of Benny Hill and Ricky Gervais. I think this show is a great vehicle to introduce Tommy to an American audience, and those who are familiar with the original The Gong Show and its host Chuck Barris will be pleased with Tommy, who will bring the show into the 21st century with a bang!”

According to The Hollywood Reporter, “the comedian behind Wayne’s World and Austin Powers seems to be going full method for the gig,” though “no party involved will confirm it.”

In an in-character interview with THR, Myers sounded like a previous character of his, Austin Powers, saying, “I love to entertain, but I can be a bit of a cheeky monkey.” The character he’s playing, and who will take the role held by previous Gong Show host Chuck Barris, is 72 years old and from the U.K.

This is very weird, but also kind of perfect for a show that doesn’t take itself seriously at all—at least, the original version of The Gong Show did not.

ABC has been able to draw big talent for its nostalgic game show reboots, starting with Alec Baldwin, and so it’s not surprising they were able to land a (formerly) big star. It’s also a fascinating way for Myers to return to acting: He hasn’t done a regular television role since Saturday Night Live, and also hasn’t been on screen acting in a film since 2009.