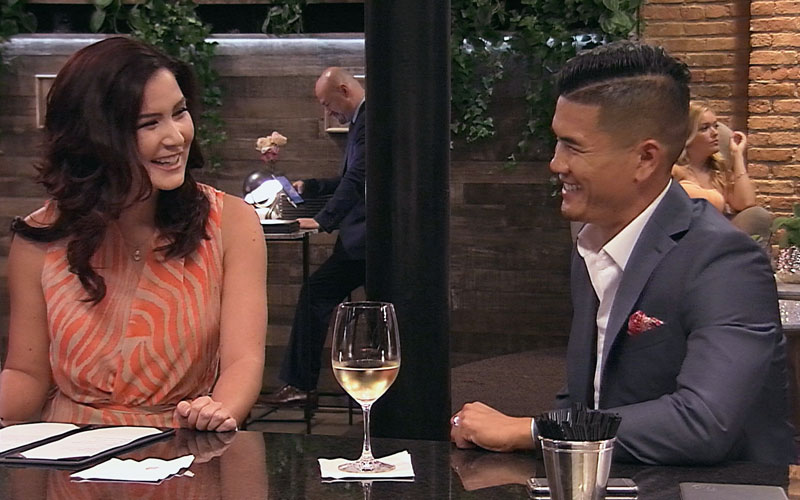 Rarely do the four broadcast networks give us reality shows that are not formatted competitions. Cable’s documentary-style series rarely feel like unfiltered looks into people’s lives, thanks to the heavy hands of producers and networks.

And rarely does reality television deliver such a charming, satisfying show as First Dates (NBC, Fridays at 8; watch season one online), a true fly-on-the-wall series that lets us watch single people pair up and have dinner together.

Of the three new broadcast shows that debuted two Fridays ago, First Dates has quickly become the first show I want to watch at the end of the week, even though it was the last of the three I watched initially. (As it turned out, Fox’s You The Jury is useless garbage; I’m still wrestling with ABC’s The Toy Box and how its overly coached child stars derail a potentially interesting competition.)

It’s a wonderful way to spend a Friday evening and end the week.

Get ready to be charmed

The premise of First Dates—which comes from a hit Channel 4 show of the same name—is simple: Two people, matched by producers, show up for a blind date dinner at a restaurant. All the dates take place at the same Chicago restaurant, though the participants are from all over the country. Drew Barrymore narrates, though I was barely aware of her narration; thankfully, it’s not heavy-handed, mostly just introduction and catch-up information.

The couples meet; they talk; they drink; they flirt; they eat; we watch. That’s it.

There are some cutaways to each person’s thoughts from after-the-date interviews, which are used sparingly. After the dates are done, the couples are reunited in the interview studio, and a producer asks if they’ll see each other again. The responses so far have included flat-out rejection, a drunk couple making out instead of answering, and the giddy laughter of a blossoming romance.

This show is adorably good-natured, and turns on the charm without being cloying. But it’s also not universally happy; sometimes the dates don’t work out.

Each episode intercuts between several dates, and they’re all different kinds of pairs. This is not The Bachelor; this is who single people in America are, which is to say they vary in age, race, sexual orientation, religious affiliation, geographic location, and background.

The couples seem paired in order to match, not clash, but while there has yet to be a hostile date, sometimes the pairs just don’t work. One of the more instructive parts of the show is how people with shared surface-level interests and experiences are sometimes complete opposites, and that’s apparent almost immediately. I’m also interested in watching how each person attempts connection—or pushes it away in an act of self-protection.

I find myself instantly rooting for some couples, and cringing at others. Some are painfully awkward; a few are painful. In episode two, a woman went on what she described as the “worst date of my life” with a man who appeared to have had far too much to drink and who still wanted to see her again, despite her obvious annoyance.

Most are a delight, though.

In the premiere, an older couple, who’d both lost their spouses and were each dating for the first time, connected instantly. Last week, two men, Andrew and Jason bonded over their similar coming out stories.

The show is filmed mostly with surveillance cameras, and the shots are sometimes not framed well or not as crisp as one would expect from a show in HD.

I suppose that adds to the intimacy, because these don’t feel like well-composed shots; instead, the cameras are eavesdropping, like we are.

The only thing I want from the series—besides additional episodes (there are eight in this first season)—is more detailed updates, especially for the happier couples. How are they doing now? Are they still together? Was this a one-time connection or did it lead somewhere?

There are updates at the end of the show, but the dates were filmed almost two years ago, in July 2015, and it isn’t clear how recent the updates are. Perhaps I’d be disappointed to see that immediate chemistry fizzled, because relationships are more complicated than initial sparks.

Still, after only watching a first date, First Dates has me fully invested many of these young relationships, far more invested than I get during an entire season of most dating and relationship shows.