Skip to Content
Alex Apple on Stranded with a Million Dollars. (Photo by MTV)

Stranded with a Million Dollars contestant Alex Apple wrote about each episode of the MTV reality competition for reality blurred. Read all of his recaps, Q&As, and thoughts.

The long-awaited finale of Stranded with a Million Dollars brought the most interesting temptation to date, more feckless attempts to poison water sources, and a final evacuation that was not for the faint of heart.

The show’s viewers now know that I lasted all 40 days on the island, as did my teammate Gina, despite a temptation that offered a chance an an early, but lucrative exit.

Below, I will address what camp life was like (how we looked for food, if we tried to steal back the pot) and why I chose not to take the temptation that would have paid me more money to leave the game early. I’ll end with overall reflections on the show.

As I addressed last week, Gina and I were battling severe hunger over the last two weeks of the game, but by carefully rationing food, we were able to get enough nourishment to keep going, pushing forth to day 40.

Based on the 44 minutes of aired footage, the viewer could easily believe that the four remaining cast members stuck within a five foot radius of their tents and fires, but much of my days were spent trying to harvest cassava, gather firewood, or find fruit.

Cassava is a rooted vegetable that grows all over the island, but the roots of each plant intertwine, making the edible roots difficult to find in the dirt below. I would take the machete and go digging, hoping to find extra food, and nearly every day I found at least some cassava which Gina and I roasted.

We were pretty sure that one of us would get the last temptation since our opponents received the one prior, and we anticipated that would provide us another chance at food. 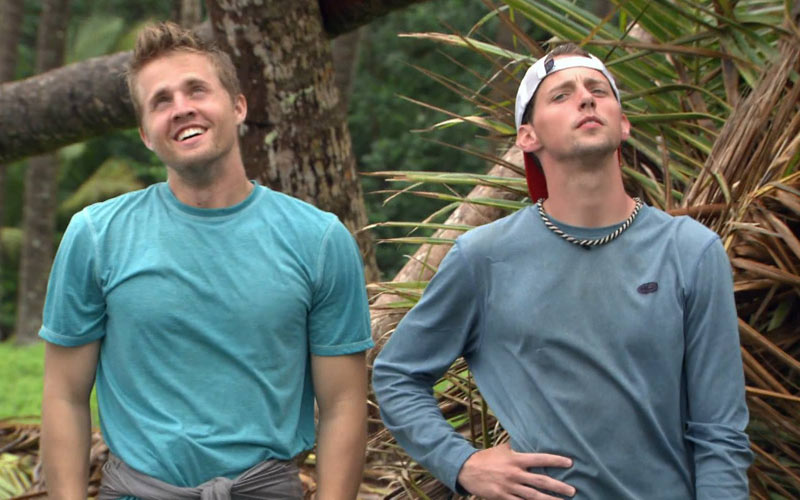 Rivals Cody and Alex on Stranded with a Million Dollars. (Photo by MTV)

Our hunch was correct. I was chosen for the last temptation and brought Gina, but upon walking up to it, it was clear it was something different given. The only things present were a tablet and pitcher of water.

The tablet said one of us could leave the island right then on day 38 and take $150,000 dollars with us. We knew our prize total at the time was $124,000, so we were offered an additional $25,000 that would have come out of the other three remaining players’ prize total.

Out of loyalty to one another and a desire to say we lasted all 40 days, neither Gina nor I took the temptation—which saved our opponents $8,333 each. It was the right thing to do, and I stand by that decision.

Upon returning to camp, Gina and I told our opponents about our decision. While we have been adversarial for several camps, we had saved them some money and wanted to see if they would let us borrow the pot as a gesture of good will. They declined as Cody believed we were not telling the truth about the temptation.

At that point, he decides to crap in all the water sources again. It went down like this:

Cody: Screw you. I’m going to crap in your water.

What doltish Cody failed to realize was that water sources come up through the sand at low tide. The fresh water is purified by the sand and great to drink. There are dozens of these ripples at every camp. Unless he pooped on the entire beach and in every coconut, he was wasting his time.

Gina and I got a good laugh out of his attempts to poison the water. As the Stranded twitter put it, I just didn’t give a damn.

His pooping in one water source was about as effective as pooping in one slide at the water park and expecting the whole thing to shut down. There are dozens of other options. Nice try.

Why not steal back the pot?

The pooping was such a minor move that had no bearing on the game. However, not having the pot made life very tough for Gina and me. Many folks have messaged me on Instagram or Facebook asking why we were not more aggressive in trying to steal back the pot.

Our opponents did a good job guarding it, essentially holding it or sitting next to it at all times. Also, there was a rule that after temptations or challenges, you could not interfere with another group’s items until they were back at camp.

We tried to recapture the pot but ended up just drinking from the abundance of aforementioned water sources and roasting (instead of boiling) our cassava.

Lastly, whether you loved or hated my strategy on Stranded, I really couldn’t care less. However, I’m thankful for the show’s viewers that made it successful, and I appreciate so many of you reading these recaps each week.

They represent my opinion—which you may or may not agree with—but I tried to inform viewers about how things worked behind the scenes and why some decisions were made on the show.

I’ll end with a thought I mentioned above: The best gift you can give someone is your time.