Skip to Content
Sandra Diaz-Twine, the Survivor queen for real, during Survivor Game Changers episode one, The Stakes Have Been Raised. (Photo by Robert Voets/CBS Entertainment)

What the first seven minutes of Survivor Game Changers lacked in drama, the next 113 made up for over and over again. The show exploded out of the gate—starting immediately after that preview cut off, when the tribes started gathering supplies, and Ozzy flew off the boat to go for a floating toolkit and Tai fell overboard with a huge chicken crate coming crashing down on top of him as he hit the water.

And that was before the real game play began, before the moment we’d all been waiting for came and finally, Hali explained to us her cobra strategy. Just kidding, I have no idea who Hali is or why her tribe kept her over Ciera. If they were concerned about strategic threats, they had two winners to choose from; if they were concerned about strength, they had Hali to vote off. The fact that Hali outlasted anyone is already a stain on this season.

But forget her: Let’s talk about Sandra. And, I suppose, Tony, though it really was Sandra’s night.

The two-hour premiere was two episodes in one, which made the time move by rapidly (sometimes 90-minute premieres with a single challenge can drag a little). And the second hour was the epic showdown between Tony and Sandra—who both incredibly survived the first Tribal Counci, against all logic.

Because Mana lost immunity twice, there wasn’t as much attention to Nuku, and I’m as shocked as anyone that I’m actually using Survivor tribe names, though I confess I had to look them up first.

Most of the time on Nuku’s beach focused on Cirie and Ozzy, with some Zeke fangasm, Tai chicken-love, and Debbie name-slaughtering (“Shirie”) thrown in. Cirie and Ozzy are still working through her vote against him eight years ago; Tai is still working on his poker face, immediately revealing to Cirie that Ozzy was concerned about Cirie’s vote (which actually wasn’t true—Ozzy in fact said “I can’t hold that against her” but instead expressed concern that she’s “not a physical player”).

As Cirie said, “the war’s gonna start anyway”; “there will be blood either way.” But their war was deferred. So was Caleb’s medevac, which I thought would happen when he slipped and fell onto rocks.

The first two hours were mostly about two people: Sandra Diaz-Twine and Tony Vlachos, who began the season in the most curious of ways. 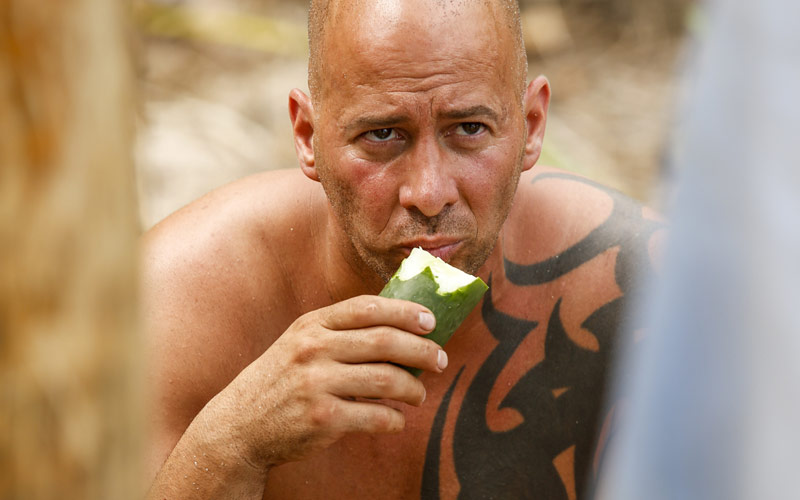 Tony’s erratic game play started immediately, and I just don’t remember him being that nutty that fast. His not-at-all-brilliant plan for this season: dig a hole literally right next to the well and cover himself in debris so he could eavesdrop in his Spy Hole.

Tony began his time on the show by, as Malcolm said, “freaking out everybody at camp”: Tony tore off into the jungle searching screaming, “I’m looking for the idol” and babbling about himself in the third person to the cameras: “When all these bums are talkin’, Tony’s always workin’.”

Yet their first visit to Tribal Council, Tony was not a target. The most drama came from Michaela learning she was the pawn, her name given to the actual target, Ciera. Michaela was also learning to try to control her responses to this kind of nonsense, and didn’t do a good enough job. After all, “You can’t contain greatness.”

Back up: that Tribal Council set! The lighthouse voting confessional, the camera shot through its window! To quote Ciera: “wow.”

Before the tribe made it to Tribal, Sandra started demonstrating that she’s going to play the same game, telling a group of people, “I’m gonna do what you all want.” It’s her incredibly effective anyone but me strategy. But the pressure of being a two-time winner, and Probst’s pestering, gave way to a new strategy: “I am the perfect person to go to the end with,” she said, claiming no one would vote for her a third time. And then she basically mocked the people who’d come back and tried to win two or three times and lost, and suggested she was their only hope: “If you’re going to do it, do it now and do it with Sandra.”

This is why I love Sandra so much: She’s funny and smart and ridiculous all at once, and has a way of being direct about her intentions but also, somehow, nonthreatening.

Sandra and Tony face off

Sandra also saw the need to stick with Tony and other obvious strategic threats, including Aubry, so the super-threats could protect each other. That fell apart when Tony caught Sandra and Troyzan talking in the woods at night, and the war was on:

Actually, Sandra had so many confident one-liners I thought she was toast for sure:

I especially thought Sandra was in trouble when Varner observed how rapidly Sandra assembled an alliance of five people to vote with her.

That came after their tribe lost again, though just barely. They were behind for most of the challenge, a multi-stage obstacle course that required dragging a 400-pound flaccid snake around. Malcolm almost caught up at the very end, making for a dramatic and thrilling end, though J.T. ultimately won it for Nuku.

And thus Mana returned to Tribal Council for a second time, and to produce wonderful television. You couldn’t script a moment like Sandra saying, “I don’t play like that. I’m calm” and then immediately freaking out because of a bug. “Is something in my damn hair?” she asked Varner. The bug appeared; Varner said, “ooh that’s huge”; Sandra and Michaela fled from their Tribal stumps.

Jeff Varner and Sandra are quite the comedic duo. “We are a round hole, and it’s time to get rid of our square peg,” he said, and Sandra delivered the punchline. After Tony said something, she explained: “Jeff, he hopes he’s not the square peg.”

Oddly, Sandra was the only one to not vote against Tony, but instead she voted with him, for Aubry, the pawn—perhaps an indication that Sandra didn’t truly control the vote. Or was she smartly avoiding a possible tie by giving Aubry two votes?

For now, Sandra totally deserves to gloat about Tony’s exit and her survival in the game, though I became super-nervous for her when, after Tony left and called the whole tribe “sheep being led to the slaughter,” Sandra said to him, “That’s what you get. Take your ass home. … The queen stays queen.”

She is the queen. And as Tony graciously admitted in his exit confessional, “She knows what she’s doing. I couldn’t pull it off.”

As Jeff Varner said—excuse me, Varner—”I’m in heaven. Having two winners going at each other is Christmas.” Yes it was. I hope Survivor Game Changers can keep delivering such gifts.

A few other highlights: