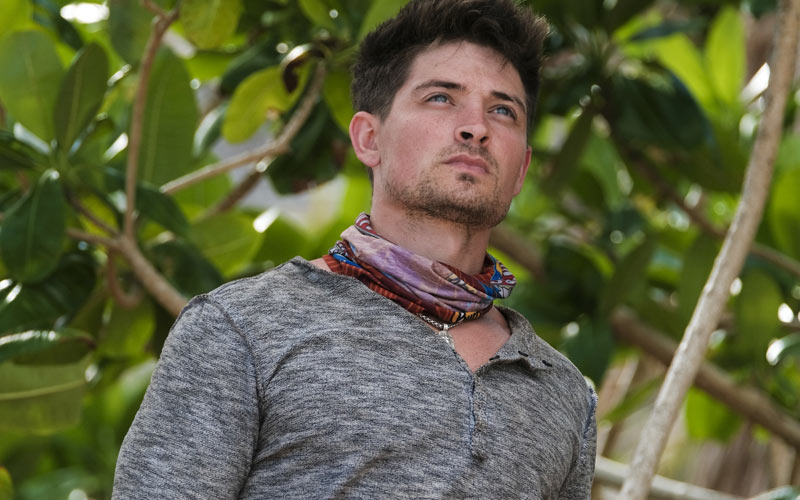 Caleb Reynolds, one of the odd players out after a tribe swap on Survivor Game Changers. (Photo by Timothy Kuratek/CBS Entertainment)

The tribe swap gods gave us Caleb and Tai again, and then they took Caleb away—on day nine, no less, the same day he exited the game last time, as he reminded us several times.

Tribe swaps have often delivered drama on Survivor, but honestly, this one didn’t, and as a result, it really annoyed me. An early swap, and one that switched from two tribes to three, were two unexpected moves, perhaps. But it felt like getting on the interstate to drive 18 hours and then immediately getting off at the next exit.

I was invested in what was happening last week and wanted to see how those tribes would manage, and now they’re gone.

When the tribes swapped, Jeff Probst put on his Captain Obvious hat and called out the odd people out were on each tribe (JT, Troyzan, and Hali/Caleb), and then handed out t-shirts to them with Target’s logo that said “vote me out” on the back. He was doing little more than narrating the obvious, of course, but it did illustrate a problem—as did Andrea, who said, “This is Survivor and it’s all a numbers game.”

The swap makes strategy easier than it was; it gives those in the majority a pass and screws the people who had bad luck in the draw. And that’s so less interesting to me than what happened last episode, and what was on track to keep happening.

But that’s what we had, it had a sad but predictable result—which made for some dry television, and a Tribal Council with no drama. The decision to get rid of either Caleb or Hali (who’s a similar challenge beast, especially in the water) was oddly uninteresting, and the tribe’s decision to get rid of Caleb—and Tai’s decision to go along with them—was logical and fine. Caleb was probably the biggest post-merge threat because of his strength and because of his relationship with Tai.

I will miss their friendship, and giggling at Tai’s lines (“I do want to play with Caleb”), though I do feel like their television friendship was just replying the exact same notes as it did one year ago.

Another post-swap odd person out, Troyzan, got a get-out-of-jail free card: a clue to an idol that was hidden at the challenge, though calling that idol “hidden” is like saying Probst’s challenge commentary is “subtle.”

The clue he received not only told him “your best oppotunity may just be after the challenge” and strongly suggested he “take advantage of this window,” but also gave him an actual drawing of the challenge layout and had an actual arrow pointing at the location of the idol.

This was not enough information for Troyzan, who said, “I’ll have to figure out where ‘right rear corner’ is.” Amazingly, he did find it, and managed to stick it in his crotch before anyone noticed. If J.T. doesn’t have the same luck, he’s probably been screwed by the tribe swap, too.

With the goat, Sandra wasn’t kidding around

Sandra, despite being a two-time winner, isn’t everyone’s favorite player. So it was great that she was able to do some image rehabilitation during tonight’s episode by trying to kill a mother goat and leave its baby to star in a Disney/Pixar movie.

When the tribe started chasing the goat, and all of a sudden it became clear that there was a tiny goat following it, I got so anxious. It’s not about eating the animal—as a vegetarian, I actually appreciate when omnivores are willing to deal with the reality of their food consumption—but about the fact that 1) they caught it because it was a mother moving slowly because it was trying to protect its kid, and 2) killing it would leave a tiny sad small baby goat wandering around bleating for its mother.

The fact that we were seeing this scene play out was evidence that they were not going to kill the goat—Can you imagine the well-deserved shit the show would get for that?—but it still was an awful few minutes.

But those few minutes were mostly spent on character development of Sandra as a villain. “That’s what they’re here for: human consumption,” she said just moments after Malcolm told the camera, “We won’t kill ’em, because we have a conscience.” (They just killed a chicken instead.)

When an episode relies on an almost-killing and some character-tarnishing as its most dramatic scene, and when the fate of a goat is more interesting than the fate of a player, there’s not a lot going on. It’s early, but a little too early to have such a meh episode.