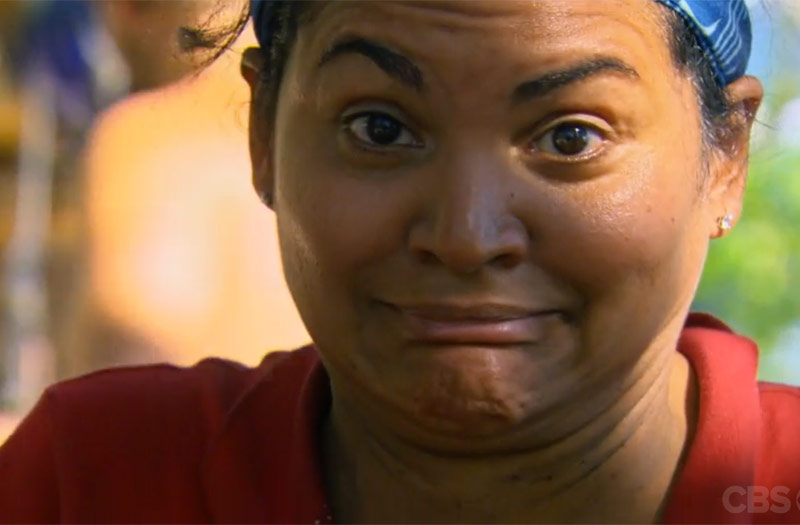 Sandra's look to camera was one of the highlights of Survivor Game Changers episode four, "Dirty Deed."

The fourth episode of Survivor Game Changers delivered some exceptional, brilliant moments inside a package that is at times feeling like a bizarro world version of Survivor. Yes, this was a wonderful episode in the way that a cake dropped on the floor is still delicious WHO ARE YOU TO JUDGE ME.

But more on Debbie later. Let’s start with Sandra.

I know her arrogance (“the queen is queen”) drives some people up the wall, but the arrogance is what’s working so well it’s unbelievable. Not only did she tell plan to pit J.T. and Michaela against each other by eating all the sugar, but she told Varner about it as she was doing it, made a Jim Halpert face to the camera in the middle of camp, and even confessed at Tribal Council.

She’s like an arsonist who pours gasoline all over a building, stands next to it, says, “I’m going to set this building on fire!”, lights a match and throws it into the building, and then fans the flames. And when the firefighters show up, she admits she did it and they’re so stunned they just let her walk away.

Sandra almost lost me with the goat, but her ability to play other people is exceptional. I keep thinking her path to inevitable victory is going to be thwarted, and then she surprises me yet again.

And while Sandra delivers on her arrogance, she is not alone in her hubris. At Tribal Council alone, we had:

J.T. may not have figured out what was happening at Tribal Council, and may have forgotten that he’s being filmed for a show that was going to air on television (insisting he’d take the secret of what he said to Culpepper to his grave), but he definitely nailed the big-picture view of this season: “Some of us aren’t game changers; some of us are just fillin’ space.”

Debbie is pissed, and I almost pissed myself

“It’s freaking nauseating and disagusting—AND I’M PISSED.” That was Debbie, lunging toward the camera during an interview and terrifying me.

The story tonight was mostly alternated between J.T./Michaela/Sandra and Debbie, who can now add reality show antagonist to her list of professions.

Let’s pause and understand that the players are under a lot of physical, mental, and emotional stress: They’re cut off from the world and the people they love; they’re in a stressful game; they’re hungry, tired, and miserable. I’m freaking out just writing those sentences, so I can’t imagine living that.

But Debbie went from zero to 60 different meltdowns. She literally said both “I don’t get pissed” and “I’M PISSED.”

The interview I mentioned above is also the one in which she insisted she doesn’t lash out at other people. Cut to Debbie lashing out. And she did that in odd ways, like turning and screaming at Brad, and then collapsing in laughter. Medic!

The editing did not have much sympathy. Instead, it made sure we knew that much of what Debbie said—that she was being ordered around (“Why don’t I just shut the fuck up and listen to what I’m told?”)—did not jibe with reality.

Her ranting continued at—and during—the immunity challenge. Curiously, though, no one challenged Debbie’s version—that it took Hali longer to complete the balance beam than she did. Were they just tired of arguing with her? Probably. Was the editing unfair in suggesting that Debbie lost the challenge for them? Perhaps.

I don’t want to have to pick a favorite between Brad and Debbie, but Brad acted more calmly than I would have to all of Debbie’s behavior. Her post-challenge freak-out was so random that Culpepper asked, “Is she acting?” In the middle of the challenge when Debbie demanded respect, Brad said, “I love you. I don’t know why you’re mad at me.”

No twists, so get ready for next week

Since the only thing this episode had to offer was 1) an exceptional strategic move by Sandra, and 2) characters behaving oddly, Probst and the producer machine are getting ready to fire some twists next week. (Oh, that reminds me: please vote in my poll.)

Next week’s episode will apparently make up for this episode’s lack of manipulation:

I don’t understand why this season has such a thing for “never-ending” twists, and #3 better not let some rando into the game. I have to think Survivor is better than that, but this season is making me worry sometimes.