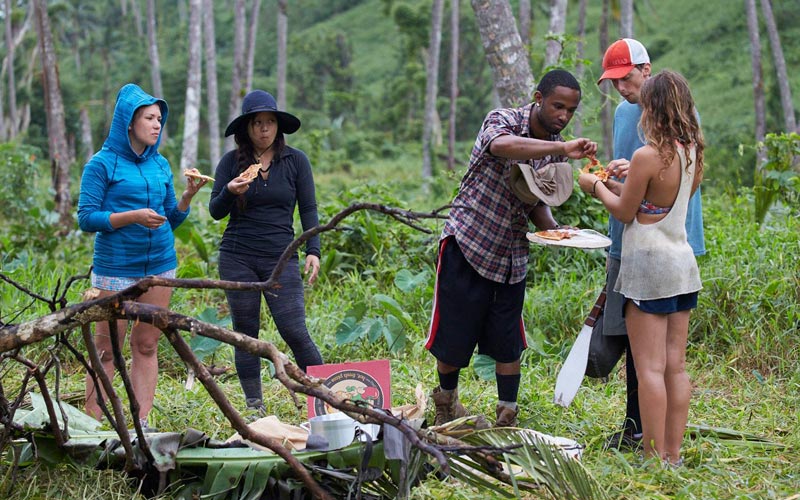 Stranded with a Million Dollars contestant Alex Apple is writing about the show this season for reality blurred—and answering your questions. To ask him about strategy, survival, or anything else, comment below or send questions via this form, and look for answers next week.

Well, after episode two of Stranded with a Million Dollars, it’s appropriate that I officially welcome you to the experience. The game has begun; civility has gone out the window.

Episode two, “Group Bye,” saw two cast members shoot their flare and evacuate after a brutal journey; a major disagreement over the purchasing of survival supplies; and one cast member failing to understand that we were there to play a game.

And then there were seven

Both Ashley Mercer and Michael Schuur shot their flares before the group arrived at camp two. Both feared that they would keep the rest of us from getting our $100,000 stash if we could not arrive at camp in time.

Compounding Michael’s problem is a common Fijian plant—what I called razor grass. Much of the grass on the island has a sharp, cutting edge that is remarkably uncomfortable to brush your leg on, much less walk on barefoot.

As soon as Michael shot his flare, I turned to Alonzo on the journey and celebrated that he, Eilish, Gina and I now had a voting majority and could control how money was spent at the group buy.

(Side note: Don’t know Alonzo’s story? It’s incredible. He in an army veteran who survived homelessness at one point with his family. Now, he’s putting together a music career in Buffalo. He’s the ultimate family-man and you’ll get a unique glimpse of that coming up this season.)

Much of the episode focused on the first day at camp two. The first night there, it rained continuously, and we had mediocre to below-average shelters to protect us. In the tropics, perpetual rain at night is a reality (it rained on 11 of the first 12 days). It comes out of nowhere, soaks everything, then comes back again. Remember when Survivor had to evacuate for the first time in 30 seasons? That was on Fiji, and yes, we were stuck out in that at this camp.

By this point, it had rained four out of the five days that we had been there. That night, Alonzo and I talked about how if we can secure a shelter advantage, we knew we could advance far into the game. Quite frankly, if other cast members were concerned with how the money was spent, then they should have realized having a strong social game was a necessity.

So Alonzo and I decided to suggest the tent the next morning.

Aside from the tent, we felt the need to purchase a pot, a flint, backpack and a machete. You are kidding yourself if you think you are going to survive 40 days without a consistent source of fire (flint), a pot to boil your water or food in, and a way to carry $1 million in cash that is divided up into 10s and 20s (backpack). Simply put, it was not realistic to go on without those items. We had not eaten in five days, and it sucked to spend $105,000 of our money. However, we were going to need these items, so we went ahead and bit the bullet.

Contrast Stranded with a Million Dollars with Survivor: they are given dozens of survival tools on the very first day of the show.

Alonzo, Gina, Eilish and I decided to vote for the tent because it gave us a decided advantage in the game. We would consistently have a solid shelter to protect us from the rain, the most demoralizing aspect of trying to survive in Fiji. A part of me wonders if the show’s producers ever expected us to consider a tent or if they thought we would deem it too expensive.

Makani lost her mind in the middle of the group buy and goes to cry at the water source because she was having a moment of realization that we were playing a game and not on the island to sing kumbaya, as Alonzo put it.

Because the show is only an hour, the edit advances before ever explaining thoroughly to viewers why Makani freaked out. She did not like the tenor of the game and failed to realize that not everyone was going to agree on every decision.

Quite frankly, this group buy was TV gold.

Five days in, I was the only one able to start a fire, the only one that had cooked a meal, the person with the voting majority to decide what to buy, and confident that I now had a solid shelter that could help me get to day 40.

Ultimately, that was all I cared about. I tried to make the decisions that were going to help me (or my alliance) get to the end.

By contrast, Cody and Chris were standing in a tree all night getting consistently soaked because they had no shelter. We let Cody use our fire to roast a frog at one point, but it turns out he almost fed himself and Chris a poisoned frog.

Ultimately, Chris’ poor shoe choice was bailed out by his getting a temptation. He was able to spend $15,000 for a whole new wardrobe. Contrary to their belief, they had very few successes thus far in the game. (I asked on Twitter: in the minority, who has less power: Democrats in Congress or Chris/Cody? That’s a tough debate.)

After Chris spends $15,000 on his temptation, every person in the game, except Makani, was responsible for spending part of the group’s money. Spending that money is the one thing that upsets most people on social media, but my question to them: if you felt like you needed to spend $30k, 40k, 50k to win hundreds of thousands of dollars, would you?

Answers to your questions about interviews and clothes

Each week, feel free to use this link to ask me any questions you might have about the show. I will get to as many as I can. I’ll start with two this week.

Mollie writes: I’m curious to know if producers just gave you all a tutorial for doing the selfie interviews before you started, or if there’s communication with producers beyond the iPad notes [i.e. they ask you questions to answer in your confessional].

Mollie, thanks for watching and writing in! To answer your question, it was a mix. During our day-to-day on the island, there was very little interaction with crew members, but they would let us know when we needed to put some time in talking to the selfie cam.

We were instructed before the show to be open with our feelings and thoughts. Without talking and explanation of what’s going on, it’s really hard to put a show together. Sometimes we would talk to the camera for five minutes, sometimes 30 minutes. It varied.

From my perspective, I wanted to explain to the camera why I was making the choices I was making.  That helps the viewer understand, so that was always what I tried to do in the selfie cam interviews.

Melissa writes: I’d love to know the level of preparation you were given beforehand or survival training. For example, you was smart enough to wear some sort of leggings but it looks like all the women wore yoga pants and tank tops.

Melissa, great question. When I was told that I had been cast on the show, I was also told that I was leaving very soon, so the preparation time was minimal. There was a survival expert on crew that was watching us a majority of the time, but he was there primarily to make sure we did not kill ourselves by eating or doing something we were not supposed to.

As for the clothes, I knew before the show that I would be in a survival scenario (but didn’t know the rules of the show) and that I would be in the same clothes for as long as I was there. I just tried to pick the best clothes possible, and I gave it a ton of thought. Leggings and a hat for extra protection, Chaco shoes—shoutout!

Your clothing could make or break your game. Chris wore big heavy Jordan shoes. Horrible decision. As executive producer Kevin Lee said in a recent interview about our clothes: “A lot of them were smart. And a lot of them were dumb. The Eagle Scout literally showed up in leather Topsiders and no socks. How dumb could that be?”

Kevin Lee and Tollbooth have pulled off one of the most unique television shows ever.