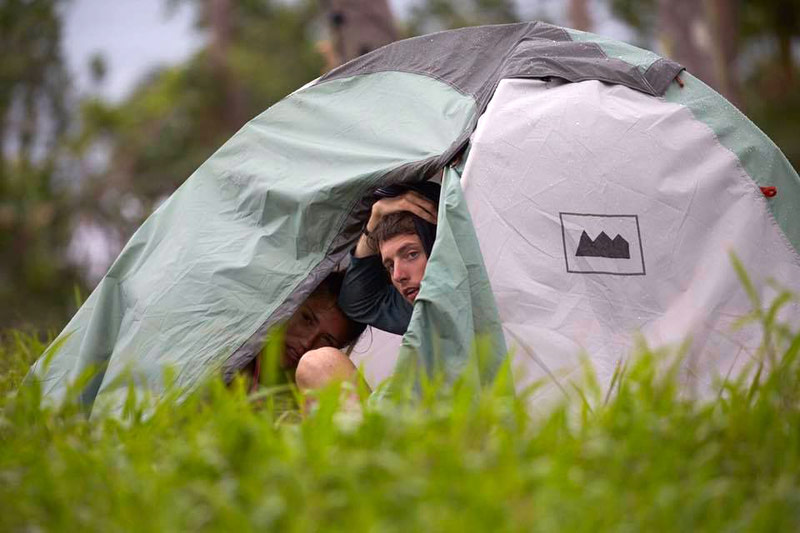 Alex Apple in the infamous Stranded with a Million Dollars tent. (Photo by MTV)

Stranded with a Million Dollars contestant Alex Apple is writing about the show this season for reality blurred—and answering your questions. To ask him about strategy, survival, or anything else, comment below or send questions via this form, and look for answers next week.

Stranded with a Million Dollars is an interesting show in that it asks the audience to consider the choices that cast members have to make. Do you spend money to survive? Do you rough it only to end up not completing 40 days stranded? Where does fairness come into play?

As a cast member who is now rewatching what played out and seeing the audience react in real time, my suspicions are confirmed that what people think is the best strategy runs the gamut from barbarian to total fairness.

In episode four—one in which a second tent is bought, Cody and Makani win a challenge and further divisions evolve at the camp—several key decisions are made, but they are left almost entirely unexplained in what aired.

Why go on Stranded

When I signed up to go on a “survival show,” I had no idea what it was called, how to play it, or if there was any potential to win any prize.

For that reason, I did not go on the show to strike it rich but rather to try out a new adventure. I looked at the opportunity as one that was rare and something that may never come along for me again. While the money is a nice motivator on the island, that’s not what it was about for me.

My hope was that I would be challenged in a way that I had not been challenged before and in the process, that I would learn a great deal about myself. The most tangible benefit to my time on the island is that I learned to appreciate my blessings—the gifts God put in my life.

Sure, it’s cliche to hear someone say “don’t take that for granted,” but I gained a deeper understanding during my time on the island of what that really means.

For that, I’m grateful.

Because this is a new show, there was no precedent for how to play. No one has come before and played in a way that was worth emulating. All of us devised our own strategy at the first camp.

My strategy was simple: I wanted to make decisions that were going to help me make it to day 40.

I knew that making it 40 days was going to be challenging enough, so I didn’t pay too much attention to trying to ween out others. I needed to get myself to day 40 first. Take the first tent buy, for example. My motivation for wanting to buy one was to secure a shelter that was going to alleviate the concerns I had about the incessant rain that falls on the island. Despite how some viewers may feel, that often-pilloried purchase was not motivated by a desire to stick it to someone else.

I aligned myself with three people who showed loyalty to me, so I showed loyalty back to them. When initially deciding who to align with, I chose Alonzo because I knew that I could trust him. He is an army veteran who spent a period of time homeless and living out of his car so that his mother and sister could stay at a women’s shelter. They’ve risen, picked themselves up and continue to be a tight-knit family. I knew he was someone I could probably trust.

I chose Eilish because she was a mother who I could tell was tough and tested. Plus, she had good survival skills. Gina fell into our alliance a few days in; her humor and colorful commentary quickly endeared her to the group. I was as shocked as anyone that she had not flared out at camp one.

With an alliance, we merely tried to play in a way that could get us a little farther into the game. You have to take it a day at a time, and sometimes we knew we would have to spend money—$10k, 20k, 30k in order to keep our shot at winning alive.

The decisions were not easy. We bought more than I would have liked at times, but that was the consequence of having four people in an alliance with four needs to cater to.

Other people spent as well on temptations, duffel bags etc, so I do wish the reasoning behind buying decisions more well-explained because viewers are left without an understanding of some factors at play.

What’s also not shown is the actual surviving and scavenging for food and water that’s going on. My best skill was starting a fire, and for weeks, I was really the only one that could get one started in any kind of quick order. However, the show has taken more of a singular focus on shelter than on surviving.

In episode four, I give credit to Makani. She made a power move forcing a decision on the tent, and her strategy worked out well.

Reader questions about the tent and food

Do you still consider your team the “heroes” while you’re stealing food like chicken shit cowards?…I’m just curious because I don’t remember seeing Superman steal food from people while their backs are turned…..

In the context of that last night’s edit, that comment seems pretty silly. The most difficult part of surviving forty days is staying mentally strong, and funny, non-serious moments help with that.

I offered that heroes vs villains comment as a lighthearted analogy at one of those times. A key for me was not taking myself too seriously, so a joke, even a self-deprecating one, was necessary at times.

Each alliance has now stolen food from the other, and the game was not always fair (we were competing against one another, after all). If we’d all played fair 100% of the time, Stranded with a Million Dollars would have been a boring 10 episodes.

But if we had wanted to play really unfair…we probably would not have agreed to buy our competitors a tent and 48 ounces of protein in the form of peanut butter.

Did you have the option of buying more than one of the same item? Specifically, could you have bought more than 1 tent? That may have solved a lot of the conflict.

I guess you got the answer to this question last night, but there was no buying limit on items. If someone had wanted a Big Mac from McDonalds, they could have bought it for a price—but that would have been pretty gross by the time it arrived.

Since the cost of the tent came out of everyone’s prize money, why didn’t everyone get to use it (even if they voted against it)?

Great question. Here’s why that worked out the way it did: Cody threatened virtually everyone in the first camp and said he was never going to buy anything, so others would go home and he would be the only one left standing in the end. Therefore, we knew that we needed to secure some supplies while we had the chance.

If Cody and co. asked for a second tent at the time, we would not have had much ground to stand on to deny them that. Instead, they said they’d rough it, but their tune changed on that several days later.

At the second group buy, everyone could have secured supplies they needed to survive. However, the others decided they did not want to purchase anything at that time.

I told Cody when we were leaving camp two that we did not approach him with the idea before hand because we knew he would not like it, and we wanted to minimize conflict at the time. That backfired big time and went exactly opposite of the way we had hoped. Unfortunately, that set a tone for the rest of the season.

To be honest, Alonzo and Eilish were more adamant than I was that no one else should get in the tent. For better or worse, I’m a pretty trusting guy, but we made decisions as an alliance, not individually.

There’s an old 17th century prayer that I recite to myself on occasion. It says:

“I dare not ask for improved memory, but for a growing humility and a lessening cocksureness when my memory seems to clash with the memories of others. Teach me the glorious lesson that occasionally I may be mistaken.”

That last part is key—teach me the lesson that occasionally I may be mistaken. I’m happy to admit that about myself; not my strategy (nor anyone else’s) was perfect, but I just tried to do what I could to get myself to day 40.