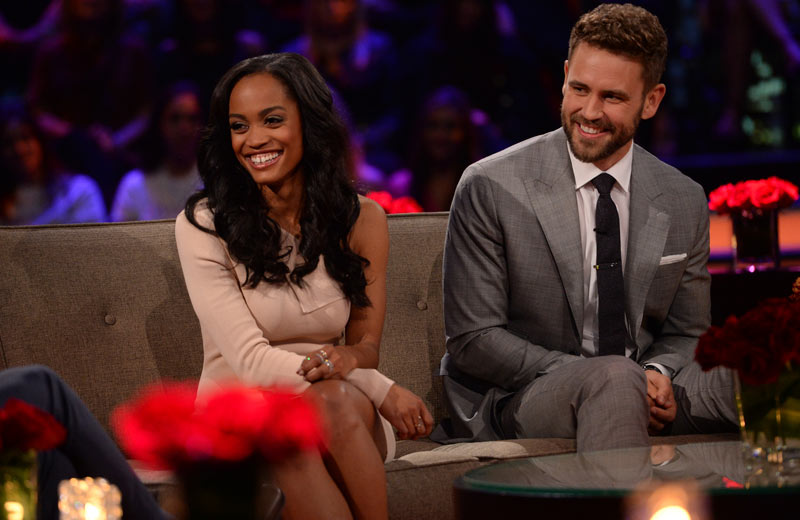 The next Bachelorette, Rachel Lindsay, and the current Bachelor, Nick Viall, on "The Women Tell All." (Photo by Michael Yada/ABC)

It’s a big week in reality television, which has Survivor‘s 500th episode on Wednesday surrounded by a mix of new and returning shows, including Marcus Lemonis’ The Partner and Chopped Junior.

Here are the 11 shows that debut this week—preceded by the nine that debuted last night, for a total of 20 premieres this week. (I’m very proud of my math abilities.) Highlights follow, along with a list of specials.

Among younger viewers ages 18 to 49, the top reality show on cable television last year was Love and Hip Hop: Atlanta, which returns for its sixth season tonight (VH1, Mondays at 8).

VH1 notes that “several new additions and returning series vets” this season, and previews the cast and its drama in this super trailer:

The Bachelor airs its annual “The Women Tell All” episode tonight, and it’s two hours long, following a normal one-hour episode—or as normal as the fantasy suite overnight slumber party dates can be.  (ABC, March 5, 8 to 11 p.m.)

Next Monday is the season finale: two hours of dragging its feet until the “winner” is revealed, and then an hour of After the Final Rose reunion, starring America’s most disingenuous host, Chris Harrison.

Marcus Lemonis: don’t give a shit what people think

More than a year after it was announced, The Partner, a spin-off of The Profit, will finally debut (CNBC, Tuesdays at 10).

There are only five episodes and 10 candidates who are being considered for a job with Marcus, who will not be pretending to hire someone: the person he chooses will get a $500,000 contract and equity in the businesses featured on the show.

The inevitable comparisons to The Apprentice apparently led Marcus Lemonis to post, over five separate tweets, his reaction to reaction about the spin-off:

(1) I’m hearing noise around #thepartner being like other Tv shows. I believe in doing what makes you happy and finding what you need…

..(2) I will and always will do what I think is best for my team..job creation and thoughts around it are my motivation…

(3)to teach people about themselves and for me to learn about myself.. get butt off the couch and be better.. I believe in you

(4) btw.. i like noise and doubters.. it’s my fuel..and should be yours also..#theprofit and #thepartner are to inspire you to be better…

(5)have fun, be productive, enjoy life, accomplish something, inspire people, prove to yourself, & don’t give a (S) about what people think