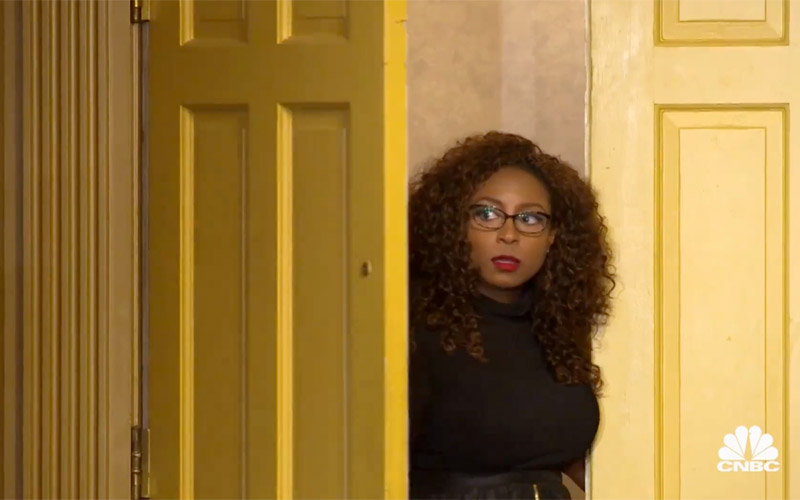 Buffie discovers the big twist in The Partner's episode one.

In its first episode, Marcus Lemonis’ new CNBC series The Partner definitely reminded me of another reality show—but it was not The Apprentice, the show that this competition was immediately compared to when it was first announced last January.

No, it was The Profit—early The Profit, when the show felt raw, definitely low-budget, and not quite fully formed, and as a result felt a lot more real than other shows in genre. Although The Partner’s entire premiere episode took place in Chicago’s Drake hotel, it felt low-rent, from the lighting visible in the background to the awkward conference room set-up.

The interaction that took place there was serious, yes—there is a $500,000 job and equity on the line—but it was disarmingly casual, thanks to Marcus’ celebrity, which is at least in part thanks to The Profit. The 10 contestants weren’t just job candidates; many of them were fans.

Marcus walked in and the group “bum-rushed him,” surrounding him in a group hug. Later, Michael took a handshake and turned into a hug, which turned into picking Marcus up off the ground. What.

Those awkward moments provided most of the entertainment.

The Partner’s first hour was, to be honest, a little on the boring side of the spectrum—it didn’t throw them into a crazy challenge, it didn’t even leave the hotel. But I think that’s an asset, proof that this show is different. Marcus is serious about hiring some and doing an Apprentice-style task right away seems counterintuitive, though it also seems those challenges are coming.

Asking them to deliver their pitch in front of a room full of people (extras, actually), was a nice twist/challenge, and while it didn’t create crazy drama, it produced the episode’s best moment: Buffie opening the door, seeing all of the people, and then closing the door again, like she’d arrived at the wrong room.

The cast may be impressive on paper, sure, but I was also surprised that out of 20,000 people, these were the top 10. Many of them didn’t present well—either in their two and a half minutes, where they crumbled under pressure, or in conversation with Marcus. Or at all.

Yahoo Answers gives better responses than these candidates. Some examples:

After the conference room pitches, Marcus told the extras that the 10 candidates were “all good,” and then he told the candidates, “Every single one of you, in my mind, would add value to my organization in one way or another.”

The episode did not make that case at all.

Buffie—who appears to be the only one who visited Marcus’ businesses in Chicago—and Peilin and seem like the only viable candidates, people who have experience, intelligence, and personality. Also going through to the next round are Chuck, who’s kinda series; Julie, who’s not as confident; and Erin, the cocky guy.

Although I was surprised that the 10 candidates were cut in half, I suppose that makes sense to have five people for the remaining four episodes, meaning one can be eliminated each week, if the show will do weekly eliminations, which it may not. Also, I couldn’t see any of the eliminated people having any chance at all.

The Partner, though, has potential as a real-life job interview that happens to also be on television. I’m eager to see where it goes. It may not be The Apprentice—the closest thing to NBC’s competition was Marcus’ exit line (“you will not be the partner”) being dubbed in later—but it’s also not quite sure what it is yet.