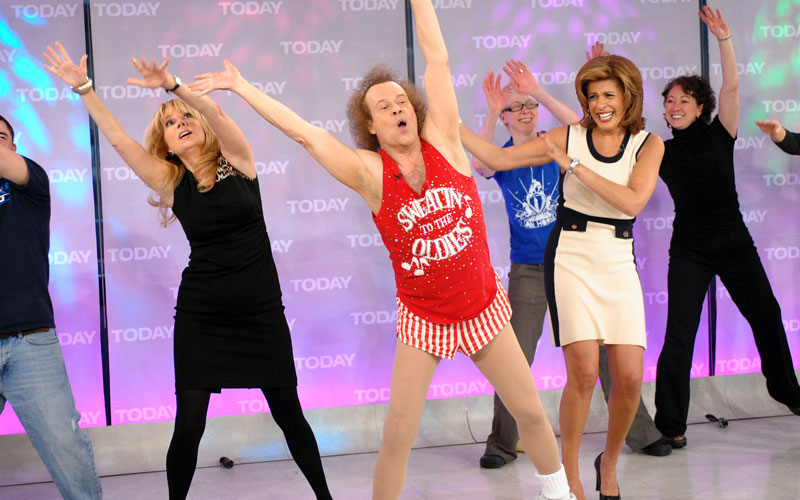 Richard Simmons, center, exercises with Kathie Lee Gifford, left, and Hoda Kotb, right, on The Today Show in 2010, before he disappeared from public life. (Photo by Peter Kramer/NBC)

“Saying nothing is worse than saying, I can’t be your friend in this way that you need, as much as you need,” Steve Almond said on a recent episode of Dear Sugar Radio, the podcast on which he and Cheryl Strayed, the author of Wild, give life advice.

They were discussing ghosting, how friends or lovers sometimes just disappear, and Almond added, “There are consequences to our actions, even when our actions are inaction.”

Richard Simmons’ decision to leave the public eye—and there’s enough evidence now that it seems clear that it was his choice—left a lot of people baffled, especially since he did so suddenly, without warning, and then cut off communication. One of the consequences of his inaction, his failure to even respond to people or tell them that he was okay, is this podcast.

The show started as an instantly compelling mystery: Where is Richard Simmons? Why did he disappear? There was curious evidence (Richard’s social media reused old videos, posting them as if they were new) and insane conspiracy theories (that Richard’s housekeeper was holding him hostage, and doing so using witch magic).

At the center was a compelling narrator: Dan Taberski, who’d befriended Richard, like so many others did, after taking Richard’s workout class. He explored leads and took unnecessary trips, most of which produced compelling audio, like his knock on Richard Simmons’ brother’s door.

By the finale, though, Taberski and the show seemed to slowly back out of the room, away from the fray he’d created, and away from the controversy and accusations that his project was exploiting Simmons.

That brought the podcast to more interesting conclusion, though. Taberski’s arc took him from concerned friend to investigative reporter, but it ended with him sitting in a room, alone, dealing not just with Richard’s decision, but with the consequences of his own actions.

The result was an episode and series that was not a neat, clean story, but one that was amorphous, entertaining and frequently troubling. The series’ great achievement was being kind of a wreck and then presenting that messiness for our consideration.

The problems and successes of Missing Richard Simmons

There were some real problems with the show, despite its engaging storytelling.

That two-second video of the beach that becomes such a pivotal part of the finale? It was posted Feb. 25, three days after episode two aired.

The welfare check that’s also a pivotal part, and is framed as brand-new information? People magazine reported about that on March 9, and TMZ said that occurred two weeks earlier—around Feb. 23, again, right after the series started.

If those were true discoveries, they should have affected the direction of the whole podcast, since it was concerned with what happened to Richard and with his well-being. Instead, it marched on and saved those for later. (As is common in reality TV and documentary film, events get rearranged to create a more compelling narrative.)

The finale did change, though we don’t know how; Taberski only hinted at a return visit to Richard’s house, which perhaps seemed too far over the line with critics watching so closely.

Like The Jinx and other works of real-life storytelling before it, Missing Richard Simmons left its audience with questions. Also like The Jinx, in the wake of criticism, its creator has stopped doing interviews with journalists—a rather ironic move considering the subject matter of the podcast.

Dan Taberski was a charming narrator and guide, but also one who often got lost in justifying and rejustifying, and making claims and attempting to undo them in the same winking sentences.

Here’s Taberski after suggesting Simmons sounded like someone being held hostage with a gun to his head: “I’m not saying that’s what’s happening. I’m just saying.” As the New York Times pointed out, Taberski ended a segment on Richard’s gender identity by saying, “But if he is transitioning? Mazel tov. But he’s not. I don’t think?”

Those are annoying and unfortunate attempts to let listeners ignore the evidence and cling to whatever theory they want.

What’s even more unfortunate, though, is that even those egregious sentences could theoretically demonstrate an aspect of good journalism: You ask questions and try to answer them, and then challenge the answers to make sure they’re accurate. Life doesn’t sort itself out after asking one question to one person, so you keep exploring.

Taberski, however, repeatedly undermined his own journalistic efforts, in part with the show’s tone, which went back and forth from Serial to cereal commercial.

Perhaps the biggest disconnect was the podcast’s deep reverence and respect for Richard Simmons and its disregard of Richard Simmons as a human being. Taberski frequently acknowledged the possibilities that Simmons was sick, physically or mentally, or otherwise dealing with something private that Simmons didn’t want to be public.

There’s a reason why Society for Professional Journalists’ Code of Ethics devotes one of its four categories to “[treating] sources, subjects, colleagues and members of the public as human beings deserving of respect,” and that’s because reporting has the potential to cause harm.

That category, by the way, is titled “Minimize Harm,” because it’s not always possible to Avoid Harm. Sometimes a story that needs to be told also has consequences for its subjects.

But is this a story that needed to be told? What did Richard Simmons owe his fans and friends?

The finale included audio from last November’s closing of Slimmons, the studio where Taberski met Simmons. In tht segment, Taberski said six words that I think illustrate its major blind spot—and the true story here, the real conflict, the thing that Missing Richard Simmons ultimately was about.

“The whole place was up for grabs—pictures from the wall, mugs, I got a three-pound dumbell,” Taberski says. “Everyone was grabbing a little bit of history. Not just Richard’s, but their own.”

Taberski doesn’t say if this “looting,” as he initially describes it, was actual theft or encouraged by the people who were left to manage the space in Richard’s absence. Either way, though, that last sentence conflates past experiences with ownership of property. It suggests that because someone experienced something, they now own part of it, and that’s the way many people feel about celebrities and reality TV stars. I watched you, and now you owe me something.

Richard was, of course, different in that he engaged with so many of his fans on such a deep and emotional level. That does not change the fundamental nature of the celebrity/fan relationship, though, and it seems likely now that some people mistook Richard’s concern for actual friendship.

Taberski finally seems to realize that in the final episode as he parses his own complicated feelings. And they are wonderfully complicated, as is real life.

In the end, Missing Richard Simmons pivots from Taberski trying to find out what happened to Richard to justifying his “grand gesture”—creating the podcast.

But the episodes we’ve listened to do not seem like a gift. The way Taberski and his producer, Henry Molofsky, included compelling stories and testimonials from Richard’s clients and friends next to ludicrous theories is like cooking someone a beautiful plate of food, adding several scoops of dog shit, and then insisting it was a labor of love.

What’s great, though, is that all of this messiness is in the podcast. That includes criticism of it: During the final episode, Taberski interviews Richard Simmons’ manager, Michael Catalano, who basically says that Richard has heard parts of the podcast and it has caused Richard pain while creating a frenzy among us, the listening public.

At the actual end of Missing Richard Simmons, Taberski says, “Endings are hard. Just ask Richard Simmons.” But its real lesson seems to be that if you ask and don’t get an answer, you’ll have to figure it out on your own.