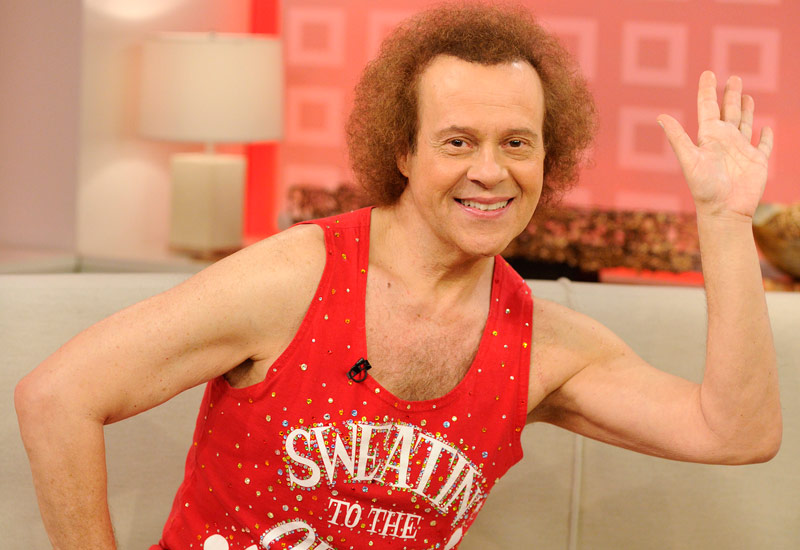 Richard Simmons on The Today Show in 2010, before he disappeared. (Photo by Peter Kramer/NBC)

This month, more than 35 podcast producers are sharing recommendations for podcasts as part of the “trypod” (try podcasts) campaign, while podcast listeners are using that hashtag to recommend their favorite audio shows.

It’s an excellent opportunity for me to introduce an expansion of my coverage into the world of unscripted entertainment. Okay, you might be thinking, Isn’t there enough reality TV to be covering? Aren’t there shows you could cover instead of podcasts?

Absolutely. But here’s the thing: Over the past few years, I’ve increasingly found myself more excited, more psyched to listen to a new episode of a reality-based podcast than I have been to watch any reality TV shows. It’s the feeling I used to have waiting for new episodes of The Real World. Podcasts also feel like they’re in the early days of discovering their potential (and their audience, as only about 20 percent of Americans currently listen to podcasts, according to Adweek).

While reality television flounders, crippled by fear, all kinds of great reality-based entertainment is being produced, and it’s entertainment I’m enjoying so much I want to share it with you. Most recently, I’ve been absolutely all in on a show called Missing Richard Simmons, which is my first recommendation below. I cannot wait for the next episode each week.

How to listen to podcasts

If you’re new to podcasts, just think of them like audio versions of television shows, or an audio version of Netflix. Most podcasts release new episodes weekly. You can subscribe to shows just like you record a series on your DVR, and new episodes will show up when they’re released, and then you can listen whenever you have time. And it doesn’t matter whether the show is currently producing new episodes or aired years ago.

To subscribe and listen, though, you’ll need an app. I have a few suggestions:

On to the recommendations!

There’s a reason that the number-one podcast on iTunes right now is Missing Richard Simmons: it’s exceptional storytelling about a well-known subject.

Richard Simmons, as you may have read, hasn’t been seen in public in years; he disappeared, no longer teaching his weekly exercise classes in Los Angeles and cutting off all contact, even from his closest friends.

One of the friends to whom Richard stopped responding is Dan Taberski, the host of Missing Richard Simmons. Taberski is using the podcast to explore what happened to Richard—and to examine larger questions, such as what a celebrity owes his or her fans, if anything.

Part of why the show works so well is that Dan is telling a story about someone he knew intimately—Dan and his husband even had dinner at Richard’s home, and spent time with Richard and Richard’s former friend Mauro Oliveira, who wrote this crazy book and who literally thinks Richard is now under the spell of a witch.

Taberski presents information and evidence—including Mauro’s claims—in a way that keeps me constantly shifting back and forth. One minute I’m totally compelled by a piece of evidence or a person who’s talking, and then next I’m totally dismissive. Sometimes I feel sympathetic to Richard and think everyone, including Taberski, should just leave him alone; the next minute I’m desperate for a lead Taberski is following to reveal something, anything.

I’m not sure what kind of ending the show will have, but that’s a big part of why I’m listening: I have no idea where this is going. Whether it finds a definitive answer or leaves us with no clarity at all, I’m all in for the ride.

In the Dark is about the 1989 kidnapping and disappearance of 11-year-old Jacob Wetterling in Minnesota.

What’s truly incredible about the podcast, however, is that the story starts with its conclusion: Early last fall, after almost 27 years, Jacob’s murderer confessed and led authorities to his body.

Madeleine Baran and the team at APM Reports had been reporting the story for a year or so, but they adapted and incorporated that news into the very first episode. It was a smart choice and one that worked very well.

Even though the murder is solved, there’s a bigger mystery at play throughout the season: Why cops couldn’t solve the case for 27 years. The questions extend beyond what happened to Jacob and into what happened with those investigating Jacob’s disappearance—and those who were affected by the investigation, including a falsely accused man.

In the Dark is gripping storytelling, and a satisfying first season.

While true crime is a popular podcast genre, just as it’s a popular reality TV genre, not all real-life stories are about murder or illegal activities.

Making Oprah explores how Oprah Winfrey, news anchor, became Oprah, queen of all media. That includes fascinating questions like how she was able to connect through a television camera to so many people.

Like all great podcasts, it also includes a personal component, and that’s host Jenn White. In one of the show’s best moments, we hear Jenn land an interview with now-elusive Oprah herself.

My only criticism of the series is that Making Oprah doesn’t seem to be too curious or critical about how Oprah changed over time as she became more successful and more wealthy. Hearing her in those early shows, she’s so open and vulnerable, and in interview for this podcast, she’s now drenched in ego yet convinced she’s not.

But even without that, Making Oprah is still a great story—and a short one, with only three full episodes. There are three equally strong bonus episodes, however, including the full interview with Phil Donahue, which is a must-listen by itself.

Serial is basically podcasting’s Survivor. It wasn’t the first podcast, but it was the first to get mass attention, and told the world that this was a viable new medium. Serial inspired copycats and innovation, and still stands as one of the best in the genre.

Though it is several years old now, I regularly mention the show to people who’ve never heard of it. Like Making a Murderer after it, the show had real-world impact. It’s a re-investigation of a high school student’s murder, and the man in prison for killing her is an active participant in the show.

What works about its storytelling is that host Sarah Koenig is basically letting us tag along as she investigates. Of course, to make a show seem so casual and effortless actually requires a lot of effort: research, planning, script-writing. But there’s a constant sense of discovery, and even though the conclusion of the podcast itself was not as satisfying, that’s real life, and the journey to that point is absolutely worth the time.

It’s also the reason season two of Serial, which focused on Bowe Bergdahl, lost me early on: they were relying on someone else’s reporting and audio, and it didn’t have the same magical feeling of exploration as the first season.

If you haven’t heard it, and especially if you’re new to podcasts, Serial season one is an excellent place to start: it’s an excellent model of the form’s best craft, journalism, and storytelling.

Startup (season one only)

Startup is the story of a company told in as it happens: Former This American Life producer Alex Blumberg set out to create his own podcast empire, and recorded the results.

It’s real-time drama, starting with an episode-one scene featuring Shark Tank’s Chris Sacca, who critiques Blumberg’s pitch to investors. It’s so awkward and so amazing. That combination of riveting tension continues all season long, from negotiations over salary with Blumberg’s business partner to various mistakes, including one that made news.

Blumberg and company’s willingness to share the behind-the-scenes of their triumphs and screw-ups makes for a great listen. Alas, in season two, Startup abandoned that subject, following a different startup, and in season three, they went with a new format, focusing on different startups in each episode.

None of them have been as wonderfully entertaining as season one, but thankfully that’s still available now, three years later, one of the many wonderful things about podcasts.