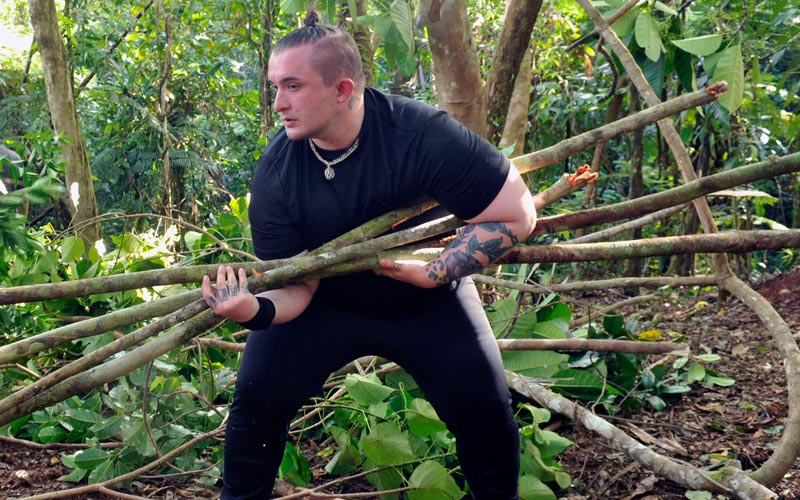 Yet another take on the survival reality series comes to television tonight when Kicking & Screaming debuts (Fox, 9 p.m.). It’s a competition between experienced, expert survivalists and people who’ve never actually been exposed to sunlight or had to carry their own suitcases. At least, that’s how the show wants us to imagine the difference between the two groups, since they’re paired off to compete for $500,000.

The resulting show is vintage Fox: a show with some strategy and some survival and challenges, and a host (New Girl’s Hannah Simone) who is so very out of place. It all feels all very 2004—including the attempt at comedy.

After watching the first episode, I wasn’t as annoyed as I expected to be from the previews (someone is really convinced that grating personalities will draw viewers), and the show itself was more low-key, especially as the hour wore on. But I also wasn’t super-excited like I was after this survival competition’s premiere.

One of the “pampered partners,” as Fox describes them, is Maxwell Carr, who reached out and identified himself as a reality blurred reader and a reality TV superfan. With a Fox publicist on the line, we talked about his experience and what it was like to be on the other side of the camera.

“My love of reality TV started with Survivor and then it grew onto other shows,” Maxwell told me, citing RuPaul’s Drag Race, Big Brother, and The Real World. But he knew Survivor was not for him: “I’m not athletic enough and I’m probably not serious enough to be on a show with so much strategy.”

He told me that he’s “always been interested in reality and how it works, and the social dynamic with strangers,” and in Kicking & Screaming, he found “a more light version [of Survivor] where I could make fun of myself.”

Maxwell definitely does that, and/or the show mocks him—gently, but there’s definite mocking. He’s introduced sipping champagne in a robe with a dog on his lap; he stumbles up the shore with his suitcase. (Yes, this is the kind of show that wants us to believe that the contestants themselves brought suitcases to the jungle for a survival competition.) He also gives great soundsbites, saying things such as, “I’m just full of chemicals and bad decisions” and “I would literally do anything for a cigarette and a shower, in that order.”

So what does Maxwell think about the show’s attitude toward the “pampered” half?  “Growing up, I was bullied a lot for being gay and overweight and being myself,” he told me. “As I get older, I keep trying to push myself outside my box, because I think it makes me a better person.”

“What better way than to go on tv and let the public laugh at me?” he asked, and added that he is not at all concerned about how viewers on social media will respond to his on-screen persona. “I think it’s funny whether people are laughing with me or at me. There’s nothing that anybody online can say about me that I haven’t heard since the seventh grade.”

What it was like being a cast member on Kicking & Screaming

One of the things I liked best about the show was that there wasn’t a lot of forced conflict between the team members. Sure, there’s in-the-moment-of-competition irritation, but there seems to be more genuine affection, even in episode one.

Maxwell said his survivalist partner, Tamra Hyde, was “a very positive, very nurting person.” He admitted to me, as he does in the first episode, “I don’t do well with pressure” and “I can’t with people when it gets really tense,” and that led to some mid-challenge conflict. “After I got over myself, I made up with her,” and they’ve remained friends since.

When Maxwell applied for the show, its concept “was hinted at” but “wasn’t super-clear,” he said, though it was “when we sat down to read the offiical rules” on location.

“I was very self-aware going into this knowing I was going to be one of the most out-of-shape peoeple, and everybody [else on the pampered side turned out to be] a model or actress,” he said. “I knew it was going to be a really big challenge for me,” but he wanted to have the “best attitude that I could” to “prove to other people who doubt me or my appearance or stereotype what they thought I might be.”

Kicking & Screaming was filmed in Fiji, and Maxwell said the survival element “was hard. I knew it was going to be hard.” And it involved a lot of effort: “I kind of assumed I could get everybody else to do it for me. But we got there and they expected us to work.”

An element of potential strategy is introduced in the first episode, as the challenge winners have a choice between luxury or the power to send another team into the elimination challenge. The strategy part doesn’t go very far in episode one, but I asked Maxwell if he had a sense of how he’d play the game before it began.

“I didn’t have a set strategy,” he said, “I know from being a fan of reality other shows” that a set strategy can be “a disservice. You never know what kind of people you’re going get. I just went in and thought that I was going to get the best read I can on people, try to make as many friends as possible. My game was really a social strategy.”

And he did connect with other people. “The people who were on the show—especially the novices with me—were all really genuine people. We’re not really making anything up. We’re all just ourselves.” He did say that the competition for the $500,000 did ramp up: “people get a little more cutthroat as it goes on,” though “we all understand it’s a game.”

Living in front of cameras in an extreme environment, Maxwell said, taught him a lot about reality TV production (“to actually be one of those moving pawn pieces, it was really interesting. It made me respoect what goes on behind the scenes”) and about owning his words.

“I learned you have to be very careful of what you say. Even if you don’t mean to say something in a certain way, it’s not what you mean, it’s what comes out of your mouth. It really taught me to own it. If I say something that’s bad, rude, if I have a freak out, own it, as opposed to just deflecting,” he told me. “I was really responsible for my actions and my words, and that doesn’t really doesn’t happen in my real life.”

While that’s serious introspection, Maxwell told me that Kicking & Screaming “is really lighthearted,” and said, “I’m just excited for people to have a laugh. We need more lighthearted TV because everything else is so depressing.”