Channel 4’s version of The Great British Bake-Off announced its new hosts and judge last week, news I missed probably because I’m trying not to imagine GBBO without Mary Berry, Mel, and Sue.

Prue Leith will join Paul Hollywood as a judge, while Sandi Toksvig and Noel Fielding will host.

The hosts are not a preexisting duo like Mel and Sue were. 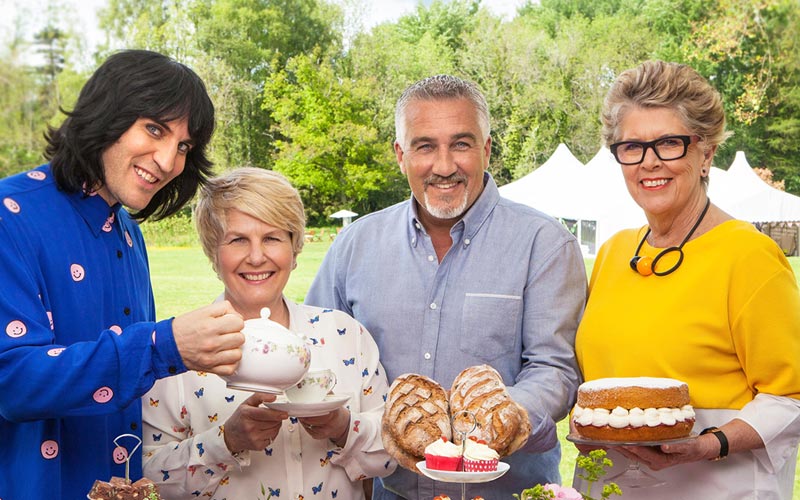 An expert interviewed by The Guardian said “Toksvig is the older comedian and a very interesting woman who has done QI [Quite Interesting, a trivia game show] and gone on from Radio 4; she’s edgy or establishment Radio 4. And then with Fielding you have this disruptive creative comic figure who is quite playful and sweet.”

In the press release, Sandi Toksvig said, “It is an extraordinary honour to part of this national treasure of a show. Noel Fielding is one of the nicest guys in show business. The first time I met him I felt like I had met a rather wayward cousin whose take on the world made me laugh. The only down side is that he has much better dress sense that I do.”

Fielding said “GBBO is one of my favourite shows. I’ve always loved brightly coloured cakes and Sandi Toksvig so this is a dream come true for me! It’s basically the double.”

The eighth season will air “later this year,” Channel 4 said, and assuming PBS continues to broadcast it in the States, as The Great British Baking Show, we’ll probably see the new cast sometime in 2018.

Next: How to watch all seasons of The Great British Bake-Off in the United States.