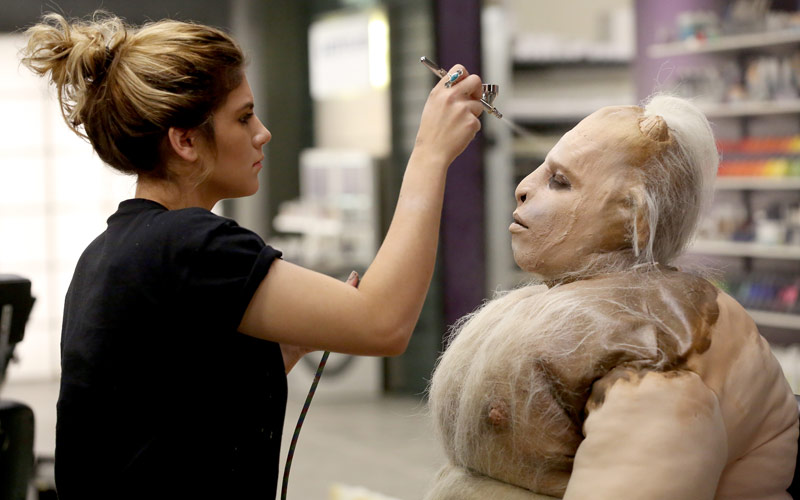 Face Off All-Stars contestant Emily Serpico works on a makeup during the "Odd Couples" episode. (Photo by Jordin Althaus/Syfy)

Thanks to a combination of factors—bringing back all-star contestants; having them work in teams; and giving them well-conceived and creative challenges—Face Off is experiencing something of a renaissance in its 11th season.

The show has never lacked talented artists, but it has had weaker contestants; it’s never failed to challenge those contestants to do their work under creative and time pressures, but it did stay in a relatively safe, predictable place for several seasons.

Starting with that super-cool green screen challenge set a high bar, but the challenge producers on Face Off: All Stars (Syfy, Tuesdays at 9) have continued to keep the tasks at that level, and have really taken advantage of having two artists on each team. The Jekyll and Hyde challenge, for example, had them create two characters at different stages of transformation, which produced some remarkable work.

Alternating weeks of immunity and elimination have also given the show freedom in the non-elimination weeks that it has taken full advantage of: For the Monster High doll challenge, a focus group of superfans judged the makeups; last week, the dystopian vehicle challenge gave the bottom three teams another hour of last looks to improve their work based upon feedback. (Although that do-over was ostensibly linked to product placement for a car, I absolutely loved that second chance, and wish it’d become more of a regular feature.)

Every episode has managed to surprise me with a new twist or least has produced a wow! moment.

Sure, there have been misfires, and some of these teams are on fire (Emily and Tyler) while others are choking (Ben and Evan, Logan and Adam). But for the most part, being in friendly, workable teams—the producers consulted the contestants about who they’d like to partner with—has benefitted everyone, including viewers.

Everything is working so well for Face Off this season that the only thing I have left to complain about is McKenzie’s awkwardness and the formulaic-to-the-point-of-stilted judging segments. Project Runway is so relaxed in comparison they might as well be smoking marijuana and wearing their pajamas while lying in bed together. Watching Face Off, I know exactly what musical beat I should start fast-forwarding to skip past the cliffhanger and arrive at the real announcement of the winner.

Well, except for the second-chance episode when I started fast-forwarding and suddenly realized I was fast-forwarding over actual content. Yes Face Off: All-Stars has consistently surprised me, and I’m looking forward to seeing what the rest of the season has to offer.