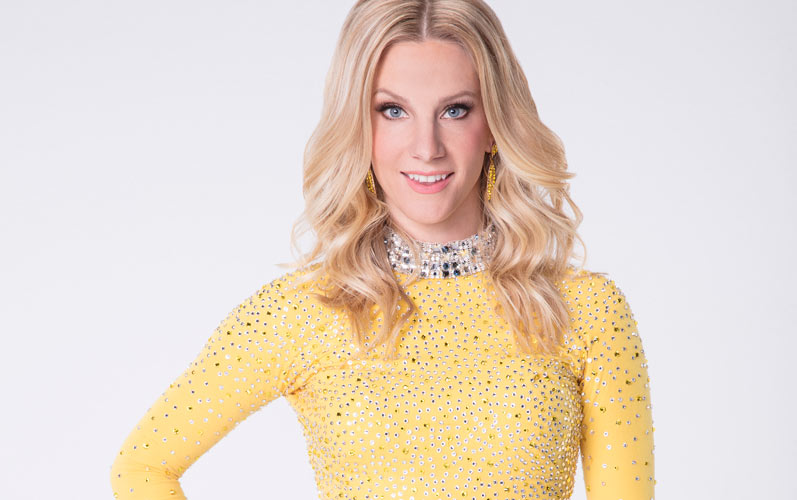 Dancing with the Stars has new showrunners: Joe Sungkur and Ashley Edens have taken over from Rob Wade, who is Fox’s new reality executive. Interestingly Wade took over in 2014 for Conrad Green, who left to produce a reality show at Fox, Utopia.

The first in-depth interview I’ve seen with them is in THR, and their performance in that interview merits a score of about, oh, 3 on a scale of 10. They’ve been working on DWTS with Wade, so they’re not new to the show, and that’s in part why these answers are so disappointing.

To start, there’s this dismissive exchange, prompted by Bachelorette Kaitlyn Bristowe’s shocking revelation that she was actually cast on Dancing with the Stars but then prohibited from doing the show by Bachelor producer Mike Fleiss, who gave her a laughable excuse: “He said he didnt want people wanting fame after his show,” Kaitlyn tweeted.

Instead of addressing what happened there—or showing some courage, or honesty—DWTS’ showrunners give the “Eh? <shrug>” answer:

Can you see why the fact that there have been more Bachelors on the show than Bachelorettes is troubling to viewers?

Edens: We had Trista [Sutter]. [It’s] based on when we’re casting and the whole cast we’re pulling in and what other reality stars we already have in place.

Sungkur: Who knows what could happen in the future.

Yeah, who knows! Not the people who are in charge of the show, that’s for sure.

I realize it might be uncomfortable to even discuss a showrunner of another major ABC reality hit, but I would appreciate some honesty. And that doesn’t mean their answer has to be Fleiss is a sexist monster—you saw UnReal!—and we really wanted Kaitlyn, but that clown controls her contract.

It might have been something as simple as, The Bachelorette ends six weeks before our fall season starts, but The Bachelor ends just before our spring season, the perfect time to take advantage of The Bachelor’s dwindling fame.

Whatever the actual reason is, “who knows” is a weak answer from the people who make actual decisions for one of television’s biggest shows.

Does Beyoncé’s back-up dancer have an advantage or not?

The other exchange is about Heather Morris, a contestant on this season who I did not recognize by name. But it turns out she’s quite an accomplished dancer.

Heather started her television career in 2006 on So You Think You Can Dance and went on to become one of Beyoncé’s backup dancers, touring with her and dancing at the Grammys. She was cast on Glee, as Brittany, after being hired to teach the Glee cast the choreography of “Single LAdies.”

So yes, someone who is paid to teach actors choreography and who already competed on a broadcast network dance show is now competing against Mr. T. Is that, you know, fair?

Showrunner Ashley Edens was asked about that by THR, and her answer was clear:

Edens: No. We looked at that a lot. Does she have an advantage? Yeah. Is it unfair? No. She has never had a ballroom lesson. She’s never partner danced. That is a skill in and of itself. Does she know how to count music and have rhythm? Yes. But the expectation because she’s a dancer is going to be very different than someone like Rashad Jennings, who is an athlete coming into this. But Heather is finding it challenging because it’s like learning a new language. It’s foreign to her. She has not ever partner danced. It will be interesting to see the dynamic between she and Maks.

That answer resulted in an Andy Cohen-style follow-up (always blame the viewers for your toughest questions) that revealed a totally different answer:

Do you have anything else to say to fans of the show on social media who are saying it’s an unfair advantage?

Edens: We’re not shying away from the fact that she 100 percent has dance experience. Because of that, she will be judged on a higher level and there will be higher expectations on her.

Hold the crappy mirror ball trophy for a minute.

Let’s review the information in these answers, shall we?

This seems like the equivalent of casting Gordon Ramsay on Chopped and then saying, Well, he is a chef, yes, but since he’s never competed on Chopped, he doesn’t have an advantage, but since he has virtually mastered all of the skills necessary to compete on our show, we’re going to judge him much more harshly. But he’s the same as every other contestant. Just except we’re judging him more harshly.

Sungkur: In the past, we’ve had people like Zendaya and Corbin Bleu and people said they had an unfair advantage, but they didn’t end up winning the show.

That answer only makes sense in a world where this is a pure talent competition. But this is not Chopped or Top Chef. It’s a competition decided in large part by viewer votes, i.e. this is a popularity contest, not an evaluation of someone’s skills.

And ultimately, that’s why I think it doesn’t matter Heather Morris is on the show: Sure, she can dance, and yeah, she’s a lot better at it than most of her competitors, and yeah, it’s absurd that the producers think the way around this is to simultaneously argue that she has no advantage yet has a big enough advantage that she should be judged more harshly.

All of that leaves out the most critical and impossible-to-predict component: viewers and their arbitrary votes for whoever they like the most once the dancing and drama begin.