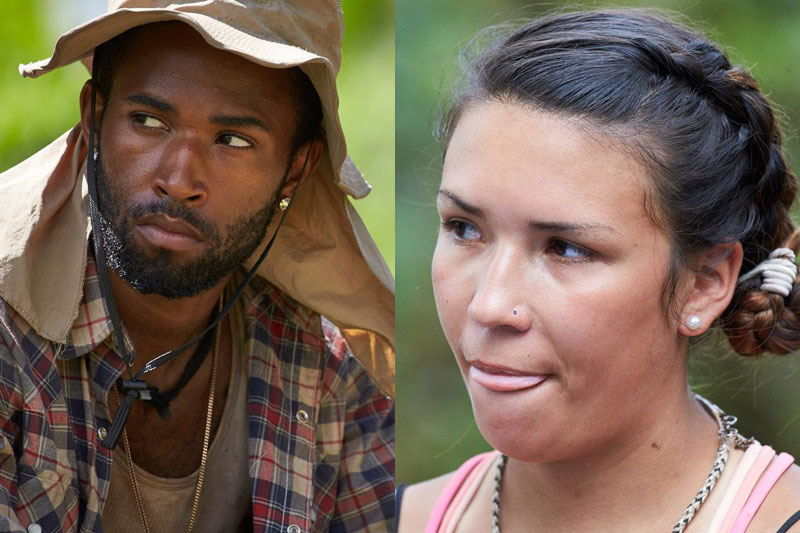 Alonzo and Eilish both exited Stranded with a Million Dollars during its sixth episode. (Photo by MTV)

Stranded with a Million Dollars contestant Alex Apple is writing about the show this season for reality blurred—and answering your questions. Today, he writes about episode six, “Til Sickness Do Us Part,” and Alonzo answers one reader’s question. If you have questions for next week, comment below or send questions via this form.

Installment six of Stranded with a Million Dollars saw the alliance that’s been the “core four” come screeching to a halt thanks to an unfortunate spat of sickness and a need for emergency surgery.

Spoiler alert if you have not already seen the episode: Alonzo left the game after seeing the medic due to some gastroenteritis—a stomach issue that usually lasts around three days that is both uncomfortable and inescapable. Alonzo’s choice: stick it out or get out. My hunch is mental exhaustion contributed to his decision to leave the game.

Just one night later, Eilish woke up in the middle of the night needing to see the medic as well. Below, I’ll describe how a routine night turned into a life-threatening emergency. But first, a quick side-note.

Watching the show back, I laugh at how stupid buying pizza or a sandwich was compared to something that could be rationed.

I’m not going to throw anyone under the bus but certain members of my alliance definitely felt a pizza or burger calling their name—and I certainly enjoyed them as well—but I should have fought a lot harder for items that could have been rationed easily.

Earlier in the day, both Eilish and I had gone on the temptation that was washed out and miserable. Neither of us had been feeling well, and we both assumed that we were afflicted with a bit of what forced Alonzo from the game just a day earlier.

For the previous 48 hours, I had actually been far sicker than Eilish. I hardly slept and could not go 30 minutes without having to find a nice sandy spot to use the bathroom. In what was the longest night for me on the island, I stood on the beach all morning watching the sun rise and stars recede.

It was a miserable time in which I spent most of the morning without pants on.

I was not going to let sickness force me from the game in the same way it did Alonzo (not knocking him because everyone’s limits are different). So on the night that Eilish woke up complaining of intense pain, I had been up already handling my own sickness. I was walking back to the tent when she said she felt like something might be wrong.

We sat up and talked about how she was feeling for around an hour before she made the decision that she had to see the medic. The medic’s name is Tam—who is a great character in his own right—and he came to do an initial assessment of Eilish’s condition.

This was one of the few times in a show filmed largely by drones and robocams where we saw a crew member up close.

I recall Tam pushing on Eilish’s stomach, standing up, chatting with another crew member and then coming back to tell Eilish that she needed to go up to his medical area. He said there was a chance she could come right back to the game, but we learned later that he knew right away something was seriously wrong.

Gina and I got a little rest and woke up the next morning unsure if Eilish was coming back to the game. Turns out, she had been flown to Fiji’s biggest island: Nadi. She had an immediate surgery, and thanks to Tam’s diagnosis, a potentially life-threatening situation was avoided.

I felt for Alonzo when he left because I knew he needed the money and wanted badly to say he survived, but my reaction to Eilish’s departure was something entirely different. There was never any doubt in my mind that she would last 40 days because she was the sturdiest one out there. Only a severe sickness was going to take her out.

It could have been any of us needing appendix surgery—at any point in our lives. For Eilish, it just was not meant to be, but she’s an inspiring example of strength. She’s mom-tough (and I don’t know many mothers that aren’t).

In an interview with the selfie camera, Makani said something that was hard to hear with her dialect, but as the subtitles explained she wished sickness would put all of us in the hospital.

Fortunately for Gina and me, she did not get her wish.

Questions for Alex, an answer from Alonzo

Now for this week’s questions…

Nicki asked: I was surprised after watching Stranded with a Million Dollars by the harsh comments about Alonzo. It seems like some of the cast members (i.e. Cody) and many viewers are completely clueless about PTSD and why this condition could make the hardships of the island affect him so negatively. I’m shocked by the lack of compassion. Does Alonzo ever get a chance to explain or does the narrative of the show touch more on this subject?

Nicki, I thought the best way to answer this was to have Alonzo offer you an answer personally. He sent me the following statement:

“Well, I’m not surprised at the harshness because there are many more ignorant people than intelligent people out there in the world. It’s almost impossible to hold the viewers to a high standard of intelligence.

I often wonder if I’ll ever get a chance to explain myself, but unfortunately, that’s not up to me, and I do not control the narrative nor do I control the opinion of viewers who have honestly seen very little of the story and all of its facts (versus what something may have looked like on TV).

Nevertheless, I enjoyed my experience and would do it again.”

I would also add that four days of life is boiled down to 44 minutes of entertainment each episode.

I laugh when viewers of reality shows get upset and tweet at cast members things like “kill yourself” or whatever mean thing they come up with. It’s a shame their lives are not more interesting and that they have so much free time that commenting crazy shit is their hobby. Most of them are just hungry and need to eat a Snickers.

Secondly, they forget that Stranded is a game. You’re competing against one another. Not only are the scenarios you are in not something you encounter in real life, but you react differently as well. No one plays to be polite and roast marshmallows. That would make boring television, and the peanut gallery would not tune in.

First, I realized Cody’s strategy like 30 minutes after meeting him. He was not good at hiding it. He made it really easy to anticipate how he would act or what he would do.

If half my alliance had not gotten sick (incredible luck on his part), then he would have had no say in anything that ever happened. Same dog using old tricks.

Secondly, Makani is from somewhere in Massachusetts. As the “cash me outside” girl might say, that accent’s “from the streets.” That’s my guess, at least. I really have no idea because she only talks in that accent about half the time.

Carter commented: Why did Makani have to carry the extra bag when one other girl was carrying the pot and the other wasn’t carrying anything much heavier. Wouldn’t it have made sense for them to just rotate the darn thing?

Certainly would have. Both sides refused to carry things at different times. I tried most times to let other people fight their own battles on that.

Plus, Gina was not the most athletic soul in the world, so she might not have made it in time if she was bogged down with multiple heavy items. I love Gina, but journeys and challenges were not exactly her thing.

Stacy commented: I don’t understand how Alex doesn’t think that an item bought by the group has to be shared. It was a rule that they read out loud on the show themselves.

Stacy, as I said last week, that is not a rule. You misheard if you think that was read aloud. We were not allowed to break rules of the show (for example, can’t destroy an item while someone is using it). The rule is majority had to vote to buy an item. Think about it from a producer’s perspective: kumbaya sharing makes for boring television.

Alex Apple is a season one cast member on Stranded with a Million Dollars and works professionally as a journalist and public speaker. You can follow him on Instagram, Twitter, and Facebook, or visit his web site.