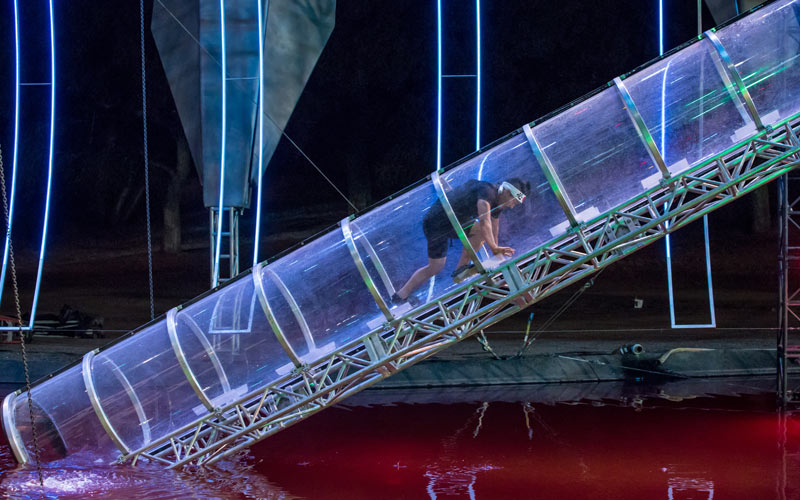 One of Ultimate Beastmaster's moving obstacles. (Photo by Robert Voets/Netflix)

Netflix’s first reality competition series, Ultimate Beastmaster, arrived today. While it owes a lot to NBC’s American Ninja Warrior, it turns out that the genius part of the show’s business strategy turns out to be its best creative move, too. The draw here is not Sylvester Stallone, who appears in the trailer and the introduction, monotoning his way through some scripted lines before evaporating, but rather the international model.

As a competition, Ultimate Beastmaster has stepped up the game, but it hasn’t reinvented the obstacle course reality competition. It’s basically taken Ninja Warrior’s basic format and piled on more things and new elements: 108 contestants, 12 hosts from six countries. Not only does time tick by, but points are tallied, and there are bonus points for flipping “point thruster” switches located in hard-to-reach places.

Each episode starts with 12 contestants, and they progress through groups of obstacles, similar to the structure of the Las Vegas ANW finals course. Those with the fewest points and slowest times are eliminated after each round, eventually leading to a head-to-head competition. The winner moves on to the final episode.

The obstacle course is housed in an impressive structure that resembles the body of a giant beast-thing, and contestants start by entering its mouth, framed by massive teeth. It’s a nice touch. Some of the obstacles they encounter have generic names, such as “chain reaction” and “tricky trapeze,” but many are named for their locations in the beast’s body structure, such as “spinal ascent,” the “sinking digestive track” and “hanging vertebrae.” The water that catches contestants when they fall is red, and U.S. co-host Terry Crews calls it “blood.”

Several obstacles use motion in clever ways: there are suspended treadmills and ramps and platforms that spin and move. The mag wall has hand holds that fall off the wall. Sometimes motion adds urgency—obstacles sink into the water, for example, or move away from the next obstacle, making the leap between them more and more challenging.

While the ANW obstacles seem to focus on raw muscle, especially requiring a lot of upper body strength, many of these obstacles seem to be more about agility—though I am not suggesting that these contestants also aren’t impossibly strong, and they certainly have plenty of opportunity to use upper body (and all parts of the body) strength in this course.

They’re well-conceived challenges, and the design absolutely improves on the ANW model, though there’s no escaping that these are still just temporary obstacles over water constructed with metal trusses. The final stage is even a Ninja Warrior-style giant tower. That said, I did not miss the live audience and ANW’s sweetening to make that audience sound like it is cheering nonstop.

Unlike Ultimate Beastmaster’s beast, which is unnecessary but fun to look at, there’s a lot of unnecessary chaos that’s no fun to watch. Introductions to competitors come via a “private data file” that includes a fingerprint image and data visualizations that don’t seem real. It’s overwhelming, especially at first, as all of this flies by, and contestants move up and down the leaderboard.

It’s much more enjoyable, though, just watching the contestants attempt obstacles inside the colorfully lit beast.

On the American version, an international cast

Beast aside, what’s most distinctive about Ultimate Beastmaster—and what’s gotten the most press—is that the show has six localized versions. The United States of America, Mexico, Germany, Brazil, South Korea, and Japan all of their own hosts and set of competitors. That gives Netflix six shows from one production, and shows that appeal to nationalism and help spread Netflix across the globe.

Having an international cast and six host teams means that Netflix has six different versions of the show, but the other 10 hosts aren’t ignored in the U.S. version—instead, there are frequent cutaways to other hosts, and sometimes a six-way split screen that shows everyone’s reactions to the same thing. At times, I wished we could swap hosts, because Terry Crews and Charissa Thompson are the most generic and bland pair of the six.

I think I expected that the localized version would focus on contestants from that country. Nope. Episode one doesn’t even get to an American for a few runs. I really appreciate that the U.S. version isn’t just focused on the American contestants, nor is it afraid to celebrate victories of contestants from other countries. This is simply a reality competition with an internationally diverse cast, and like the Olympics at its best: rooting for your team but celebrating epic success by everyone regardless of the flag on their uniform.

I’m not going to pretend that the show is some kind of border-collapsing revelation, especially with executive producer Dave Broome telling a Variety reporter that an edit bay full of editors who spoke different languages was as “like an International House of Pancakes” and Netflix CEO Ted Sarandos imagining that this show alone was going to redefine television for people in South Korea, as if people there never watched a competition show: “When Beastmaster hits in Korea, they’ll never have seen anything like it.”

Also, let’s not forget that while this is a nice evolution, it’s not a brand-new idea—not even the internationalization is new. After all, Sasuke, the Japanese show that was adapted into American Ninja Warrior, had international contestants and aired around the world, using voice overs and dubbing to create versions for different locations.

Ultimate Beastmaster also makes a few weird choices: While it’s not afraid of subtitles, the U.S version repeatedly subtitled the hosts from Mexico saying “No!” even though, you know, they’re the same word in English and Spanish, and it also subtitled the South Korean hosts when they spoke in English, saying entirely comprehensible things such as “world ice climbing champion.”

Those are relatively minor missteps, though. Fans of Sasuke/Ninja Warrior and NBC’s version will find a lot to love here, and Ultimate Beastmaster offers an excellent model for ramping up both the competition and the diversity of physical competition reality shows.

And it’s certainly not a bad time in the history of the world to be reminded that, regardless of country, skin color, or national identity, we’re all just running on the same course, doing our best to not fall, and helping each other up when if we do.