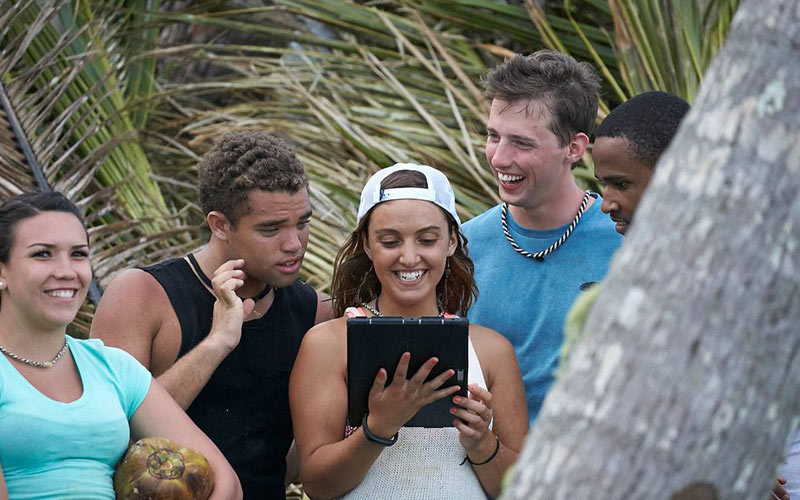 Alex, second from right, with other Stranded with a Million Dollars cast members. (Photo by MTV)

Stranded with a Million Dollars contestant Alex Apple will be writing about the show this season for reality blurred—and answering your questions. Here, he writes about episode one, “Game of Drones.” To ask him about strategy, survival, or anything else, comment below or send questions via this form, and look for answers next week.

Consider it a fascinating transition to go from fan of reality television to reality contestant. That was my transition last year when I left the connected world behind to compete on Stranded with a Million Dollars.

I was a broadcast journalist at the time reporting for the CBS affiliate in Northern New York, New Hampshire and Vermont, having great success covering the Iowa caucuses and South Carolina primaries.

I had come across a casting call for an “untitled survival adventure show” which turned into Stranded with a Million Dollars. I decided to apply out of a zest for adventure, a love of the unpredictable, and a desire to push myself in a way that I had not previously been tested.

Nine other cast members and I readied ourselves to land on a largely barren island with no idea what rules, challenges or game lay ahead. As cast members, we learned the rules of the show just as the audience did in the first episode. Over the first four days, a drone and tablet brought us news that we were stranded on the island with $1 million in cash, challenged to last the 40 days and facing a host of obstacles designed to test our will and make us quit.

Building a camp—and game—out of nothing

If there are any skeptics that question whether we were actually challenged to build our own shelter, realize that when Alonzo, Makani, Eilish and I entered the first campsite, we were the first to arrive. We walked into an empty beach with overgrown ground cover and palm trees—and little else. My first question was how in the world are we going to make shelter?

There were no long pre-cut sticks, not much wood to speak of at all aside from the hundreds of palm trees that littered the beach. The only thing that signaled a camp site was the circular array of robotic cameras set to film our every move.

We quickly realized that we were nearly alone. Robotic cameras and drones were following our movements. A wireless microphone recorded our conversations. This lifelong Survivor fan was finally learning what it was like to be on the other side of the camera lens (except we were not pre-given any supplies and had to survive an extra day; a more difficult survival scenario by any measure).

The most important gameplay that took place over the first four days was the 10 of us figuring out how to play the game.

Like season one of Survivor, there is no precedent for how to play the game, no model to follow. The unprecedented aspect elicited a range of strategies from the 10 of us. Here were our main approaches:

My hunch is Michael and Bria realized their error once Bria fell sick.

Four days are compressed into one hour, and so much is not shown. A bulk of our first four days were spent cracking coconuts to eat and drink. It was all we had. It’s a shock to the system to begin your survival journey with four solid days of just coconuts. Bria drank a rotten coconut and in a matter of hours, her shot at $1 million was over. A lesson to all of us: you better be careful.

The show has already shown one cast members’s mistake that will cause them to follow Bria off the island. It was a subtle reference in episode one but a damning mistake the will end the pursuit of the money for another person on the island.

Think hard: you might be able to figure it out.

It was becoming increasingly clear that Chris and Cody did not care to work with the rest of us unless they felt like they could use us. As someone who perceived themselves as a socially-strategic player, I knew that was something that could be exploited. Isolating yourself in a social game is rarely a good idea.

The tag line for the show is a “brand new social experiment.” Key word: social. You probably should not put every one off at the first camp.

As night three started to fall, everyone was gaining familiarity with the camp, but many of us thought at least one person would flair-out and fail to make it through the night. If oddsmakers had been on the island, 2-1 odds would have been placed on Gina to go. She cried every day. She screamed at every bug and shriveled up like a prune when she got wet.

And wet, she would be that third night. Pro tip: do not build a shelter with a flat top when you are trying to survive in the tropics. Alonzo, Makani, Eilish and my shelter was about as waterproof as a spaghetti strainer. Nothing feels better than freezing cold rain running down your back when you’re trying to sleep.

I remember looking up over and over that night at the green dot that was just below the robotic camera filming our every move. I must have looked at that dot, 300 times that evening as I laid awake and wet under our palm frond shelter.

Originally, a rain jacket was part of the clothes-on-my-back wardrobe, but the night before filming started, I decided to scrap it. Bad decision.

Alex Apple is a season one cast member on Stranded with a Million Dollars and works professionally as a journalist and public speaker. You can follow him on Instagram, Twitter, and Facebook, or visit his web site.