Skip to Content
Categories Stranded with a Million Dollars

Almost 17 years after it first aired, Survivor‘s first season still lingers, affecting how I watch certain shows. In strategic reality competitions, especially ones set outdoors, I’m looking for a little bit of the magic I experienced back then, watching a season of television unfold a strong formula and while everyone—producers, contestants, viewers—continued to discover new things along the way.

But Stranded with a Million Dollars is easily the best and most innovative MTV show I’ve seen since Catfish. It’s a well-conceived, well-cast game.

There’s real discovery here. The cast members, as one of them says moments into the first episode, have no idea what to expect. So when a helicopter drops $100,000 and an iPad/tablet with instructions, they’re finding their way into this game. The basic rules are simple: Survive 40 days by themselves and split what’s left of $1 million after purchases of overpriced supplies. There are no camera crews or physical competitions; no host or narration.

But Stranded has not left its contestants alone with just that conceit.

The game is introduced to both viewers and contestants throughout the first episode, so skip these bullets if you want to be surprised and learn about them as they come up. Here are its components, as of the two episodes I watched:

These three elements each present fascinating opportunities. Should they buy food? Matches? Water? A tarp? Should they align with each other to ensure a majority vote? Should they carry someone or bully that person into dropping out? Should they take temporary pleasure at the expense of the others?

The cast strategizes their way through these decisions in unexpected ways. They forge loose and rigid alliances. They make bad decisions and lie to each other in pathetically obvious ways. They suffer from the elements.

And altogether, the game works.

But. Yes, sorry, there’s a “but.” But while there’s a strong game at the center, this is also an MTV show, and the trailer shows plenty of fighting. The question is whether or not that fighting takes over—whether the casting has ruined a concept and strong execution.

Stranded with a cast of 20-somethings

After two episodes, the answer for me is no, the fighting does not take over.

There is conflict, but at least early on, it’s organic and interesting enough that it doesn’t feel like the drunken masculine peacocking that occurs on The Challenge, where on the first night together dumb bros are shirtless and punching each other. (Stranded with a Million Dollars does get precariously close to that at one point, but at least the conflict emerges naturally out of previous events.) 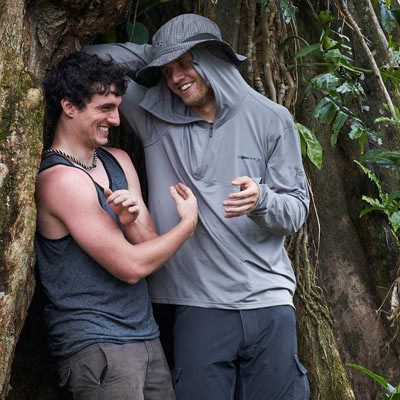 Alliance bros Chris and Cody on Stranded with a Million Dollars. (Photo by MTV)

In Stranded’s cast introductions, we meet Cody, who describes himself as “an alpha male” and is in the Texas National Guard, and Bria, who tells her confessional camera, “I’m going to be the bad-ass bitch of this jungle.” And then there’s Chris: “I feel like I’m going to out-survive all of these cub scouts and little bitches.” (There’s also a gay Eagle Scout, Michael, to whom Chris may or may not have been referring.)

Not everyone is this immediately abrasive. Several of the contestants actually fade to the background and emerge later.

Alex, who’s 24 and a local TV reporter, emerges as an early sort-of leader, quickly realizing that “we need each other out here if we’re going to last for 40 days.” (Full disclosure: As I learned when he contacted me recently, Alex is also a reality blurred reader, and he’ll be offering insights the morning after each episode and answering your questions. Watch for that tomorrow.)

While Cody never quite drops the bravado, he ultimately seems like an early candidate for the Richard Hatch of this game: arrogant, frustrating, manipulative, but fascinating, the first to figure out this is a game, though perhaps not the best at playing it. There’s interesting strategy there, wrapped up in a frequently dickish package.

Of course Chris and Cody team up, and even have their own isolated shelter. The way their decisions play out in the first two episodes offers a pretty incredible character arc.

That’s true of many of the cast members, actually. and especially true of their success and/or failure as a group. I won’t reveal anything, but in the first two episodes, the amount of money they do or do not spend, and the number of people who do or do not tap out, really surprised me.

A new perspective, thanks to drones and robots

Stranded with a Million Dollars is produced by Tollbooth TV, a company run by people with deep reality resumes, and besides the game they’ve created, they’ve made strong choices for the production, too.

That starts with the fact that the contestants are basically alone on in their campsite on a small island in Fiji. The credits note that “contestants reecived assistance during the series for health, safety, and medical reasons,” but it seems comparable to Alone, where the participants are actually alone except when checked by medical teams.

SWAMD’s cast is alone because they aren’t being filmed by camera crews or, it seems, interviewed by producers, as they just talk into hand-held cameras for their confessionals.

Mostly, they’re being filmed remotely, with locked-off robotic cameras and drones that hover above and around the cast, Hunger Games-style. (There are also camera operators who shoot with long lenses from far away.) And though the absence of camera crews and robotic cameras has been used on reality TV before, including on Fox’s Utopia, the combination feels new.

Anthony Sacco—the Directors Guild award-winning director of The Chair, one of the most visually interesting unscripted shows I’ve ever seen, and the man who captured this footage—is the show’s director of photography, and his work is evident.

There are very few close-ups, and more depth of frame than I’m used to seeing in an unscripted television show. There are beauty shots that rival Survivor’s, but unlike on that show, the cameras are not invisible; there are also constant reminders that this cast is on television.

Because the show is filmed that way, there isn’t always a perfect shot of people talking; sometimes we’re looking at their backs, or they’re behind a tree while having a conversational. I’m inherently skeptical of this, because too many reality shows now use similar shots—ones where we can’t see people’s faces—and then overlay them with fake dialogue that’s been constructed entirely from other sentences or taken out of context. That may be happening in certain scenes here, but I didn’t catch any blatant frankenbiting in the first episode.

Although the show uses technology, it still feels stripped down and less-produced than most. With its production, and with its game, Stranded with a Million Dollars may not be staking out brand-new ground, but it’s surprisingly, excitingly fresh.