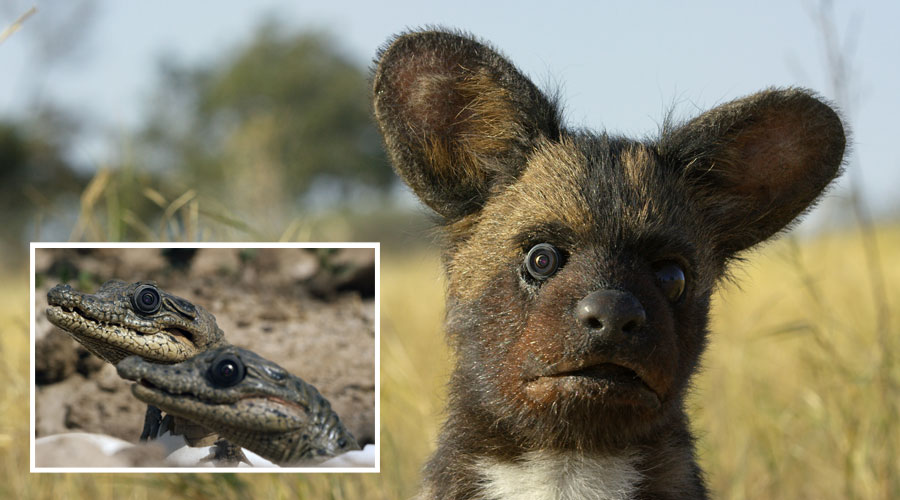 Spy Pup, a robotic dog with a camera as an eye, and two spy crocodile hatchlings (inset) from PBS' Spy in the Wild. (Photo by Richard Jones/John Downer Productions)

There is some extraordinary footage in PBS’ Spy in the Wild, a five-part series that debuts tonight and uses robot animals with cameras instead of eyes to film non-robot animals. In the first episode, a Nile crocodile picks up its newly born hatchlings in its mouth—including the spy camera baby crocodile.

The result is footage from inside a crocodile’s mouth.

That’s something I’ve never seen before in a nature documentary, and makes good on the narrator’s promise that these robot spy creatures “will change our perception of animals forever.”

I wish there was more like that, however. A lot of the footage is not at all from the spy robot animals, but instead from cameras, as many as 10, that are filming the robot creature. At the Television Critics Association press tour in January, I asked them why so little footage actually comes from the spy animals themselves. Producer/director John Downer said:

“The animatronic animals do not do all the filming, but what they do is give a dimension to that filming that allows us to go closer into the animals’ lives than ever before. They give us a first person viewpoint in among the family, and they reveal, through direct eye contact. … It’s not — everything is not shot on a long lens. They’re not these things you see in the distance in a very glossy, distanced way. You’re seeing real behavior up close and personal. And the whole point of the series is that we are going into various animal groups and revealing amazing emotional moments of behavior that you rarely would see. And part of that is because we shoot thousands of hours of material.”

And the presence of the robot animals—which look and behave like their real-life counterparts—sometimes affects the behavior of the real animals, as you can see in the second video below. (Get your tissues ready!)

The show’s producers were asked about interfering versus documenting during the TCA press conference, and Downer said,

“We also consult with scientists the best way of approaching we know that the animals that we’re putting in are not ones that would cause stress. You can never legislate against an accident of what happens. We went in to film babysitting. These langur monkeys have teenage babysitters. And the mums, when they get fed up and want a little bit of time on their own, give their babies to the younger teenagers to learn. And we were interested that’s what we were filming, and we went on to film that. We’d been there for several weeks filming with them.

They totally accepted the monkey. What we didn’t know is how well they accepted the monkey. So when they dropped it, although it was a moment that we weren’t expecting, it was also a total revelation. And it actually taught us something about how like us these animals are, and the fact that they can feel those emotions is something that, you know, was really justified in showing. But, of course, it wasn’t what we set out to do.”

What they did do, however, is edit the footage in very emotional—and emotionally manipulative—ways, thanks to the music and the anthropomorphization of the animals’ behavior.

Still, it makes for a frequently fascinating hour of television.