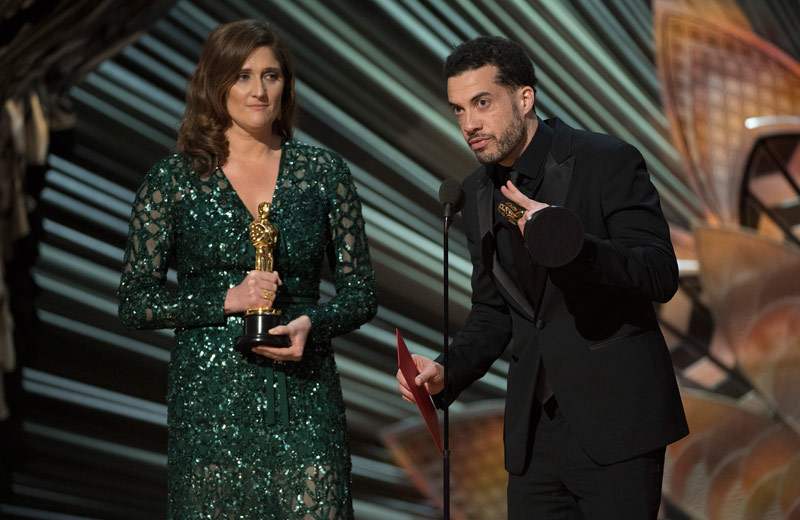 O.J.: Made in America producers Caroline Waterlow and Ezra Edelman, who directed the film/TV show and accepted the Oscar for it. (Photo by Eddy Chen/ABC)

The award was presented to producers Ezra Edelman, who directed O.J: Made in America, and Caroline Waterlow. Edelman accepted the award from the three stars of Hidden Figures, who first introduced Katherine Johnson, age 97, the real-life inspiration for Taraji P. Henson’s character.

Edelman immediately acknowledged that the Academy had just given an Oscar to either 1) a seven-hour, 47-minute film or 2) a five-episode television show. He said:

“I want to thank the Academy for acknowledging this untraditional film. I want to thank ESPN for allowing us the canvas and the time to tell this story—this was the only way it could be told.

Edelman then dedicated the award to the two people O.J. Simpson was criminally acquitted of killing and but found liable for by a jury in a civil trial:

“But I want to acknowledge that I wouldn’t be standing here tonight if not for two people who aren’t here with us: Ron Goldman, Nicole Brown. This is for them and their families. It is also for others: the victims of police violence, police brutality, racially motivated violence, and criminal injustice. This is their story as well as Ron and Nicole’s.”

And if you don’t know what those victims have to do with O.J. Simpson, you haven’t yet watched O.J.: Made in America, and you need to do so immediately. (It’s on DVD and Hulu.)

Edelman also directed two other ESPN 30-for-30 documentaries, Requiem for the Big East and The Opposition, and was previously nominated for an Oscar as producer of Cutie and The Boxer. He also won four Emmys as a producer on HBO’s Real Sports with Bryant Gumbel.

The White Helmets won the Oscar for best documentary short subject. The documentary, which you can watch on Netflix, follows the Syrian Civil Defense, a Nobel Peace Prize-nominated group of volunteers who wear white helmets while trying to rescue civilians in war-ravaged Syria. The Wall Street Journal called them “white knights for desperate Syrians,” and the Economist reported that “[t]he group has rescued more than 60,000 people since 2014, when it began to keep count,” while “Roughly one in six volunteers has been killed or badly wounded.”

Director Orlando von Einsiedel and producer Joanna Natasegara accepted the award. The film’s cinematographer, Khaled Khatib, was going to attend the Oscars and had a visa to travel from Syria to the United States, but Donald Trump’s Department of Homeland Security denied him entry by refusing to grant a passport waiver after the Syrian government cancelled his passport.

CNN profiled Khatib last week, noting that the 21-year-old “was responsible for much of the footage, capturing some of the most defining moments of the civil war: from men scouring rubble for life to the faint cries of newborn babies to the constant fear of when the next barrel bomb might be.”