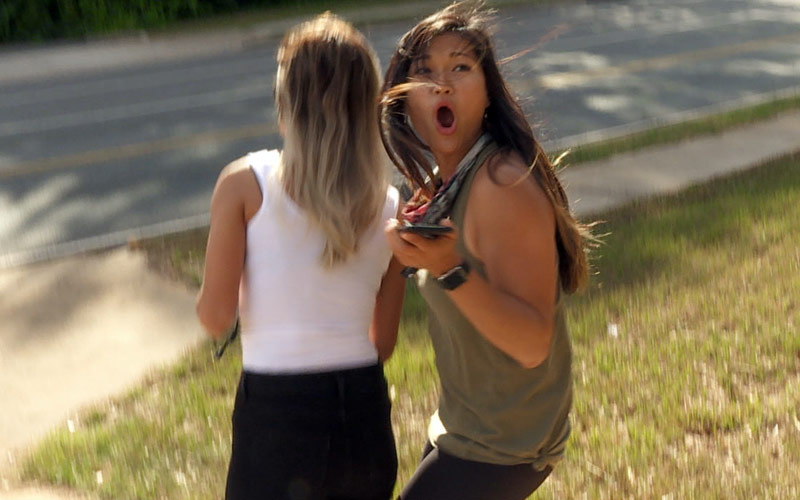 Sentra Tran and Thu Tran are captured on Hunted. (Image by CBS Entertainment)

Three episodes remain of CBS’ Hunted, and the show hasn’t gotten more transparent with viewers. It’s been two weeks since I fact-checked a scene in the show, finding that what happened on-screen didn’t match reality. At the time, I asked CBS for comment; I still haven’t received a reply.

I’ve since learned one rule from someone connected to one of the team members: Each team has to move at least five miles every 48 hours, and they are also required to use an ATM twice.

The latter rule gives the production both clear footage of the team’s appearance and their exact location, making a capture a lot more likely. However, it also opens up a whole box of sketchiness. Because a reality show doesn’t have access to ATM cameras, for example, the footage is provided by the production itself—someone with the teams sets up a camera to film, and then transmits it to the hunters.

An executive at Endemol Shine, the show’s production company, Robert Smith, told RealScreen in January, “We were really die hard about making sure this is what would happen as much as possible in a real life investigation.”

But how does that work exactly? And how can we learn more about what’s happening behind the scenes? By looking at Channel 4’s Hunted, which originated the format CBS acquired to make its version—and also by hearing from someone who was actually on the show.

On episode three, Sentra and Thu were assisted by a friend, identified on screen as Rob. The hunters use a receipt, clearly photographed by the production, of a burner phone, and then figure out (because, of course, the production told them) that the phone called Rob Futrell, their friend, and the hunters eventually interviewed him.

While he was only on screen for a short amount of time, Rob had extensive contact with both the fugitive and the hunter side of the production, and he answered questions on Reddit that offered a lot of information and insight about how the production worked. Here’s what he revealed:

“I had to sign a release before Thu and Sentra can come over… and when the Hunters showed up I refused to let them inside and they quickly escalated to the Producer who explained that the paperwork I signed gave them permission to come in. It was super confrontational and it ended with some not so pleasant verbal exchanges between me and the male Hunter.” (link)

Teams travel with a very conspicuous crew—including two cameras. The most immediate question about these kinds of shows is exactly how someone manages to hide while being filmed. And according to this person, there was quite the crew.

How the U.K.’s version of Hunted works

So, is there any way that the show could be more transparent with viewers? Yes, and I say that because its UK cousin is at least somewhat more open.

Channel 4’s web site has some details about the show, starting with this about the fugitive contestants:

“All gave permission to be tracked as the state might track a fugitive—emails, cash cards and phones were monitored, houses searched and friends and family questioned.”

While the Channel 4 version was also heavily criticized for not being totally transparent with viewers, it still is more honest with its viewers about the “replication” disclaimer that flashes by in the credits of the CBS version:

“Where legally possible the hunters utilised the same methods of surveillance employed by the state, including open source intelligence, cyber expertise and interrogating friends and family. When the Hunters did not legally have access to those powers, the powers have been closely and carefully replicated.”

Compare that text to the ludicrously oversimplified rules that CBS offered.

So how did they do that replication? We only have one example, but it’s an interesting one. To replicate government closed-circuit surveillance cameras, the UK production started by identifying the location of those cameras:

“Over 800 Freedom of Information requests were submitted to establish the location of state owned CCTV cameras positioned throughout the UK mainland. When real footage couldn’t be obtained, our cameras captured footage which would have been available to the state and was stored on a central database (Gold Command) until requested by the hunters.”

That’s very clear: They first found out exactly where real law enforcement would be able to access footage, and then filmed it themselves, but the UK production didn’t just dump all of its footage onto the hunters’ computers.

Instead, it had a gatekeeper.

“In charge of making sure the production process accurately matched real life was former Head of Covert Operations for the Met Police, Kevin O’Leary. Kevin’s role was in Gold Command. He ensured that all of the information being requested and gathered by the hunters reflected the powers that would be available to them in real life, and within the appropriate time frame. Even the day to day team working with the hunters were separate from the team working with the fugitives to prevent information passing between the groups.”

More information about his role was included on a season-two web site:

“An independent adjudicator was in charge of making sure the process was fair. Former Head of Covert Operations for the Met Police, Kevin O’Leary, returned for series two to help ensure information requested and gathered by the hunters reflected the information that would be available to them in real life, and within the appropriate time frame. Kevin also made sure that the team overseeing the hunters worked in isolation from the team overseeing the fugitives, and that no information could be passed from one side to the other. Kevin was the only person empowered to release information about the fugitives to the hunters and was permitted to do this only when he considered the hunters had done sufficient detective work to justify it.”

Watching the CBS version, I wish that was on television.

In fact, it would make better television, because the lack of such information is even more frustrating to watch now that we know how they get it. The hunters appear to access information instantly and have infinite resources, even though we know that’s bullshit (for example, in the episode I fact-checked, the hunters pretended to search all car rentals, a database that doesn’t exist).

The fact that their information is actually coming from the TV production makes the whole exercise feel really pointless.

For the story I wrote two weeks ago, I did speak with someone connected to the production, who agreed to be interviewed as long as they were not identified. That person also wouldn’t give any specifics to my specific questions about the show’s rules. But they did insist there was a clear wall between the production following the fugitives and the hunters, and what they described seems similar to what the UK version had, though it does not seem like the CBS version has a third party investigator in charge of gatekeeping.

I understand a desire to protect the show’s secrets, possibly from future contestants, but not being transparent with your viewers invites distrust and weakens any arguments the show is trying to make about the surveillance state.

The hunters are not all-powerful. They’re just pretending to be the smartest kids in the class while the teacher gives them all the answers.