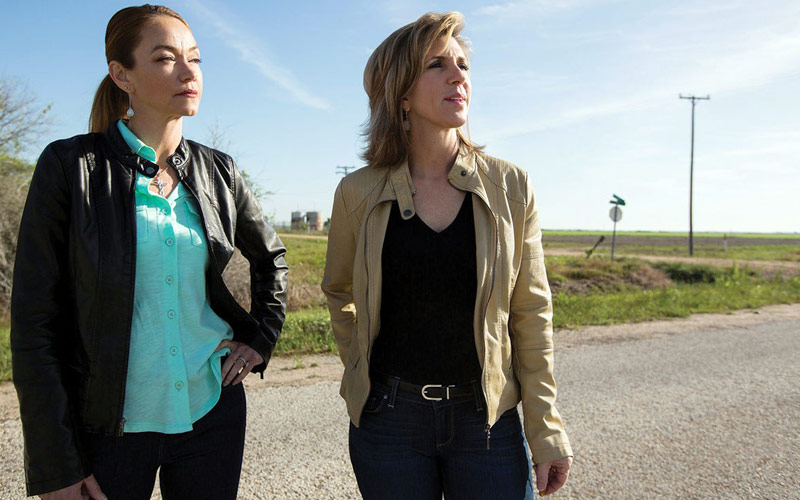 Yolanda McClary and Kelly Siegler, stars of Cold Justice, which has cancelled by TNT but has been revived by the new crime-focused Oxygen network. (Photo by John Nowak/TNT)

NBCUniversal’s Oxygen channel is becoming “a crime destination network for women” this summer, refocusing its brand around existing shows such as Snapped. Yes, at long last, women will have their own crime destination.

As part of that, the network has ordered a new season of Cold Justice, the show TNT unceremoniously cancelled for no reason other than the network had new leadership that was cleaning house. The show followed Kelly Siegler and Yolanda McClary as they reexamined old cases, which resulted in some successes, though the show was also sued for defamation by a man investigated in an episode.

(Last March, I reported that the show had been cancelled, and was surprised that, even as production company Magical Elves shopped it around, its cancellation was never reported elsewhere, except for a website picking up on a Facebook comment Yolanda McClary posted months later.)

Frances Berwick, who runs NBCUniversal cable’s lifestyle networks, said in a press release that Oxygen’s change is the result of successful crime-focused programming, which expanded from weekends to four days, Fridays to Mondays:

“The recent expansion of our Crime Time weekend block has enjoyed double-digit gains and has really resonated with our female audience. Oxygen has always played in this space with the highly successful original series Snapped, one of the longest running crime series on television now approaching its 20th season. With a lot of high quality projects in development, we believe our current fans, as well as all arm chair detectives, have good reason to be excited.”

Non-crime focused Oxygen shows, such as The Prancing Elites Project and Bad Girls Club, “will be phased out,” according to the AP. Though: Bad Girls Club’s existence is a crime against humanity, so it’d still work. Or the Bad Girls could be locked in prison, for real, without cameras.

Two new shows were announced Wednesday as part of the rebranding:

Oxygen was founded in 2000 by Oprah and others, but has changed ownership and branding several times since then. Its most recent rebranding was in 2014, when the network dropped its “Live Out Loud” tagline and replaced it with “Very Real.”

Back then, Berwick—who was also in charge of rebranding the channel—said they’d target “young female viewers” with new shows that “will deliver on the freshness, authenticity, high emotional stakes and optimism that this demographic is looking for.”