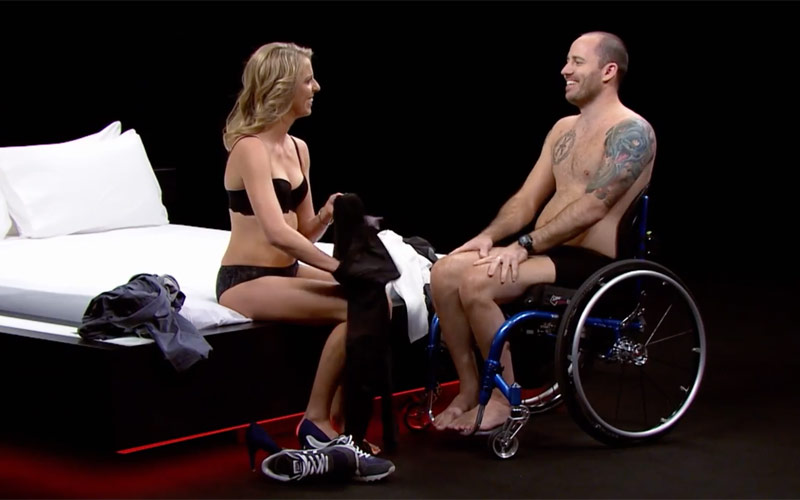 A scene from a promo for SBS' Undressed, a new hit international format.

Strangers taking off each others clothes and climbing into bed sounds like an average Tinder or Grindr date. But it’s also a wildly popular international reality show format.

Undressed gives strangers 30 seconds to undress each other down to their underwear and then climb into bed, where they talk, prompted by questions that appear on a screen. (It shares a name with the 1999 soapy MTV drama, but is unrelated.)

While the concept sounds potentially raunchy, it actually looks charming—there’s something disarming about undressing a stranger, it seems. Just watch this trailer:

BuzzFeed linked to that promo for the Australian version earlier this week, because Australia debuts its version on Monday, the UK’s TLC has aired two seasons; the Netherlands adapted the show; and Italy, where it originated, has aired four seasons.

I’m surprised FYI hasn’t already acquired the rights to this series, because it fits perfectly with their lineup of strangers-do-crazy-things-upon meeting shows: Married at First Sight and Kiss Bang Love, both of which are produced by Kinetic Content in the U.S.

Here’s an entire scene from the UK version. The most manipulative part comes at the end, after 30 minutes together, when each person privately decides whether or not they want to see the other again. Their decision is revealed on a screen, teased out Seacrest-style.

Zodiak Rights, which is selling the format, describes it like this:

“This hands-on social experiment format sees two complete strangers meeting for the very first time, and undressing each other in a darkened bedroom. With just 30 minutes to get to know each other, there’s no time to lose.

The large screen by the illuminated bed gives instructions and questions to encourage physical and emotional interaction. Within moments, they’re down to their underwear. Meanwhile, we get their profiles, with all the juicy details of their personal histories, and directions encourage the interaction between the couple. What happens when they hug for 30 seconds? Or gaze into each other’s eyes?

Based on a series of scientific tests that looked at accelerating the process of falling in love through heightened intimacy, and bodily contact,Undressed puts the theory into practice. After 20 minutes together, each couple faces the kiss test. Will embarrassment overcome them? Will they click or even fall in love? At the end, it’s decision time. Will they stay or will they go?”