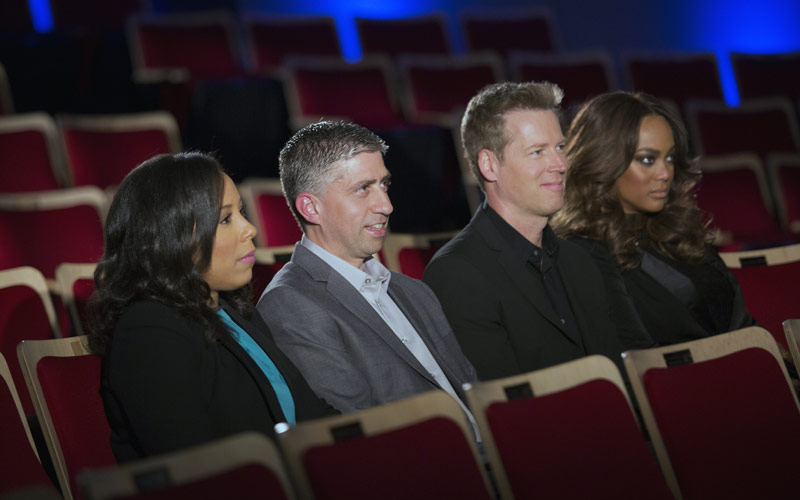 Trident executives Katie Williams and John Ghingo, along with Patrick Knapp Schwarzenegger and Tyra Banks are not amused in the second episode of The Celebrity Apprentice. (Photo by Luis Trinh/NBC)

The one thing I didn’t expect from The New Celebrity Apprentice is exactly what it delivered: boredom.

I went into the episode appalled and angry about several things, but also fearing that I’d love it, because I have thoroughly enjoyed this format in the past. Celebrities asked to do real things under time pressure has created some wonderful entertainment. But the first two hours, which were just two back-to-back episodes, had poorly chosen tasks and a ringleader, Arnold Schwarzenegger, who doesn’t yet feel up the job.

The new series was mostly a reminder of the show’s slow decline, and perhaps an indication that the format has run its course. Its ratings have been cut in half over its seven previous seasons—though they rebounded a little last season, in 2014, no small feat for any show in this television climate, and perhaps one reason why NBC ordered this season.

The brutal truth is that Donald Trump was a far better host, and especially better at managing the boardroom circus. Schwarzenegger is too much of a coward. In his most notable and most infuriating moment, he ignored Porsha while she was talking and turned to his advisor and nephew, Patrick. He whispered, in another language, “She never stops talking. It’s unbelievable, you know?”

Yes, it’s unbelievable NBC’s selection for a new host is a gross sexist like the last one, but one who won’t even allow those he’s demeaning to hear what he’s saying.

But that moment—though not the sexism—was an aberration. Mostly, without Trump, the host segments felt like an SNL parody, an SNL segment that airs close to 1 a.m. and was almost cut after dress rehearsal.

Even when Schwarzenegger was delivering lines meant to have gravitas, such as telling the celebrities the boardroom motto is “crush your opponents” or demanding Jon Lovitz call him “governor,” his efforts just kind of laid there. His attempts to connect his life experiences—comparing his discomfort bodybuilding with Snooki’s reluctance to point fingers—were wedged in.  The editing worked super-hard to emphasize anything he did say, with big audio flourishes, yet only called more attention to how weak it was.

Schwarzenegger may settle into the role over time. But now, it seems like he’s keeping a seat warm, not creating his own show.

All of the same elements, none of the entertainment

Of course, the host only bookends the show, and the majority of the entertainment comes from the cast tackling the challenges and each other. On paper, this cast seems like it should pop, perhaps because so many of them are now best-known for reality TV appearances. But the kernels are just sitting there in the bottom of the pan these first two episodes.

There was some last-minute tension between Porsha and Carnie Wilson that indicated they might be warming up, but meh. Even regular cast member and advisor Tyra Banks was deflated, relegated in episode two to summarizing executives’ comments.

There were moments of levity, for sure—Jon Lovitz’s improvisation is reliable comic relief, Carson Kressley delivers plenty of interview shade. Any surprise came from expectations versus reality. Kyle Richards seemed like she was asleep; Ninja Warrior host Matt Iseman out-charismed most of his more-famous teammates. (I recognize that I’m not highlighting any of the women, but the editing didn’t do that, either, perhaps because the women lost both challenges and the editing needed to offer rationale.)

The production itself changed surprisingly little for a show that was trying to distance itself from its previous version.

Los Angeles hosted a season of The Apprentice, back when the series was sinking into oblivion, so the location didn’t register as a difference. The new, airy set is nice, but Martha Stewart had a new, airy set, too, so again there’s nothing groundbreaking. Fired contestants leave on a helicopter, a nice touch, but there’s no chopper interview, presumably because of the noise.

The first boardroom was the same tired argument about project manager responsibility, the same arbitrary rules about bringing two people back in. There was the same non-stop parade of gender stereotypes, the same elevation of masculine characteristics as desirable, the same introduction of women as beautiful first and talented second.

Add the exact same music cues from previous seasons and the show felt the same, not like a refreshed version. It’s like the production was leaning a new direction, but perhaps network insecurity or a fear of losing the show’s existing fans stopped them from moving too far away.

Some of the production’s decisions were just baffling. Why on earth would they keep the secretary pretending to do work? Why would they have Schwarzenegger seeking approval from his advisers after making the decision?

Most baffling of all, why did anyone think that concealing the “you’re fired” replacement line (“you’re terminated,” followed by a rotating catchphrase) for almost a year would make it exciting? It couldn’t have come across as more underwhelming.

Another Mark Burnett series, Survivor, continues to iterate, sometimes falling on its face, but CBS has at least allowed the show to try new things. The Apprentice is just replacing pieces with similarly-sized pieces, starting with a host who groped and sexually humiliated women without their consent.

NBC sat on this season for almost a year, and it was not worth the wait.