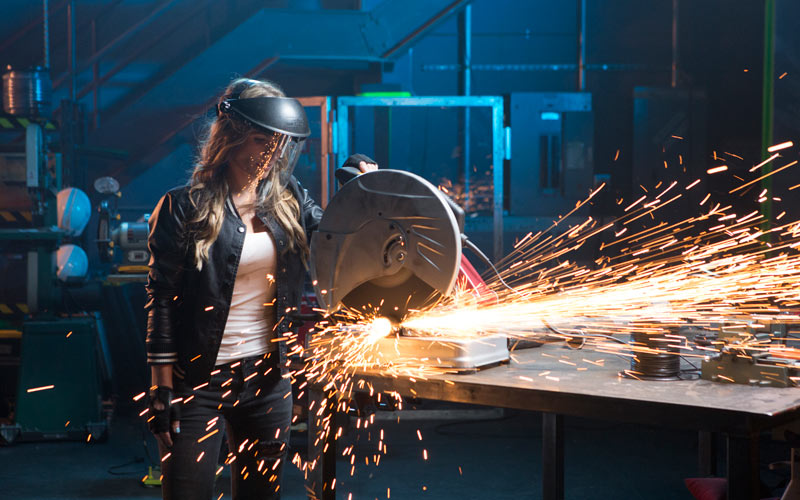 By the time Mythbusters ended its run a year ago, it had long since made its own title irrelevant. There weren’t myths left to test, so the show resorted to testing things such as the plausibility of movie stunts. After 282 episodes, it felt like the show had reached its logical conclusion.

So there’s a degree to which MythBusters: The Search (Science Channel, Saturdays at 10), a competition to find new Mythbusters, feels unnecessary—especially since its winners will go on to take over a new version of the series. That felt confirmed by the first two episodes, which asked the contestants to re-test myths that were already tested on the original show, with only a slight twist for the first. The second episode’s test—trying to paint a room with explosives—was tried three times on the original series.

Three times! I’ll admit my first response to this was disappointment: We have to watch the same thing again?

But the great surprise was just how watchable the show is. Having 10 contestants in two teams (for episodes one and three) and three teams (episode two) offers something brand new: seeing different approaches to the same problem.

It’s fascinating to watch each team reason through the problem and come to different—or similar!—solutions. Because they’re competing, there’s occasional friction over the best approach, though it’s task-oriented conflict, not overbearing faux producer-incited conflict.

The group tests a second myth in the middle of each episode; in episode two, the teams drank alcohol to see if it affected creativity. That just everyone having fun together, trying something out and seeing what happens, even if the experiments are a little ridiculous.

Altogether, MythBusters: The Search is a looser, more fun version of what was an already fun series.

So much of the original show’s host segments were scripted, and none of the five original cast members could pull that off with any plausibility. It was tolerable insomuch as they had to work through getting out some information to the audience before getting to work. Still, as a result, the original often felt like we were just watching a series of pre-planned moments.

While a few of the stand-up interviews with the MythBusters: The Search contestants can feel a little coached/forced, for the most part, everyone is just being themselves, not reading scripted lines. Even the host, Kyle Hill, Nerdist’s science editor, also speaks extemporaneously most of the time.

The lack of those stilted scenes on this spin-off is refreshing; it lifts weight off the show that didn’t need to be there.

There’s still narration—the original MythBusters narrator, Robert Lee, has returned—and it’s produced by the same team at Beyond Productions, so it retains the feel and heart of the original.

The only true stumble comes from the eliminations.

We’re told at the very beginning that the host confers with the guest judge “and the rest of the Mythbusters crew” to determine the eliminations. That’s an open and honest way of saying that the producers will help make the decision—and in this case, that makes perfect sense, because they’re selecting hosts for a show they’ll produce. I wish, however, we’d see those conversations. Instead, the decisions come from nowhere.

Those first two eliminations felt tacked on and not at all earned, mostly because the eliminated person has been all but ignored during the episode. In each case, there was a cursory attempt to explain why they were eliminated, but in both cases, it had nothing to do with their performance, or their teams’ success or failure.

The first two eliminees were not central to the episodes, and perhaps that’s why they went home—they were boring television. If that’s the case, I wish they’d just said that, because the reasons given just didn’t justify their exits.

At least the eliminations happen quickly; it’s just kind of like one person disappears between episodes.

The true climax of the episodes comes not from the competition, but from the teams testing their builds—and they’re not just testing the plausibility of the myth, but also their approach to the problem. In three episodes, there’s been a range of outcomes, from total failure to surprising success.

Watching these wannabe MythBusters captures something the original never quite did for me: a sense that this is truly exploration and experimentation happening in front of our eyes, and that anything can happen.