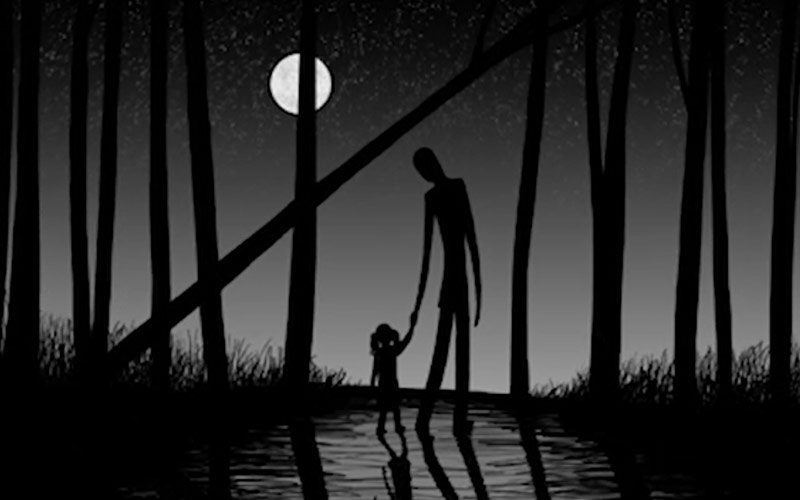 Art for the documentary Beware the Slenderman, about (Image by HBO)

HBO announced its documentary film slate for the first half of the year, and they include one man’s efforts to get animals classified as people, a detailed look at life and conflict in Syria, this bizarre thriller, and a profile of the band playing at the Bataclan in Paris when terrorists killed 89 people at their concert.

“…tells the true story of 12-year-olds Morgan Geyser and Anissa Weier, who lured their best friend into the woods, stabbed her 19 times and confessed they did it to appease a tall and faceless man known online as Slenderman. Featuring heart-wrenching access to the girls’ families, the haunting documentary plunges deep down the rabbit hole of their actions, exploring how the dark corners of the Internet can influence society’s most impressionable young consumers of media. This chilling film is directed by Irene Taylor Brodsky (HBO’s Oscar-nominated The Final Inch).”

“…the improbable story of an ambitious, numbers-obsessed boy from Nebraska who became one of the richest, most respected men in the world. The definitive documentary on Buffett, this candid portrait sheds new light on a man who has helped shape how Americans view capitalism and, more recently, philanthropy. Told primarily in Buffett’s own words, the film features never-before-released home videos, family photographs, archival footage and interviews with family and friends.”

“…an unflinching exploration of the lives of inmates and corrections officers in one of America’s most notorious ‘supermax’ prisons, built to hold inmates in 8’x10’ cells 23 hours a day, for months, years and sometimes decades. With unprecedented access, the film paints a complex, unexpected and deeply moving portrait of life inside a world rarely seen.”

“…spotlights the American rock band as they recount their experiences before and after the Nov. 13, 2015 terrorist attack in Paris that claimed 89 lives at their Bataclan Theatre concert. The film spotlights the group’s deep bonds with each other and with their fans, which inspired them to return to Paris to perform once again in Feb. 2016.”

Unlocking the Cage, Directed by Chris Hegedus and D. A. Pennebaker, Feb. 20

“…explores animal rights lawyer Steven Wise’s unprecedented challenge to break down the legal wall that separates animals from humans. After 30 years of struggling with ineffective animal welfare laws, Wise and his legal team, the Nonhuman Rights Project (NhRP), are making history by filing the first lawsuits that seek to transform an animal from a “thing” with no rights to a “person” with legal protections.”

“…follows journalist David Farrier, who stumbles upon a bizarre ‘competitive endurance tickling’ video online, wherein young men are paid to be tied up and tickled. Delving deeper, he encounters fierce resistance, but eventually uncovers a shocking story stranger than fiction.”

“…a searing account of the Syrian civil war from the inside out. The film draws on hundreds of hours of war footage from Syrian activists and citizen journalists, as well as testimony from child protestors, revolution leaders, human rights defenders, ordinary citizens and high-ranking army generals who have defected from the government. Many of those who have suffered through the violence and deprivation of the escalating five-year conflict have ultimately made a desperate bid to escape. Their collective stories are a cry for attention and help from a world that little understands their reality or agrees on what to do about it.”

documentaries not yet scheduled

“…presents a candid dialogue about one of the timeliest issues facing America today. The film sheds new light on the contentious subject, with a focus not on the debate, but rather on the women themselves: those struggling with unplanned pregnancies and the providers who show up at clinics to give medical care, as well as the activists on both sides of the issue, hoping to sway decisions and lives.”

“…a universal tale about navigating the ephemeral nature of art and value. Blending Pop Art history and personal narrative, the film follows the surprising trajectory of a beloved Andy Warhol Brillo Box sculpture, originally purchased for $1,000, as it makes its way from the filmmaker’s family living room to the global art market, selling for more than $3,000,000 at a Christie’s auction.”

For the Love of Baltimore, directed by Sonja Sohn

“…explores a city divided in the wake of the 2015 arrest of Freddie Gray and his subsequent death in police custody, which sparked weeks of protests and riots. Told through the journeys of local activists, police officers, community residents and gang affiliates, it shows a city grappling with its history of police brutality, as well as crime and decades of economic disenfranchisement, as six law enforcement officers are brought to trial, but none are convicted. This revealing behind-the-scenes look at what it takes to make change, when change is hard, shows a distraught and damaged community on an ever-elusive search for both justice and the common humanity of people who have previously seen each other only as adversaries.”

If You’re Not in the Obit, Eat Breakfast, directed by Daniel Gold

“Irrepressible writer-comedian Carl Reiner, who shows no signs of slowing down at 94, tracks down celebrated nonagenarians, and a few others over 100, to show how the twilight years can truly be the happiest and most rewarding. Among those who share their insights into what it takes to be vital and productive in older age are Mel Brooks, Dick Van Dyke, Kirk Douglas, Norman Lear, Betty White and Tony Bennett. Adding spice to this inspiring documentary are admirers from the younger set, including comedian Jerry Seinfeld (who’s already reserved the stage at Caesar’s Palace for his 100th birthday show), longevity expert Dan Buettner and Dick Van Dyke’s wife Arlene, who’s got all she can handle keeping up with her exuberant husband on the dance floor.”

“…explores a headline-grabbing crime in the age of social media. Things are not always as they appear in the case of Dee Dee Blanchard and Gypsy Rose Blanchard, and what starts out as a grisly tale of matricide morphs into a rabbit hole of deception. Child abuse, mental illness, forbidden love and a bizarre case of Munchausen by proxy syndrome converge in this mystery of a mother and daughter who were thought to be living a fairytale life that turned out to be a living nightmare.”

The Music of Strangers: Yo-Yo Ma and the Silk Rode Ensemble, directed by Morgan Neville

Rock and a Hard Place, directed by Matthew O’Neill and Jon Alpert

“…looks at incarcerated young people who are granted a second chance: the opportunity to trade an extensive prison sentence for a fresh start by completing the famed Miami-Dade County Corrections & Rehabilitation Boot Camp, a one-of-a-kind, six-month program in which drill sergeants push inmates to their limit, encouraging them to learn from past mistakes and become constructive members of society who are substantially less likely to return to prison. Dwayne Johnson, whose own experiences with the law as a youth inspired the special, appears in the film.”