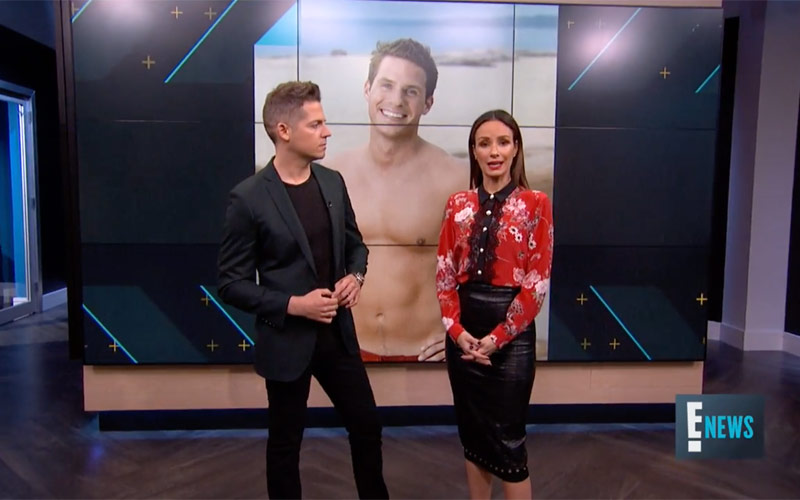 A clip from the E! News segment that pretended a Survivor's death was part of a fictional "curse."

The entertainment press picked up the story of Survivor Gabon player Dan Kay’s Dec. 31 death, but a CBS-owned media organization made a crucial error, and a celebrity-focused network’s news show decided to use his death to create a completely fictional story.

First, TVGuide.com made a simple but critical mistake: they illustrated their story with the wrong photo. Instead of Dan Kay, they used a photo of Survivor Gabon contestant Matty Whitmore, which has the incorrect caption “Dan Kay.” That happened even though they also embedded a video of Dan Kay that shows the two men are clearly not the same person.

Despite being called out on it via Twitter, the wrong picture has been up for almost a full day now. And TVGuide.com is owned by CBS, which airs Survivor.

What E! News did, however, was beyond vile: they exploited Dan’s death for a non-story titled online, “Why a Survivor curse could be real.”

A curse you made up could be real? As Survivor contestant Max Dawson wrote on Twitter,

[E! News,] 1) Go fuck yourself 2) Apologize to the Kay family and the #Survivor family for this garbage 3) GO FUCK YOURSELF

Let’s break down this piece of garbage television. The segment is included below because I have not transcribed 100 percent of it. Also, I think the tone is important to hear, because it’s beyond sensational.

The segment starts with host Catt Sadler saying, with that Be terrified of this! local TV news tone,

There are “lots” of questions? What are those questions? Neither Sadler nor co-host Jason Kennedy ever asks one of those questions—not one! Yes, we do not yet know the cause of death. There could be many rational reasons for the lack of information, and I won’t list them because I don’t want to even appear to speculate about why a 40-year-old may have died.

“Yeah, this is horrible. Dan Kay was just 40 years old, but he’s not the first competitor from the show to suffer such a tragic fate.”

Yes, three other people who appeared on the show also died. And their deaths were tragic. But notice how E! News already moved away from Dan. Instead of celebrating his life, E! News has decided to turn real events into a story with a fictional narrative: the “curse.”

“What once was a game of survival has now become a reality for these reality contestants.”

This is a completely useless, meaningless sentence. Sadler says some things about Survivor and then adds:

“…they weren’t able to avoid the Survivor curse.”

Okay, E! News producers, writers, and hosts: You are now completely making something up. A death wasn’t enough for you, so you’ve turned it into fake news.

“We do know that he isn’t the first Survivor to have passed away at an early age.”

Congratulations: You did some reporting in the form of a Google search. Emmys all around! Is this the kind of sentence that makes you think you’re practicing journalism instead of hurting other human beings and profiting?

The story then jumps from Caleb Bankston’s death and Jenn Lyon’s death to Ethan Zohn, who is very much alive, but he is included here because he had cancer “not once, but twice.” And then:

“Let’s not forget about Richard Hatch … that good life quickly took a turn for the worse.”

After mentioning that he went to prison for tax evasion, the story ends—at least, the online version of it does.

So yes, five people: three died, one went to prison for his own actions, and the other beat cancer twice and is thriving.

That’s the evidence for a “curse”?

There have been almost 500 people to play Survivor (Survivor Wiki counts 498). Of course there are going to be people who’ve died and who’ve experienced things that happen to people in real life.

E! News could have picked 500 people at random and found more of a pattern than this useless story did. But instead, they used their power to make up a story, when they could have instead told the story of a young man’s life and death.

Update, Jan. 6: Sometime late Thursday, E! News removed the video from their web site and turned the YouTube video of the segment, which was embedded below, private.