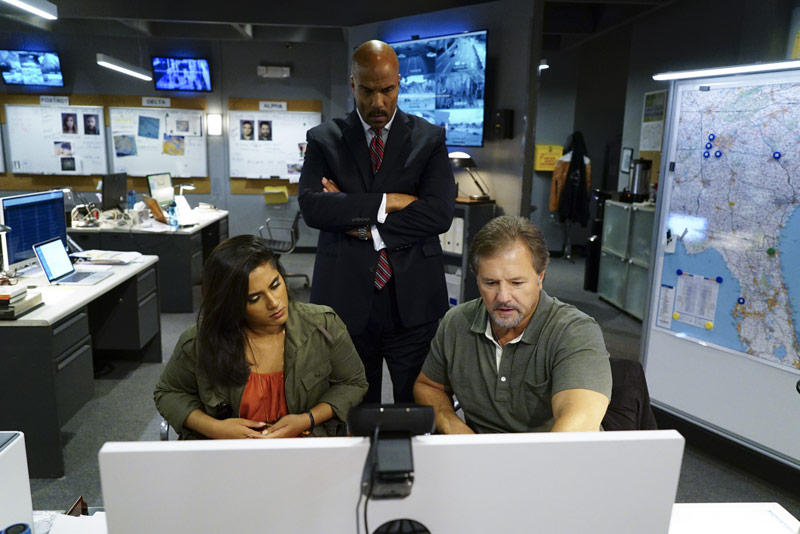 CBS’ reality TV superfan entertainment president, Glenn Geller, said more than a year ago that he’d found “the next great reality hit.” He was talking about Hunted, which is based on a 2015 UK series, but isn’t exactly a new format—many other series had similar games, all the way back to Manhunt in 2001 and up to The Runner last summer. But I was excited about the potential and went into last night’s episode anxious to see just how this game would be played.

Instead, it was a humorless, overly serious hour that over-explained everything yet withheld answers to questions that beg to be asked. Any time the show managed to get to a moment of tension, it interrupted it by switching to a different team, or having the narrator explain something, or cutting back to the command center.

And ugh, the command center. All of the footage from the command center felt like a recreation from an Investigation Discovery true-crime show, with everyone playing to the cameras in cloying ways. I tweeted during the episode that I didn’t think they were actors, but it felt like they were just going through the motions, but the show ended with a disclaimer that made me wonder:

“While the investigative techniques shown in Hunted are real, some procedures have been replicated for broadcast.”

Even that disclaimer is opaque. Does replicated mean recreated? Is that referring to scenes from the command center? If not, what else has been faked, and why?

While some of the investigative techniques were straightforward, such as the investigators looking through social media (usually completely exposed, as if anyone going on the run wouldn’t lock that down), most of it was not. The camera crews keep showing real-world surveillance cameras, such as those at an intersection, as if the command center would have access to those.

Where exactly are the investigators getting surveillance camera footage from? If it’s from actual surveillance cameras, that’s sketchy and scary, but of course they are not tapping government or private cameras and then just using that footage on a reality show.

A preview suggested they are able to access audio. From what? Cell phone calls? Random mics the production places around their four-state playing field?

And what about basic things like the fact that the teams have at least one camera operator with them, and are often being trailed by other camera crews, who not only make the fugitive team stand out, but also could potentially alert the production to their location—and probably are sending them footage like the faux ATM footage? (Plus: the camera operator likely has to make contact with production—or are they carrying 28 days worth of batteries, tapes, and food with them while filming?) That’s a big bunch of questions.

Hunted wants us to trust it, and tried so hard to pretend to be important, with the narration explaining that law enforcement can get warrants to search someone’s property (yes, thanks, this isn’t the first time I’m watching TV) but failed to explain any of the rules of the game to viewers.

Sometime during the episode, the lead investigator guy, Robert Clark, insists that all of this creepiness is “how we keep the public safe,” so in the middle of a game without rules we got a brief lecture on how it’s perfectly okay for privacy to be violated in order to catch bad guys.

We know this is a game, so just tell us how it’s played, please! Oh, also please cast someone who can play it.

Meanwhile, these contestants behaved so idiotically that it was jaw-dropping.

You’re going on a reality competition on which you know you’ll be tracked and you use the ATM at a bus station and then actually board a bus there instead of just pretending to? You write down every where you’re going to try to hide for the month— including addresses—on a calendar and then tear off the page and don’t notice that you’ve pressed so hard that someone can read your writing?

We’ve seen contestants unprepared for CBS’ reality competitions before, but that’s just ridiculous—so ridiculous that it felt like maybe it was being oversimplified in the editing somehow.

Although the show was cast by Lynne Spillman, of Survivor and Amazing Race casting fame, it has not yet introduced to us a team that seems capable of playing this game. A potential contestant actually wrote on Reddit that they applied for TAR but were called by casting for this show, which may explain other teams’ under-preparedness: recruits!

Despite all this, there were promising, real-life, dramatic moments during Hunted‘s first hour.

One team was being driven by a friend when another car turned in front of them and hit their car, and then fled the scene. That presents such a fascinating dilemma—the team is exposed, so what to do they do? Another team hid out at a friends’ house but their paranoia seems to have exposed them.

Those scenes—plus a preview that showed a team leaving the investigators a mocking note—will have me tuning in Wednesday. But if the show keeps trying to insist it’s real while not explaining what it’s doing and what it’s faking, I’m going to flee from it.