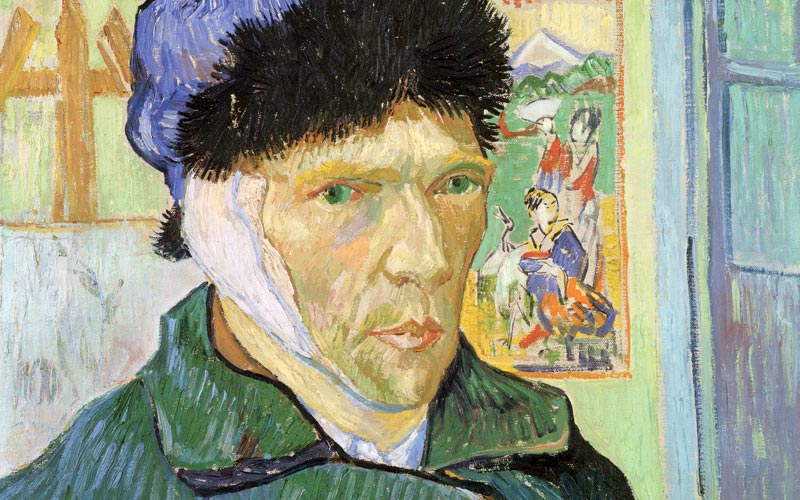 What is under the bandage on Vincent Van Gogh’s that’s depicted in this self-portrait of the artist who famously cut off his year? Is a tiny piece of his earlobe missing? Or did he slice off his entire ear? Did he give it to a prostitute, and what did that person have to do with lemonade?

The answers are not on Wikipedia, but they are in Wednesday’s Secrets of the Dead: Van Gogh’s Ear (PBS, 10 p.m. ET). In PBS documentary style, it tells Van Gogh’s story with terrific visuals, particularly the transitions between his paintings and high-definition footage of the actual places he painted in Arles, France. The narrator, like most PBS narrators, is also very fond of asking questions.

But it’s an hour worth recording and watching mostly because it tells the story of Bernadette Murphy, who spent seven years trying to solve these mysteries, which nobody else was able to solve since the events took place in 1888.

Wednesday’s broadcast—produced by Lion Television and Thirteen Productions for WNET—captures her seeing, for the first time in person, key evidence that answers the big question, and it’s a surprisingly emotional moment.

Bernadette later wrote the book Van Gogh’s Ear, perhaps the perfectly odd Christmas or Hanukkah present for the art lover in your life. The book, according to its publisher,

“…braids together her own thrilling journey of discovery with a narrative of Van Gogh’s life in Arles, the sleepy Provençal town where he created his finest work, and vividly reconstructs the world in which he moved—the madams and prostitutes, café patrons and police inspectors, shepherds and bohemian artists.”

At TCA last summer, Bernadette Murphy told critics that our understanding of Van Gogh is not exactly accurate:

“Everybody thought he was this lonely, solitary character with no money, ‘starving artist in the garret’-type cliche; and, in fact, none of that turned out to be true. He was a very friendly, lively man. … He was a very enthusiastic person, and he had other artistic friends. He had plenty of money. He had almost double the salary Roulin the postman who was his friend, who you meet in the film he is the person who looks after him the most after he cuts off his ear and really just spent money too enthusiastically.”

She also also said that the key piece of evidence was initially overlooked by David Kessler, who worked at the Bancroft Library at UC Berkeley, when she e-mailed him about it:

“And at first, David said there was nothing. And then I found a clue in the archives in Amsterdam, which took me on this journey, the magic of the Internet I live in a little village of 800 people in the south of France. It’s not exactly the center of the Western world and sent an email to David, who and then we began a few days’ correspondence. … And you will see in the film, when I see that bit of paper, it’s so incredibly small. It fits on my hand. And it was folded in half, and that’s why nobody had come across it. Who is expecting to find something major, a major discovery on Vincent van Gogh, in the United States. So that shows you should never give up and you never know because I bothered him. I think there were, like, 22 emails between us over a couple of days. ‘Could you try this?’ ‘Could you try that?’ But David was very patient. And so, when we met, it was great fun to be able to thank him in person.”