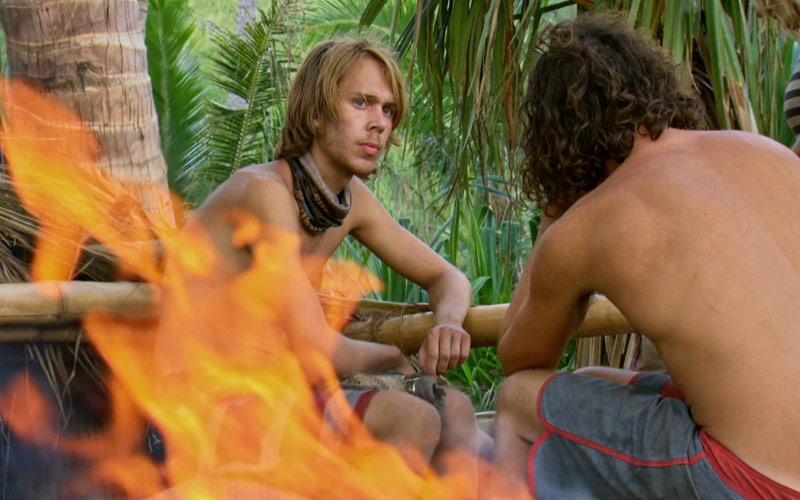 Will and Jay in Survivor's 13th episode, "Slayed The Survivor Dragon" (Image by CBS Entertainment)

The key moment in Survivor Millennial vs. Gen X‘s two-episodes-in-one, no-one-got-medevaced-shit-we-have-too-many-people episode came in the second half hour, when Adam and Jay were sitting together at camp. “We love each other but we hate each other,” Jay told us.

Two things happened during this: they bonded, with Adam sharing that his mom was dying from lung cancer, which caused Jay to immediately pull his buff over his eyes, overcome with emotion. He shared his own mother’s health issues, brain aneurysms, that have left him in fear that she’ll die. They cried quietly together, devastating—but also a reminder that these are humans who can still connect even while playing a very personal game.

That was preceded by Adam telling Jay to play his idol: it was kind of a warning, sure, but it was mostly one strong player telling another that it was time to even their playing field for the final stage the battle. Jay is a formidable threat from immunity challenges alone, so an idol just makes him an almost sure-thing of making it to the final three.

What that conversation—and what these two back-to-back episodes—did was clear the table. Will, Sunday, and an idol are all gone.

During the first few minutes, when Sunday first appeared on screen, it occurred to me that she was going to make the final three and get zero votes. She’d be rewarded for not playing hard, and for just going along with whatever was happening.

But that’s now how this group is playing. Sunday was, as Hannah pointed out, a certain kind of threat, one who threatened real players’ ability to secure a spot at the final tribal council and make a case.

The non-players (and, arguably, the over-players) are gone. The remaining six are mostly even with each other, minus a legacy advantage and some season-long moves.

Now we go into the finale without any obvious goats, and that is a wonderful way to start a Survivor finale.

Will you please stop talking

Will was the first to be voted out, having gone from swing vote last week to untrustworthy in a day or so.

The editing couldn’t have telegraphed his impending exit more obviously, starting with the sudden attention Will got this week and last, but culminating in his series of over-inflated ego:

Or you can just be voted out immediately for going from invisible to erratic, the classic playing-too-hard.

Everyone except Jay voted against him, but Will was truly gracious on his exit, turning to those who’d just voted him out and saying, “Have a blast, guys. Good luck to all of you.”

The path to these votes was through two immunity challenges that offered nice twists on frequent themes: balancing and puzzles.

The first required the players to carry discs, first balanced on a vertical pole while traversing a balance beam, and then balanced on a horizontal pole while stepping through ropes and navigating a maze with the discs themselves. But the real fun was at the end: rolling those discs on their side so they’d slide through a narrow slot. Jay was an absolute monster at this, flipping disc after disc that just effortlessly slid into the slot.

The second was just a puzzle, but with a Plinko/pinball twist. As Jeff Probst shouted nonstop, the real challenge was focus: trying to assemble the puzzle while keeping watch for a ball as it made its way down the Plinko board. If they missed it, the ball would travel slowly (what great challenge design!) down a ramp, a time penalty.

Ken won with an assist by Adam, who basically stopped trying to do his own puzzle to notify Ken when his ball was about to drop. (Ha!) I would have actually preferred more ball-dropping jokes to what Probst actually did, which was over-narrate. At least he was more restrained at Tribal Council, at least compared to usual.

And speaking of Tribal: My new favorite part is watching Chris scowl from the jury bench. The expression on his face is somewhere between about to jump up and punch someone in anger, and holding in a large and persistent bowel movement. Hopefully that will pass before he has to stand up next week and address the jury during Wednesday’s live finale.