Skip to Content
Adam, Dave, and Hannah during the Survivor Millennials vs. Gen X finale. (Image by CBS Entertainment)

During the final Survivor Millennials vs. Gen X Tribal Council, Chris used his time mostly to encourage the jury to vote for Adam. He gave Adam credit for “using your social game, your cunning, your intelligence, and turning Ken against the biggest giant in this game, something that no one on this jury did. And you did. Good job, young man, I believe you are the sole Survivor.”

Ken tried to argue that “it was my choice,” and of course, Hannah made this very argument to Ken before Adam did. But this jury was primed to see the world in this very way: to roll its eyes at Ken’s sanctimony (cue Bret) and ignore Hannah’s side-switching game play (cue Survivor’s sexism problem).

And then Adam told everyone what he’d only told Jay (it’s unclear if Jay told the jury or if it was new to them): his mother was dying. Being on Survivor, he said, “has been a personal dream of mine since I was nine years old,” and when he and his mom applied for Blood vs. Water, it became “our dream together.”

Adam fulfilled that dream for his mother, winning $1 million in a unanimous vote, and leading to a wrecking reunion moment when he revealed that “she died an hour after I got home.”

He also reminded his fellow players and viewers and Jeff Probst that what happened to him is “a beautiful story, and I can get that looking outside of it, but it’s real, it’s my life.”

In other words, it’s not just television.

But to talk about it as television: it was an exceptional arc for Adam, who would have been a deserving winner without suffering so much loss. Among other things, he found yet another idol that showed up super-late in the game.

There was also an exceptional arc for Dave, and for Hannah, and even for Jay. That was the strength of this final six.

Dave overcame his “dictatorship of fear and anxiety” and was a behind-the-scenes mastermind that the players gave credit to that the edit didn’t.

Hannah’s strategy seemed to be dismissed on Big Brother floater grounds, because it’s somehow unacceptable to navigate rapids by moving around them. Instead, people seem to value just taking the raft right across the top of the rocks. During the final TC, Hannah repeatedly made a strong and rational case, often arguing with Adam to defend her actions and explain her strategy. “Day 39 me is not going to take it,” she said at one point. But the jury did not buy it.

Also dismissing Hannah was Jeff Probst and Survivor itself. The reunion started with a focus on Adam, of course, but then shifted to David, and Zeke. Meanwhile the runner-up, a Survivor superfan who took a class about Survivor taught by someone who’d later go on to be on Survivor, was ignored.

When Probst finally turned his attention to Hannah, and played a clip, the focus was—wait for it—her crush on Ken. This is unbearably obnoxious, reducing Hannah to that moment, as if that was her most notable achievement. Sure, her interaction with Ken was charming when it happened, but there were far more impactful moments from these 14 episodes, during which she played deftly—after all, she made it to the final three.

Even Probst’s narrated introduction was quick to dismiss Hannah. While he said “she has matured into a dangerous player,” the edit included her talking about how focused she is, and then cut to her saying, “wait, is my armpit hair out?” So yes, Survivor’s illustration of “a dangerous player” was her concern about her appearance.

Survivor really, really needs to deal with its systemic and endemic sexism. 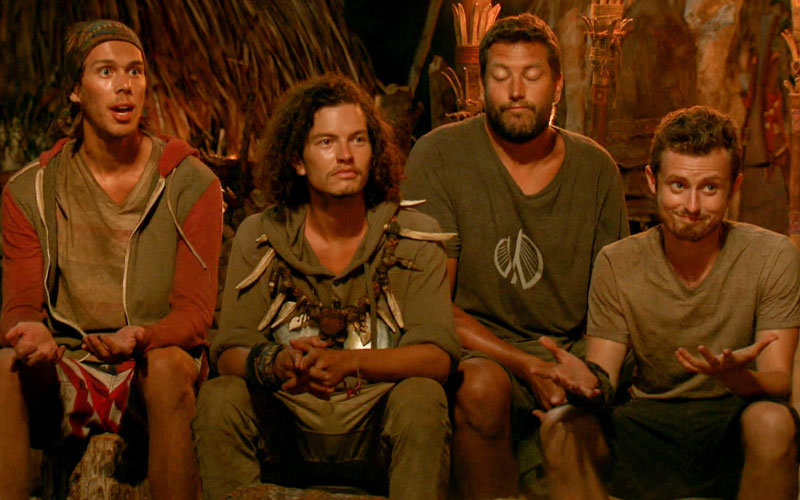 Will, Jay, Bret, and Adam at Tribal Council before Will was voted out of Survivor Millennials vs. Gen X (Image by CBS Entertainment)

Jay was the first out during the finale, but it was a perfect exit.

With his idol flushed last week, he was desperate for “a delivery from an angel,” he said.

He instead got a delicious delivery: David created a fake idol with paint, beads, and other things he’d been hoarding all season, and then stuffed it into a painted coconut. Though this new idol looked a little obvious even for Survivor idol vending machines, Jay fell for it, kissing the faux idol and starting to mock everyone else.

Aside: Don’t true hidden immunity idols come with a note of explanation?

Things continued to not go well for Jay. After blowing his lead in the reward challenge by letting everyone else cheat off of his finished combination lock, Jay lost to David (who was so bad himself it took him three tries to copy Jay’s combination). But Jay played his advantage, stealing the reward. This was the right way to do it: he stole the steak dinner from David, and then immediately chose David to join him, and also picked Adam (who gave him that reward in the first place). It’s a win-win-win, and no one could hold that against him.

At Tribal Council, he played his fake idol. It actually overshadowed the legacy advantage, which Ken played to make himself immune, though it was unecessary. (For my taste, that’s way too much power way too late in the game.)

After the vote, Jay played his fake idol, and his confidence made the moment so dense with tension that I wanted to pause and savor it. “I’m not going home!” he said, mocking his tribemates. “You gotta be quicker than that.”

Probst played this perfectly. “This is—,” he said, pausing dramatically but this time it totally worked, “—not a hidden immunity idol.” Probst added, “It is a work of art, but it has no value in this game.”

He tossed it into the fire, and Jay’s whole face tracked it as it flew across the Tribal Council set, his eyes widening in disbelief. But to his great credit, and making the moment even better, he seemed to be excited about being played so hard.

Even more incredibly, Jay’s vote for Ken was actually nullified by Ken’s legacy advantage, so Jay was voted out unanimously. Imagine, though, if the idol had been real, and all of the votes had been cancelled!

“It was mad fun,” Jay said after the votes were read. “Go ahead, Jeffrey. Snuff my torch.” Probst couldn’t help but laugh, and neither could I. For someone who I could barely stand listening to during early episodes, Jay really turned around as a character for me.

When Bret was voted out at the next Tribal Council—the product of David, Hannah, and Ken’s votes—he left with a little bit of bitterness, but he was also entirely accurate when he turned and said, “David, congratulations. The rest of you, you just lost a million dollars.”

Adam agreed, later saying: “We just put Dave, the biggest threat in the game, one challenge away from the final Tribal Council.”

But Hannah pointed out that, for her, “there was no possible path with Dave gone”—though she also recognized that Dave had to go next, telling Ken, “David is a gigantic threat.”

Ken, however, made a final-three deal with Dave early on. He also lives by A Code of Men and Beasts that only allows him to brood and pontificate. Talking to Hannah about why he could not turn on Dave now, Ken said, “I believe in trust and human relationships and people.” I believe that children are our future, but I also digress.

The only credit Ken did seem to get for his Coachiness was from Dave, who said that “Ken has brought a depth of trust, and loyaltyh, honorr and integrity, like no other Survivor, ever. Those things are extinct in this game.”

And that was after Ken ended up turning against Dave. Though notably Dave did also not vote for Ken to win the game.

The final immunity challenge gave Ken his fourth individual immunity win. It was a new stacking challenge, and while there were absolutely dramatic moments, the wind seemed to play more of a role than skill or strategy (Adam’s wait-and-see strategy seemed smart, despite Probst’s shouting).

After Dave’s torch was snuffed, he said, “Playing Survivor is the biggest dream I’ve ever had, and I’m so grateful I got to play it with all of you.”

And we are, too. This season had all of the elements that make Survivor worth watching 33 seasons in—flawed, round characters; alternately fascinating and frustrating strategy; disconcerting and disturbing trends that reflect the real world and need to be addressed by fans, players, and the show itself; and a group of people who came to play.