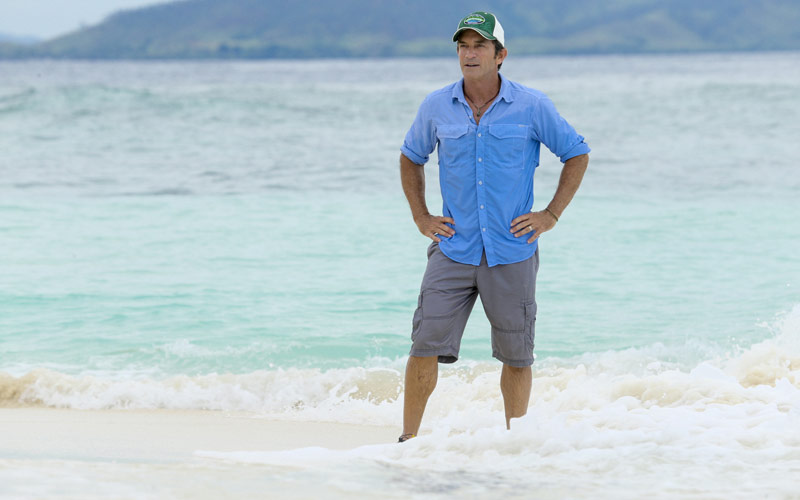 Jeff Probst standing in the waters off of Fiji during Survivor Millennials vs. Gen X, the first of two seasons to film in Fiji. (Photo by Monty Brinton/CBS Entertainment)

If it’s like every other season of Survivor, tonight’s one-hour Survivor Millennials vs Gen X reunion will end with the official announcement about the next season, which is called Survivor Game Changers — the Mamanuca Islands, which debuts in spring 2017 (though later than usual, in March).

Here’s what we know so far about season 34’s all-returnee cast; its theme and twist; and other details—all of which are spoiler-free about actual game play.

The original season 34 format twist had three tribes organized by their members’ success during their game:

However, the show was not able to cast an entire tribe of winners from the pool of people who were being considered.

Instead, the cast of returnees that was eventually assembled were labeled “Game Changers,” indicating that they’d all had a profound impact on the game.

Of course, as with most recent Survivor themes, the title is more arbitrary than accurate. (Just look at the Survivor Millennials vs. Gen X cast members’ actual ages, for example.) Some of the season 34 players had a profound impact on the game; others, not so much.

Here are the cast members, as originally identified by Inside Survivor, and divided by their initial tribes:

Cast flew to the location at the end of May, and filming took place in June and July. True Dork Times’ calendar has estimated dates for the season, and typically updates it as more information comes in.

The show was filmed in the same general location as Survivor Millennials vs. Gen X: Fiji, where Survivor filmed 10 years earlier.

Specifically, the production is set up in a chain of islands northwest of Fiji’s major island. The Mamanuca Islands provide this season’s subtitle, and also hosted the Tom Hanks film Cast Away.

The Survivor Millennials vs. Gen X finale previewed the season, and Probst even brought out some of the returnees, though he notably ignored Zeke, perhaps to keep his casting a surprise.

Here’s the preview that aired at the end of the reunion:

Jeff Probst tweeted in mid-November that the show was looking for new players to apply, though he cautioned against causal fans applying. Is that perhaps because a new Fans vs. Favorites season is ahead? Season 16 (Survivor Micronesia) and season 26 (Survivor Caramoan) were both fans vs. favorites, and since another 10 seasons has passed, perhaps Survivor season 36 will be, too.