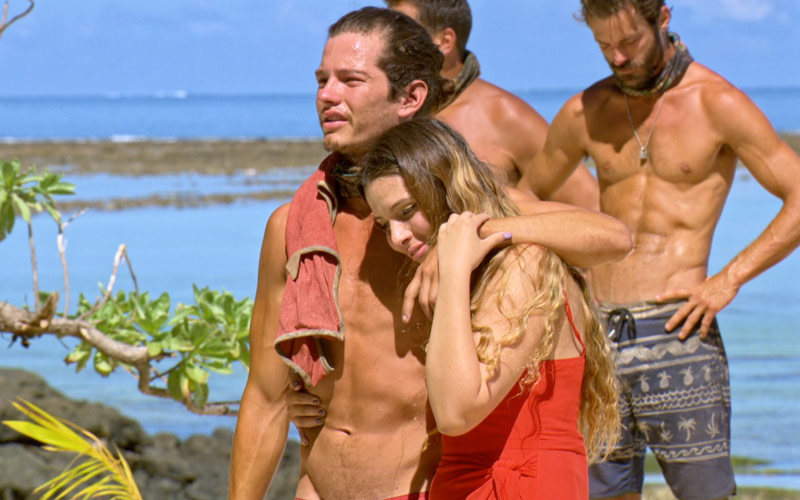 Jay and his sister during the Survivor Millennials vs. Gen X loved ones visit. (Image by CBS Entertainment)

“What does that feel like?” Jeff Probst asked during the Parade of Tears, the semi-regular wave of emotion brought on by the visits of family members of Survivor‘s remaining players. I imagine the other players—who were waiting for their loved ones to come out of the bushes while Jeff Probst had a Talk Show Moment—were thinking the answer to Probst’s question was something along the lines of, It’s absolutely unbearable to know my loved one is hiding back there while you blather on, you monster.

Curmudgeon alert: While I have no doubt the family visits are wonderful for the Survivors, as a moment on Survivor they’ve lost some of their power over the years, and they all sort of blend together.

But even for me, the Survivor Millennials vs. Gen X version felt a lot more devastating than usual, even with Probst’s heavy-handed attempts to make us care. Adam’s mother’s cancer was front and center, of course, and he got detailed updates from his brother, who made the trip to Fiji. This was especially heart-wrenching, learning that their mother had stopped treatments, especially knowing that she died less than two weeks later.

But there was also Zeke’s dad saying, “This is my hero.” There was Jay’s sister, and their teary reunion was deeply felt, even with her joking, “Oh my god, what did they do to you?” Every reunion was worth the wait.

Unfortunately, Jeff Probst and company flew family members all the way to Fiji only to have them sit on a bench. I really prefer family visits when the family members get to participate in the challenge—it raises the stakes, makes for an entirely different kind of challenge, and tells us more about the relationship. (Having Adam literally get stuck under a log would have been comedic in any other kind of challenge, but here it was just another layer of sad.)

The most emotional moment for me came after Jay won and—having chosen Will and Sunday to share in the reward because of promises he’d apparently made to them—Probst let him choose one more person. Jay broke down. “Me and Adam have been brawling this whole damn time, man,” he said. “He didn’t do it, man”—referring to Adam not stealing the reward from him.

Adam had pre-annnounced his decision not to take a family visit away from someone else (even though, of course, he could have just turned around and picked the challenge’s winner to join on the reward). “I can’t use it. I can’t take you guys away from your loved ones. I can’t do it,” Adam said.

That was very sweet—and although I don’t think he intended as strategy, it cannot hurt. Later, at camp, Adam actually gave Jay his advantage: also sweet but unnecessary, and maybe even a bad idea, since it could be read the wrong way by others. Forgive me for thinking strategy here, but it seemed like Adam understandably overreacted a little in both moments.

After the reward, and after an individual immunity challenge that Adam won, the usual camp strategizing was turned inside-out. For what actually happened—one player betraying another, the whole tribe finding out—it was oddly anticlimactic, though still consequential and amazing to watch.

Will found himself as the swing vote, but also found himself overplaying in order to stand out. His insecurity as an 18-year-old player is understandable, especially if he’s being condescended to and/or taken for granted by the other players. But he was clearly acting out of frustration: “I’m tired of using people. I want to work with people.”

Later, when Ken turned on Will, Will said, “How am I supposed to win at the end if I don’t have a resume?” This is an excellent point, but not exactly one that should be made out loud, I don’t think. It’s kind of like being in the middle of an endurance immunity challenge and saying, Hey, fellow competitors, I can’t win $1 million if I don’t have some challenge wins, so please all drop out right now so I can have this.

I honestly have no idea what the hell Ken was doing, because “I was testing you,” as he said to Will, makes no sense. The guy was trying to save your ass, buddy. (Zeke and company were worried that David wasn’t scrambling, so they assumed David had an idol, and thus changed their target to Ken—even though if David had an idol and played it for Ken last week, wouldn’t he do that again?)

When he was initially approached by Will, Ken shattered some viewers fantasies when he told the camera, “I don’t just have a five-minute conversation and then hop in bed with somebody.” He added: “I’ve got to know the core of a person: their integrity, their values.”

That sounds nice but came off as insufferable, and was hard not to agree with Will: “working with Ken is like getting your finger and toenails ripped out at the same time,” he said. “I have to deal with that crap.” Later, Will said, “This guy preaches about honor and integrity,” but “has the audacity to pull this crap on me.”

They did end up working together, with both of them voting for Zeke—who would have gone home even if Adam hadn’t played an idol for Hannah, who got the Zeke alliance’s vote. Zeke was a strong, entertaining player, but probably telegraphed how threatening he was a little too much.

The idol wasn’t necessary, but it was great television, produced from tucking worthy of RuPaul’s Drag Race: it came from Adam’s crotch, since he didn’t bring his bag to Tribal Council, and said that’s the only place he could hide it.

The game play is certainly continuing to escalate, and for good reason: We’re only two episodes away from the finale: next week is a double episode, with two Tribal Councils in one hour (i.e. two half-hour episodes), and then the two-hour finale Dec. 14.