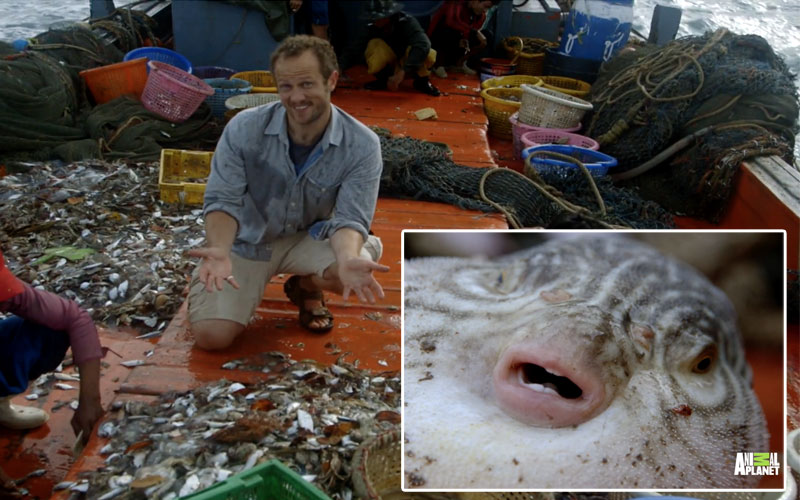 Journalist Jim Wickens on a fishing boat during the first episode of Ocean Warriors. Inset: a puffer fish takes its last breaths, having been scraped from the ocean floor to be turned into fish meal.

Animal Planet quietly debuted a new documentary series on Sunday that had a surprising and recognizable name at the start of its credits: Robert Redford, the actor and director. The second EP: Paul Allen, Microsoft’s co-founder.

Of course, they’re not on-the-ground reality show producers, but are still behind the new unscripted series Ocean Warriors, which follows people who are working to protect ocean wildlife. Six episodes will air over three weeks, with two episodes each Sunday at 9.

It is similar to Whale Wars—which Animal Planet effectively cancelled after airing a special in 2013 and a limited series in 2015—starting with the fact that it follows Sea Shepherd boats as they try to stop illegal fishing (not Japanese whalers) in the Southern Ocean.

But Sea Shepherd is only one part of the series, which flips between several different stories.

For example, there’s a journalist  who watches from on board a boat in Thailand as people ruthlessly catch and essentially destroy thousands and thousands of juvenile fish and other sea life, including coral. They troll the ocean, kill the fish, and sell the rotting remains to a company that grinds it up and feeds it to—wait for it—farmed shrimp that will be sold in the EU. Tasty!

Worse, their action hurts locals who fish sustainably because their mindless fishing also destroys fish traps. It’s not just the ocean that suffers, but also people and their livelihoods. Just watch:

This story, and the others, are well-told (the show is produced by Brick City TV’s Mark Benjamin and Marc Levin). Ocean Warriors has access and drama, and although I have a tiny attention span, it jumps between stories a little too often for my taste, usually to create minor cliffhangers at a moment of action or crisis.

Sea Shepherd is responsible for some of those, of course, with the first episode concluding with Bob Barker captain Peter Hammarstedt (he’s back!) sending crew members onto the deck in violent seas to secure a loose bumper. And when another Sea Shepherd boat finds gill nets left by a poaching vessel, they try to pull the net up, only to have the rope snap and drop the net to the ocean floor.

While the show is not Whale Wars, it feels very much like that show, just with a wider lens. The range of stories, which include an undercover operation that leads to police action, are a welcome addition, if only because Sea Shepherd isn’t the only organization doing work to help the oceans.

Here are the stories that the series follows, according to an Animal Planet press release:

“The young men and women of the Sea Shepherds chase a notorious, battle-hardened poaching ship through the dense ice of the Antarctic Sea despite the very real threat of violence and hazardous waters. In Tanzania, a conservation biologist strives to save the coral reefs from blast fishing, whose explosive impact could wipe out the marine life that sustains 18 million people. In the Pacific, Greenpeace patrols the waters for illegal shark fishing, exploring deep within a commercial vessel to discover a prolific and illegal bounty. An environmental journalist goes to Thailand, where illegal poachers are devastating a $7 billion national fishing industry as they pillage the ancestral fishing grounds. And, tragically, our vigilantes discover a vast human trafficking network of fishing slaves that extends from Africa to Indonesia.”

Above all, Ocean Warriors is both consequential and frequently dramatic, and although it’s making important and even educating, it never feels heavy-handed, but instead just lets us dip into these activists’ work, which would be happening even if cameras weren’t there.

I’m somewhat baffled by the scheduling, burning it off in December, and it appears this isn’t a high priority: This series is literally not on Animal Planet’s web site’s list of shows, though I did eventually find a page with video clips. Nor is there any information or materials for media on Discovery’s press web site.

That’s unfortunate, because this is the kind of reality TV that Animal Planet used to excel at—and clearly still can do very well, as Ocean Warriors demonstrates.