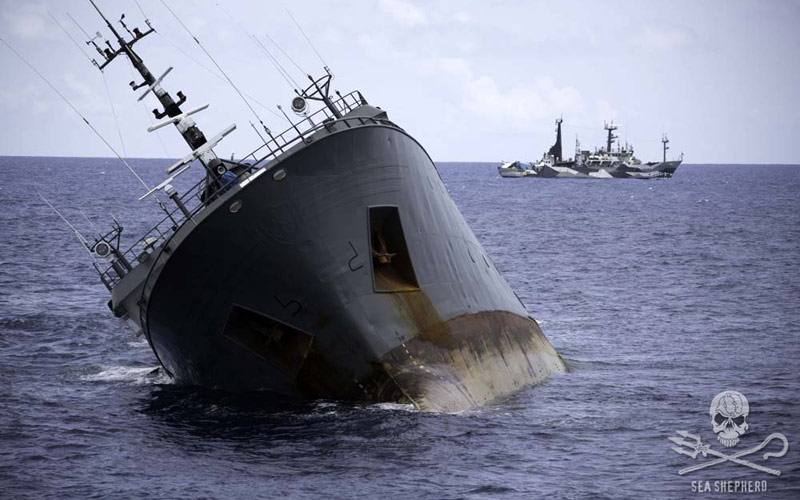 “You want action? You want drama? You want stakes? All the things you hear from executives over and over again—it’s all here. People putting their life on the line.”

And it’s on television in the form of Ocean Warriors (Animal Planet, Sunday at 9 p.m.), a series that has been years in the making, including 18 months of filming, only to have Animal Planet inexplicably burn it off over three weeks with virtually no promotion. While I am continually baffled by this industry, where quality and creativity are crushed under the weight of fear and Hollywood’s bad habits, I am grateful that the show made it to the air.

Ocean Warriors is produced by Marc Levin and Mark Benjamin’s Brick City TV, the production company they founded when they produced Sundance’s Brick City, which debuted in 2009 as the one of the first prestige reality TV shows: rich characters, immersive narratives, and attention to craft. They’ve gone on to produce thematically and structurally similar shows, such as CNN’s Chicagoland.

Levin told me that the series’ focus on different forms of illegal fishing “seemed like a good starting place. We don’t want too just do an environmental show or a conservation show,” and this particular subject provided a key element: “bad guys” in the form of people and criminal organizations who were fishing illegally.

Producers wanted Ocean Warriors to “play more like an action adventure or a crime show” and it certainly does. It moves between several different stories, all of which build tension, so it’s not just the Sea Shepherd chase (familiar to Whale Wars viewers). Though what happens with Sea Shepherd is certainly high drama because, as Levin said, it’s a “once-in-a-lifetime” story—”there may never be another chase of the Thunder, which is like Moby Dick.”

In episode four, an Australian fishing vessel, the Atlas Cove, joins two Sea Shepherd boats that are pursuing the Thunder. The Australians radio to the poachers: “These people behind you won’t let you go peacefully. Their reputation precedes them. So do yourself a favor, go home and stay there. And most importantly, make of yourself a responsible human being. We all have to care for the little that’s left of the sea, because if we don’t, there’ll be nothing left for our children, our grandchildren, or our great grandchildren.”

While Animal Planet still does not include Ocean Warriors in its menu or list of shows, it does at least now have full episodes on its web site, though they’re viewable only by cable subscribers.

Marc Levin told me it was “a tremendous logistical challenge,” though, like their previous city-set series, “it’s about people and stories trying to find the right people and the right stories.” In the case of this series, these are “front-line characters,” he said, people who are “trying to make a difference” and are “agents of change” or “warriors for a better world.”

Ocean Warriors has been a challenge throughout its production, starting with selling the concept. “There is a resistance to anything that has depth or that could potentially be controversial,” he said, though “people were attracted to the live action/adventure.”

Then there is the production logistics: “there are such concerns about legalities, insurance—these are legitimate concerns but you have to be careful that you can’t be over-lawyered.” But “anybody who’s financing something like this wants to be safe.”

Complicating that is “the confusion”: “no one even knows what the laws are on the ocean—it’s the outlaw ocean, that’s the whole point. … There’s a tangle of legal, insurance safety and just logitiscal issues that change country to country.” He added, “and then the most frustrating thing about doing anything like this is the unpredicatblity of weather, of tides—they can be postponed endlessly. That was tremedously frustrating, trying to coordinate all that with a television schedule.”

Once it was all filmed, there was even more to deal with, starting with more than 1,000 hours of material. They’d also licensed footage from Sea Shepherd, which had its own challenges (“tremendous technial issues—different cameras, different formats”).

“How to edit this? Do you try to do each story separately? Do you make it episodic? Do you make it serial? … Do you a need a narrator?” Levin said. “Those were fiercely debated, and so the post-production took a lot,” never mind the “number of different regimes they went through.” (The show was not produced as three two-hour episodes, which is how it’s now airing.)

During production of season one, Brick City TV “learned a tremedndous amount about how to do this” kind of series, Levin said, and so they’d like to produce a second season.

As Mark Benjamin, who directed the series, told me, the subject matter couldn’t be more important: “we’re going to lose [the oceans] unless we change”—though on television, “we try not to serve conservation as medicine, we serve it as entertainment.”

Levin added that “we think this could be a model,” one that other shows could use even if Ocean Warriors doesn’t continue. “We’d like to see the idea spread.”