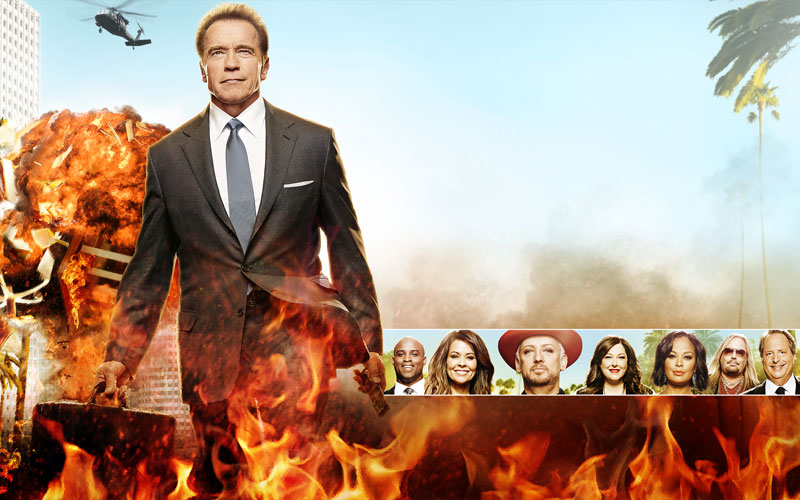 In just a few weeks, NBC will reboot The Celebrity Apprentice with a season that was taped last spring. Although it has a full season in the can, and although it is a format with great potential, NBC needs to immediately cancel the show.

There are two reasons for this:

The Hollywood Reporter reported today that MGM Television will pay Trump a per-episode fee, and “Trump’s name will appear after Burnett’s and before Schwarzenegger’s” as an executive producer, even though he has no involvement in the show and was fired from the series.

Trump spokesperson Hope Hicks confirmed this: “Mr. Trump has a big stake in the show and conceived of it with Mark Burnett. Additional details regarding his business interests will be shared December 15th.”

NBC may not be directly paying Trump, but by buying the show from MGM Television, NBC will be in the position of compensating the President of the United States, who should not have “a big stake” in a major television show.

Donald Trump already has “an unprecedented number of conflicts of interest for a United States president,” and this should not be another one. For just one example, when he receives money for The Apprentice, Trump will be profiting from a prime-time network series distributed by a massive corporation, Comcast, that his appointees will have regulatory power over.

Update: Trump also may receive “a cut of the money generated by NBC’s product integration deals for the show,” Dylan Byers reports, which means “it is now a potential avenue of influence for companies that want to get the ear of Trump and his administration,” and “that could include brands owned by foreign companies; private equity firms, which have done deals with the show before; or defense contractors that also produce consumer goods. Any company like these might have a vested interest in getting in good favor with the 45th President of the United States.”

Schwarzenegger was a bad choice

When NBC announced that Arnold Schwarzenegger would replace Trump, they said he’d bring a “fresh take.” But right now, his casting is simply a reminder of the show’s previous mistake: casting someone who not only says sexist things, but admits to assaulting women.

“When you see a blonde with great tits and a great ass, you say to yourself, ‘Hey, she must be stupid or must have nothing else to offer’, which maybe is the case many times. But then again there is the one that is as smart as her breasts look, great as her face looks, beautiful as her whole body looks gorgeous, you know, so people are shocked.”

Schwarzenegger also sexually assaulted women by touching them without consent in incidents that spanned more than 25 years, according to several women—whose stories resemble those women who came forward to describe how Donald Trump assaulted them, including a cast member on The Apprentice.

While this news about Schwarzenegger is not new (it’s more than 13 years old), what’s most notable today is that he did not apologize. What he actually did was give a bullshit non-apology:

“Yes, I have behaved badly sometimes, yes it is true that I was on rowdy movie sets … and I have done things I thought were playful that now I recognize that I have offended people. I am deeply sorry about that and I apologize.”

Notice that he admits only to offending people. But he touched women without their consent, which is assaulting them. Here’s what women said he did, according to a 2003 Los Angeles Times report:

“…three of the women described their surprise and discomfort when Schwarzenegger grabbed their breasts. A fourth said he reached under her skirt and gripped her buttocks.

Also, literally hours after Schwarzenegger said “I have behaved badly sometimes” and gave that half-hearted apology, he backtracked, telling reporters, “most of it is not true” and added:

When the revelations about Trump were coming out earlier this year, Mark Burnett said, “my wife and I reject the hatred, division and misogyny that has been a very unfortunate part of his campaign.”

But if he really rejected misogyny, why would he cast such someone with a similar track record?

NBC and Mark Burnett Productions already massively screwed up by tolerating a range of awful behavior on The Apprentice set, including a celebrity contestant groping a crew member, never mind sitting back quietly while Trump built a following on a racist conspiracy theory.

Now they are poised to repeat those mistakes. The fiery promotional image for this season was well-chosen, however unintentional it was.

But my love for that format allowed me to overlook what Trump was doing. NBC should not have tolerated Trump’s public racist pandering for as long as it did, and it should not tolerate the casting of another man who unapologetically and unacceptably touched and humiliated women.

And yes, I know this will not happen. NBC is busy sending out press releases about sponsors and charities, and advertising this new season. But I am an eternal optimist, and hope that people, even in business, and even in Hollywood, will do the right thing.